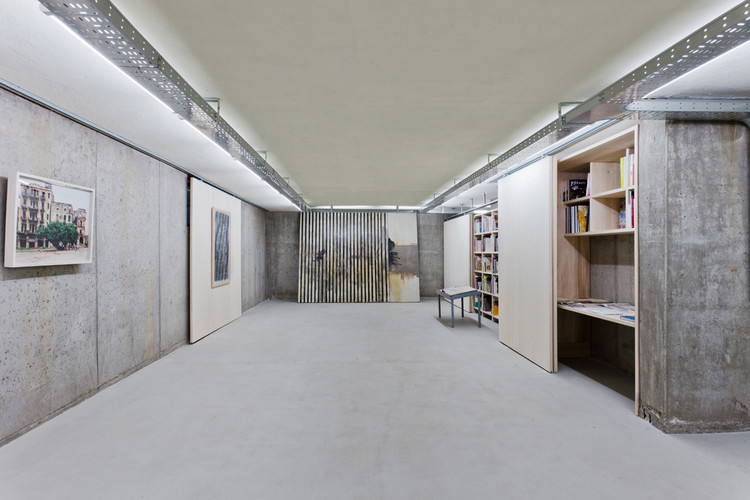 Text description provided by the architects. When Laura and Luigi Giordano, two young entrepreneurs and art collectors, bought and renovated a villa in Oleggio - province of Novara - to establish their residence, they decided to use part of the basement as a space for reading, listening to music and display artworks. Despite the intentions, the big room - 16.6 m long, 5.4 m wide and 2.4 m high - remained idle for some years and the artworks of the collection were left in the same wooden crates in which they had arrived.

In 2011 Laura and Luigi Giordano began to go often to and to appreciate Spazio 33, a new bar/cafeteria that BINOCLE had just completed in Oleggio, and asked the same designers to help them to transform their basement into an exhibition space.

The project is made of very few elements that leave unchanged the existing space to modify only its light, color and atmosphere. The galvanized trays - attached to the ceiling to host electrical cables - are kept and used as the support for the new linear lights replacing the existing ones, too large and technically unfit.

Poplar plywood sliding panels are hanged to galvanized iron rails and organized along the perimeter of the room. Sometimes the panels cover the existing ‘basement windows’, sometimes they work as sliding doors to protect and hide two big wooden libraries and a little desk.

Either way and above all the plywood panels are - together with the existing concrete walls - the support to display the artworks from the private collection. On the 6th of Ottobre 2012 Laura and Luigi Giordano opened their basement for art to the public with an exhibition entitled ‘Johannesburg’ featuring works by Gabriele Basilico, Piero Pizzi Cannella, David Finn, Mona Hatoum, William Kentridge, Anselm Kiefer, Saba Naim and Pascale Marthine Tayou. 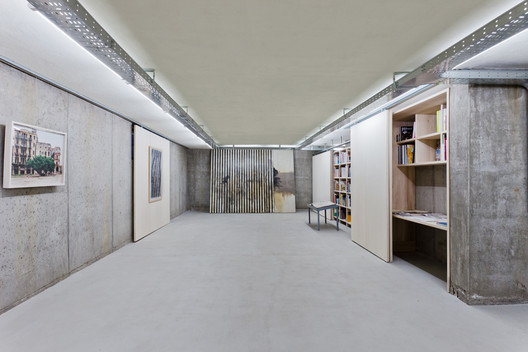