Since the Périphérique ring road was covered (a decision taken in 2000), the ambition of local authorities and residents has been to make the Porte des Lilas Joint Development Zone not just an outer limit of Paris, but an attractive centre in the East of Paris. The open section of the Périphérique and the nuisances it engenders have been replaced by a new, bustling neighbourhood which hosts a range of housing, activities and parks.

The Porte de Lilas now stands out as an example in the development of Metropolitan Paris.

The Cinéma Étoile, designed by the Hardel & Le Bihan architecture agency, puts the finishing touch on the transformation of this site and makes up for the scarcity of cinemas in the East of Paris.

Located on the Place du Maquis du Vercors, and a stone’s throw from the Rue de Belleville and the Avenue Gambetta, it serves as a linchpin to the neighbourhood, echoing a deeply polarized urban context. With the Cirque Electrique and the Jardin Serge-Gainsbourg for neighbours, it is an active participant in the renovation of this neighbourhood in Paris’ 20th arrondissement.

- an urban challenge, related to integrating cultural facilities into the context of the outskirts of Paris;

- a functional challenge, related to articulating the cinema’s seven screens and the incoming and outgoing flows of visitors, in relation to the square.

SEMAVIP’s development plan aims to improve links between Paris and its nearby neighbourhoods, and enhance the Porte des Lilas neighbourhood.

That is why the Etoile Lilas is designed as a city cinema: vertically, in a physical and visual relationship with its environment. The building has been divided into two volumes (cinema and shops). The public space of the square is thus put to both these uses, making it easy to pass between one and the other.

To the north, the tall, compact volume is made up of the screening rooms, stacked on top of one another; its bulk is an extension of the Paris-Suburbs road.

To the South, the lower volume facing the Pavillon de Cirque contains shops. These two volumes outline the square, which defines their relationship with the ground.

A large terrace devoted to the art of film hangs over the volume which accommodates the shops.

While the building is divided along a North-South axis, the four facades are uniform. Visually, there is no angle which casts the building in a more or less favourable light. The facades open up, revealing the Paris side (on the square) as much as the Lilas side, on the Avenue du Docteur Gley, which remains an unobstructed view.

The two programme entities are clearly identifiable on the plot:

- the cinema is set opposite the Place du Maquis du Vercors and the future garden, alongside the Rue de Paris, its dimensions within the limits prescribed by local building regulations.

- the shops adjoining the cinema are located on the Cirque side. The shopping area is designed to host two catering establishments.

In accordance with its programming requests, the cinema counts seven screens and 1499 seats. Screens 5, 6 and 7 are sat on top of the shopping vo- lume. Screen 3 is dug into the entrance hall. Screens 1, 2 and 4 are superimposed on the hall, lending the building a monumental quality.

The entrance hall, on the ground floor, provides an extension of the square through the building to the Avenue du Docteur Gley. The three screens in the superstructure are suspended above this space, stacked in order of increasing capacity (reverse pyramid), to free up a space for visitors to walk through.

The distribution system is wrapped around the volumes of the screening rooms, orchestrating the opaque screening room facades. The wealth of openings and passages is emphasized to produce a multitude of possible entrances and exits.

These paths through the volumes correspond to so many panoramic views of the square, the neighbourhood or the city, from above or below, up close, or from a distance.

The entrance hall is accessed from the square, facing west. The south facade presents a view over the Cirque, the Périphérique, and the Porte de Bagnolet. The east side looks out over Les Lilas and along the Rue du Docteur Gley. The Jardin Serge Gainsbourg and the Saint-Denis Plain are visible from the north facade. In the entrance spaces to the screening rooms and the exit chambers, the city is a backdrop.

The cinema building is designed around the structural and functional stacking of black «onyx» concrete-cased screening rooms. Movements of visitors pre- and post-film are dealt with differently:

- three superimposed, heated, escalators encased in glass provide access to the screens, in an extension of the hall;

- the screening room exit staircases lead mainly to the neighbourhood road, and the Avenue du Docteur Gley are in the open air, though sheltered.

Making their way to the waiting landings before screenings, leaving after films, the flow of visitors becomes a design element of the site, in the same way as the movements of metro or bus users, or vehicles on the Périphérique ring road.

The cinema complex thus offers very open vistas for pedestrians, in conversation with their immediate surroundings (the square, the Périphérique ring road, the rooftop garden) and those further away (the Plaine Saint-Denis, the Seine-et-Marne valleys).

The cinema is extended by a large open air terrace which sits above the foundation of the shopping building. It is managed by the cinema and has a 400 person capacity.

With a 700m2 surface area, covered and heated in winter, it pro- vides panoramic views over the neighbourhood.

The terrace is connected to the entrance hall by two staircases and to screens 1 and 2. It is a mineral structure which houses a garden made of pot plants, echoing the rooftop garden, with a shifting spatial configuration depending on its use: cocktail par- ties, open air projections, events, film festivals, etc.

This playful, labyrinthine garden defines the outlines of spaces and micro-spaces all of which can be appropriated. 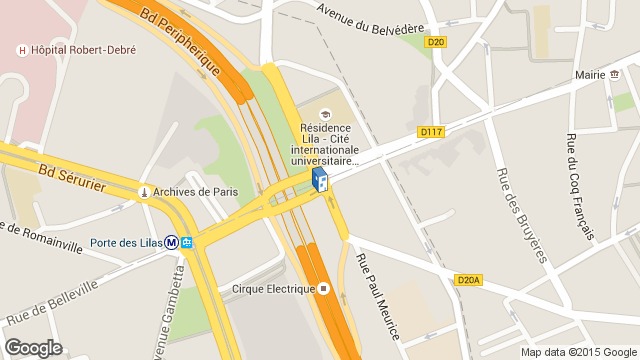