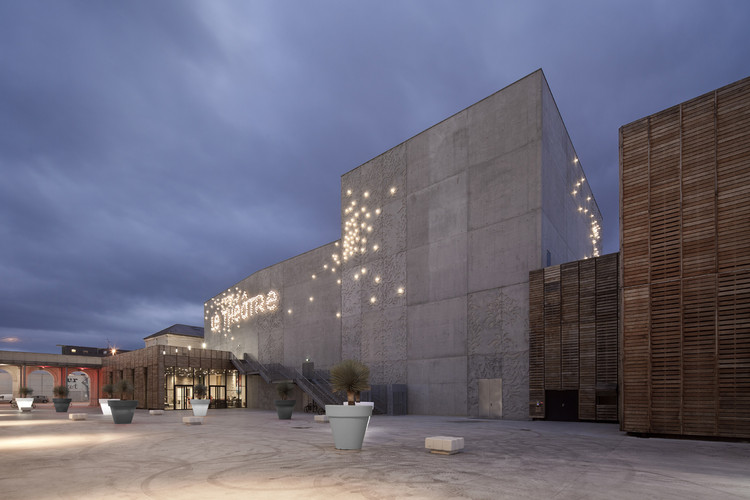 Text description provided by the architects. The theatre draws inspiration for its materials and style from its immediate surroundings. Its monolithic mineral bulk is borrowed from the giant bunker and its rough-hewed shape is borrowed from neighbouring utilitarian designs. Concrete is conferred sovereign status as a material. It is smooth in parts, chiselled in others. Here and there, it is adorned with a floral imprint pattern providing a classical link to the station and to romantic theatres.

This imprint, inspired by a 17th century French silk textile motif, has been scaled to the size of the building - a simple ornamental feature trans- posed to the relief of the material itself. In places, this relief is so deep that it digs into the concrete walls, taking the shape of rosettes.

The cement facades are made using two types of procedure: “cast in place” for the smooth parts, and prefabricated for panels with imprints or perforated by decorative patterns. The largest of these panels, assembled using a crane, weigh up to five tons. The perforated facade patterns shine a soft light into a spacious environment with a ceiling height of 11.50 m.

The theatre answers the requirements of a «national stage» which makes it a very high standard tool.

The auditorium and stage make up the main concrete structure. The other annex spaces (the hall, the rehearsal room, the dressing room and the technical premises) are laid out, as if in storage, along its flanks. Their volumes stand out with their chestnut cladding, fitted to directly echo stacks of racking used by industrial sites.

Access
Audiences enter the theatre via the old station arcades, as well as from the new car park built to the North.

Ticket office and administration pavilions
The pavilions have been restored, retaining marks from their history, including scars from bombing and the long period during which they were abandoned, when their openings were walled up. Thus, their bays have been partially reopened. The eastern pavilion, furthest from the theatre, houses the administration.

The western pavilion, formerly the buffet in the station, is home to the ticket office. This space is fitted with ten panels which formerly adorned the walls of the show room in the ocean liner France (1962-1979). They were removed when the transatlantic liner was reconverted into an cruise vessel . The pannels were bought by the city of Saint-Nazaire in an auction in Norway The Mayor of Saint-Nazaire then asked the architects to find a special place for them in “his” future theatre.

Entrance hall and foyer
Once past the arcades, the audience enters into the interior courtyard then, on the left, crosses the entrance hall which gives onto the main staircases leading to the auditorium.

The space is designed as a neutral entity, providing a fluid transition between exterior and interior. With its minimal design, it slips discreetly in between the theatre and the station frontispiece. Its roof terrace, accessible during opening hours, extends as a footbridge to the second pavilion - a possible future connection.

It spans the Place des Frères Pereire and may be used as a frame for outdoor elements of a set. Approaching the auditorium, the hall becomes a foyer and takes on the stature of a monument, rising to the full height of the structure. Functional staircases, dressed with perforated railings with a finish reminiscent of the France panels lead upwards and suggest the scale of the auditorium. From the foyer, the audience can access three levels in the auditorium. The right and left hand side galleries lead to the lower stalls on the ground floor and the upper stalls on the first floor, with a 530 seat capacity. The balcony (296 seats) is accessed via the two second floor galleries.

Bar
The bar is open to the audience at intervals and after shows. In good weather, it may extend to under the nave. The provisions for bringing a set into this area means that short responses to shows in the main auditorium can be performed here. Inductive loops have been planned for people with impaired hearing.

Auditorium
The design invites complicity between the raw expression of the stage and the luxurious red velvet world of the classical theatre auditorium. The room seats 826. The stalls by themselves provide seating for an audience of 550, including 110 raked retractable seats which give place to an orchestra pit. A balcony which stretches around the auditorium on both sides provides 350 extra seats.

The design thus places the audience at the heart of the auditorium. Experience has shown that the audience has more of a feeling of being in the show when laid out in this configuration, and their focus is more intense.

This auditorium is sober and solid, as if hewn from the stone in a quarry. The thick and gener- ous textile on the seats is the only concessions to comfort. This contrasting juxtaposition has been sought to create a quasi dramaturgical connection between spectators and auditorium during the minutes before the show.

Stage and backstage
In the auditorium, a 3 m deep and 16.7 m wide proscenium arch extends into an orchestra pit which provides space for an extra two rows of seats. Six seats for persons with reduced mobility are spread over three levels, with inductive loops for audience members with impaired hearing. There are also three platforms for lighting equipment, a closed lighting box, and a possible area for a lighting box between the audience and the side galleries.

Under the entirely “removable” floor there is a space 3m deep. A grid is used for moving scenery, machinery, lighting, or sound equipment. Above, there are three platforms which serve as rigs: The first is 10m high, for lighting, the second 13m for machinery, the third, 16m for loading counter-weights.

Rehearsal room
The rehearsal room provides artists with the space needed in any creative process. The room provides wonderful flexibility: resident artistscan prepare their shows in real conditions. At the same time, a show can be performed in the main auditorium, thus ensuring continuity in programming.

The rehearsal and devising space is specially designed for ideas, research and creative work. This room also has space to set up scenery to test lighting states on it, as well as on actors.The floor is laid on a double ledger board, for dancing. Lighting equipment is attached to a platform which runs right around the playing space.

Patio, dressing rooms and artists’ foyer
The devising centre and the dressing rooms are located behind the backstage and are spread around a private patio. Several comfortable dressing rooms with sound and video links have been designed. Next to them, the foyer provides artists who are performing or are in residencies with a space to eat and relax.

Technical premises
The technical premises are spread around the delivery area on the northern extremity of the site and provide direct access to backstage, the workshops and the devising centre.

The technical area is dressed in resistant wood, while in the public space, light and luminous concrete alternates with engraved patterns. The technical gallery, which is decorated, is the waiting space for artists. This is also where the building’s utilities can be accessed (electric cables, rain water piping, etc.)

Loading bay
All types of lorry can unload parts of set and materials for shows, out of the way of bad weather and the audience’s view. Equipment is unloaded directly onto the stage, into the rehearsal room, or into the storage room opposite. 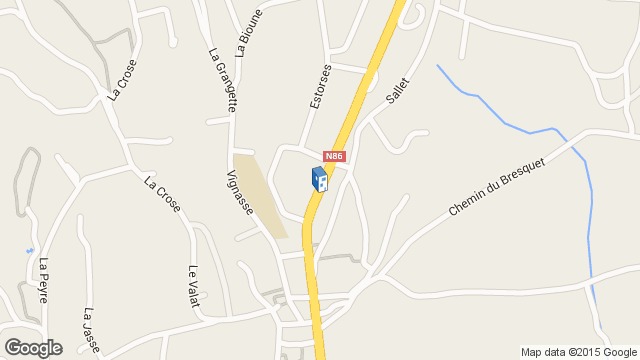 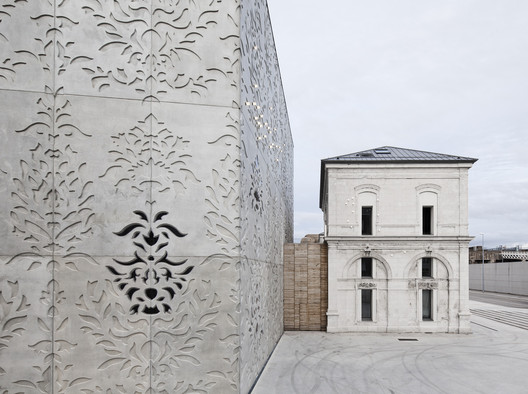 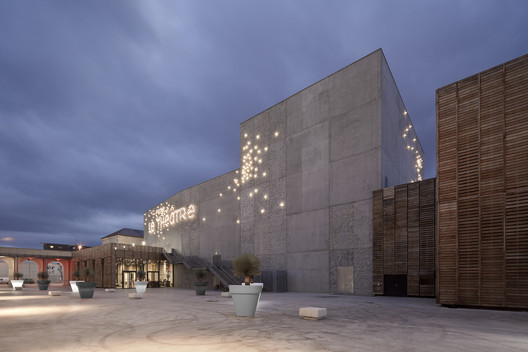