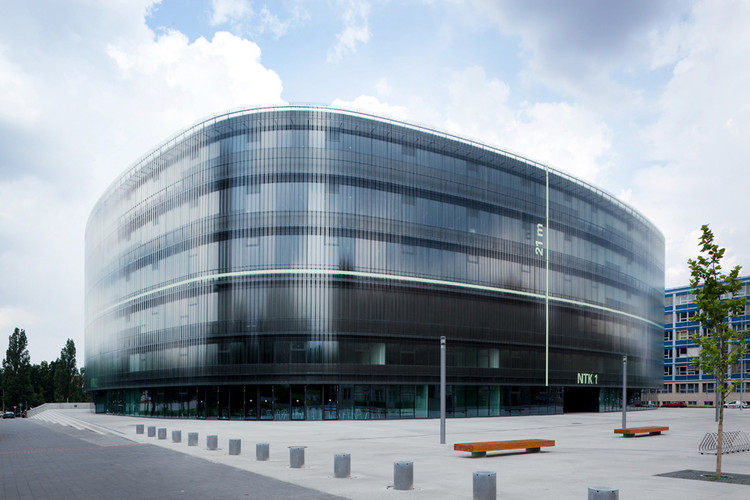 Text description provided by the architects. The idea of the new technical library is quite old and started in the 90's. The architectural competition took place in 2000. The investor is the ministry of education on behalf of the State technical library. Our design got 1st prize among approximately 50 proposals. There wasn't any second prize and, instead there were three third prizes. Afterwards, there was a time gap till the year 2004 in which the ministry of education chose to sponsor another competition to decide who would continue in the building design. After the plans where finished in 2006 the developer Sekyra Group was chosen to construct in a PPP like program. The real building contractor was then the partnership Metrostav - OHLŽS. Building construction started in the year 2006 and was finished in January 2009. Currently books are being moved in.

There are more sources of the architectural concept of the building. Firstly there is a spatial context influence which involves the historical urbanistic plans for the whole area as well as its present significance. Secondly the concept is our answer to the idea of the institution and especially to the role of the library in today's society. That is why on the groundfloor there is a minimum of the library itself unlike all the complementary services such as the cafeteria, exhibition hall and congress hall. Next the chosen shape and material should resolve one of crucial question of how to be modern and monumental at the same time. And, what is important, the building from the very beginning was formed to be energy saving one and the shape show it clearly. Part of the concept is as well the use of the area around the building - social space on the west and a green park on the east. Finally, the building was designed to include the interior and the graphic design following the concept "the technological schoolbook", so a lot of things (for example installations) are knowingly shown for better understanding how the building was designed and functions.

The building has three underground and six aboveground floors.

Underground there is book storage, technology, supply and a parking lot.

On the ground floor and the second floor there is the main entry to the library and all complementary facilities - conference hall, exhibition hall, cafeteria, bookshop and cloak room. All of them are around the entry hall which is the main place for meeting people not just from the library but from the whole university campus. That is the reason why the building has not one but four entrances to all sides. The idea was to give to the campus, not just a library, but a needed public place as well; where all the students could meet together. The entry hall doubles as a square for bad weather days (in summer the campus is empty). Additionally, there is a night study room on the ground floor so the building can provide the 24 hour service without needing to open all the building during the night. In the middle of the groundfloor is the entrance to the library and first info desk. The visitors then follow up to the second floor and the atrium hall with the main desk. The atrium is naturally lit through the skylight and it is the main space of the whole building. Then the library floors follow from third to sixth. The setup is similar. On the north side of the floor there is the administration section. In the public part there are the study places and study rooms of different sizes next to the façade, followed by book shelves in the darker part of the floor and finally an info desk and other study places around the atrium with natural light. This plot mirrors not just the natural light level in different parts but also helps to distribute the warm gain from the sun and to differentiate acoustic demands. For administration the open space-system is used. Each floor is a little different but the main orientation points remain. More differences are found in the last floor where two open atriums give the chance to read under the sky, and is also where individual study rooms for rent are located.

In construction of the building many interesting technological solutions were used. Some of them help the flexibility, the others help save on energy demands.

The construction itself used columns in a 15 meter grid with, in both directions, pre-stress concrete slabs. The statics deflation diagram for floorslabs pre-stressing was used for designing the floor, so you can imagine how the strength in the construction goes.

The concrete corn activation system is used for the heating and cooling. There are plastic pipes directly in construction slabs with a medium whose temperature is changing according to demands during the year. This system perfectly suits the open space of the library. In addition, there is an easy system for pre-cooling the building during summer nights just by natural ventilation via opening windows.

The main façade is divided into glass and blind parts on the surface in a ratio near to 50/50% in order to optimize the amount of heat energy.

For the surface of the ground floor an asphalt-based floor covering material (bitu-terrazzo) was used. It significantly reduces noise levels in the building.

The fire prevention system is an automatic water mist-spraying fire extinguishing system which is more property/asset-protective, plus it does not require a large-capacity storage vessel.

The roof is covered with extensive green to create the fifth façade of the building for views from surrounding higher buildings. It also slows down draining in case of heavy rain.

The interior is very open and friendly to express the openness and friendliness of the contemporary institution. The main elements are the power-colored floor and the orientation of all lighting which point to the very middle point of the building. In every room you are sure about your position. Some furniture was developed especially for the library to give visitors a free-minded feeling. They are movable so the students can build their own constellations from them. The main principle of interior design is about collaboartion and reciprocal influence.

The important parts of the interior are the graphic design, which follows the technical schoolbook concept, and the art. We invited an art curator with the group PAS (production of contemporary activities) to prepare an art scheme for whole building. From the big scheme only the central artwork remains because of the lack of money. There was an international competition for this job and the famous artist Dan Perjovschi won. So now you can see an elaboration of his ideas from MoMa in New York.

The National Technical Library will be ceremonially opened on September 9(th), 2009. Library users will have access to over 1,200 seats in study areas and 300 seats in relaxation areas. It is estimated that the library stores about 1.2 million volumes. There will also be an exhibition hall, a conference hall with 200 seats, a cafe with 150 seats, WiFi internet access throughout the building, parking for 300 cars and stands for 200 bicycles. It is expected that the new library will draw up to 900,000 visitors every year. 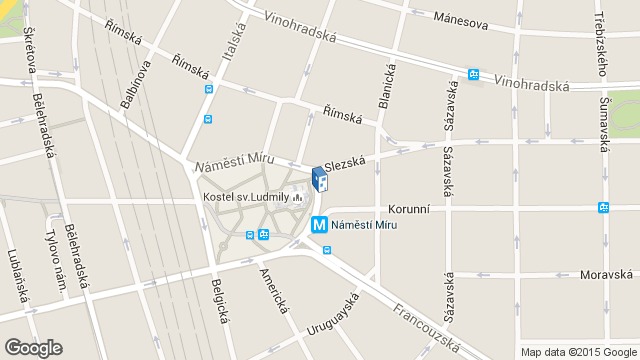 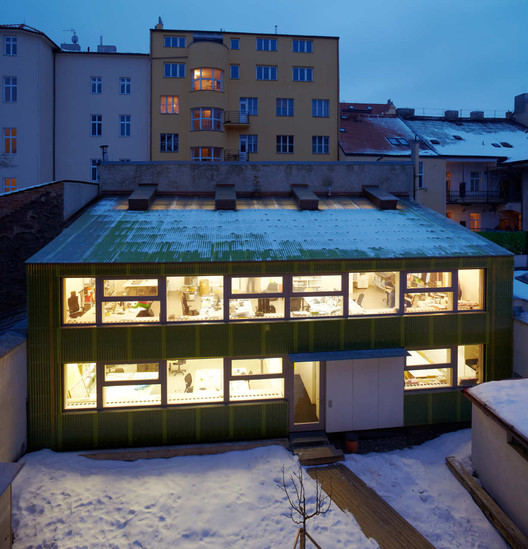 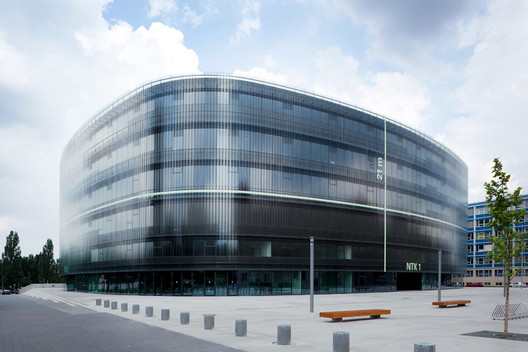