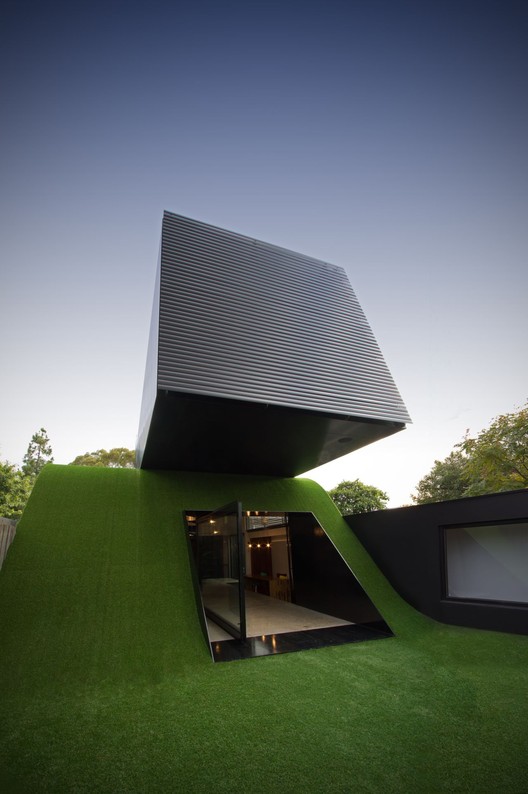 Text description provided by the architects. Design is complex. There is little that is more complex to design than a home, however fundamental issues offer an architect a starting point; where is the sun? How do we capture it in winter, how do we exclude it in summer?

The thin allotments that dominate Melbourne's northern suburbs often provide indomitable constraints to solar access and therefore require the production of unorthodox ideas to overcome these constraints and convert them into opportunities.

The site faces north therefore relegating the backyard, the family’s primary outdoor space, to shadow throughout the year. In the 90s a two storey extension was added reducing solar access even further while creating deep dark space within the house. A family of five wished to create a long-term home, which could meet the requirements of three small children and their slow transformation into young adults over the years.

Rather than repeating past mistakes and extending from the rear in a new configuration, the proposal was to build a new structure on the rear boundary, the southern edge of the block, upon the footprint of what had been, until now, the back yard. The new structure faces the sun employing passive solar gain. Saturating itself with sunlight. The new structure faces the original house. The backyard is now the centre of the house activated by the built form around it. The old house is converted into "the kids’ house". The old house is as it once was. The rear of the simple masonry structure, though spatially connected, is not reoriented, a face is deliberately not applied. It is left honest and robust. With a restrained piece of “street art” to be applied.

Thomson street no longer provides the main entry to the home. Family now enters via the lane from Stanley Street. The original house, now private dormitory spaces, no longer has a typical relationship to the Thomson Street’s “front” door. The original house, as with most narrow blocks throughout Melbourne, demanded that visitors walked a long corridor past bedrooms to the living area. Stolen quick glances into dark private spaces always occurred along the journey. At the Hill House the entry is reorientated. The kitchen, the nerve centre, the hub of the house, is the new greeting point. Beyond is the park. Adjacent is the living space, the yard and the "kids’ house" beyond.

Following the decision to build at the rear of the block a ubiquitous modern box was first imagined. Soon it seemed necessary to pursue the opportunity to activate this new, once shaded, now sunny facade. A seat along the new northern facade? Perhaps a series of steps like the Scalinata della Trinità dei Monti? But how does one lounge in the sun on steps. Perhaps a slope instead .... And the hill house evolved/emerged.

Andrew is from Tasmania, a place dominated by its landscape. Built form is secondary and subservient to landscape. Melbourne is predominantly flat. Could this be why Melbourne’s architecture is adventurous? There is no landscape to confine therefore building is free to become landscape. Hill House is a response to this possibility. Melbourne is flat. If one is to explore the possibility of cantilevering off a cliff (a desire of many architects) one is forced to manufacture that landscape. A monolithic form is unsheathed from the hill and placed atop. A celebration of the synthetic, the manufactured. A simulacrum of both an undulating landscape and the pure architectural form. Strategically the architectural celebration of the pure cantilevered form acts pragmatically as the passive solar eave to the outdoor space below, cutting out summer sun, while letting winter sun flood in. It works even better than we thought it would.

Rescode is subverted and used as the catalyst rather than the compromise. Building in the rear of the yard requires a protected circulation path which, by necessity, generates a wall along the entire boundary. The code dictates that a boundary cannot be completely walled, however it can be completely fenced. A 2m high fence was created, but unlike most houses the hill house has a one metre wide fence; a corridor lowered into the site to achieve head height. This in turn creates a lowered dining area. One rises into the living space. The change in floor level creates a bench seat for the Maynard designed ZERO WASTE TABLE.

Overlooking generates many awkward responses. Windows must be above head height rather than looking at the neighbours. The Hill House uses this to its advantage. The benefit of the structure being in the backyard is that it borrows landscaping from its neighbours’ gardens. The high windows about the entertainment cabinetry and the dining area are enveloped in trees. Internally one gets the sense that Hill House is enveloped by bush rather than part of the suburban mix.

Steel not only provides a solution for the architectural form explored, it is also the primary celebrated material within the small strategic palette applied. The black monolith is a continuous, full height steel truss. The monolith cantilevers more than it is grounded in the hill. The central truss is celebrated in the living space. The entire load of the second storey travels down the deliberately fragile tri-post in the dining area. The concealed steel posts beside the kitchen counter intuitively tie down the monolith, stopping it from falling forward, rather than taking downward load. The roofing is white colourbond, used strategically to reduce thermal load. The kitchen benches are steel, used deliberately as it is both robust and slowly revealing a beautiful patina of age. The hood around the hill opening is slender, strong steel plate clinically inserted. The door here pivots, seemingly defying gravity. The stair, the doors and the windows are all steel. From the large and robust to the fine and detailed, steel has been celebrated as both a structural solution and an aesthetic.

Hill House is far more sustainable than first appearance suggests. It is a deliberate attempt to avoid any aestheticizing of the project’s sustainable credentials. The whole strategy was to get the house in the backyard to face the sun and to get passive solar performing optimally. All windows are double glazed and LowE coated. Low VOC plywood and farmed class one spotted gum line the internal walls of the building. The yard is water efficient - the use of synthetic grass with strategically placed garden patches create dense areas of planting, resulting in very little demand for water.

Long strips of windows to the East and West have been equipped with operable louvres. The north-facing facade consists of an entire wall of the same mechanically-operated louvres, providing the option of controlling cross-winds and sunlight. The grass on the hill envelops the ground floor in an additional layer of insulation; it is a thermal roof blanket, installed to supplement the existing insulation of the building structure beneath whilst also protecting the roof membrane. A white roof is used throughout to increase solar reflectance, sustainably reducing heat gain within the house.