It turns out the David Wright House isn't the only unusual (and controversial) Frank Lloyd Wright-designed gem on the market.

Petre Island (sometimes called Petra Island) is an 11-acre, heart-shaped island 47 miles from Manhattan. While Wright hand-picked the site himself in 1949, and drew up plans for a 5,000 square foot "dream house" the following year, budget concerns forced him to scale down his vision, resulting in the construction of a smaller guest cottage.

Fast-forward 53 years later, and the island's new owner, John Massaro, decided to make those long-sitting plans reality; he hired architect and Wright scholar Thomas Heinz, who used ArchiCAD to model aspects of Wright's design that weren't obvious from the original renderings and updated the house with some modern amenities.

While the Frank Lloyd Wright Foundation refuses to accept the house as authentic (they even tried to sue Massaro for claiming so), that hasn't stopped AHALife, the web site featuring the island for sale, from proudly selling the "spectacular Frank Lloyd Wright-designed house" for $19,900,000 USD.

More images and info on this Wright-designed island, after the break... 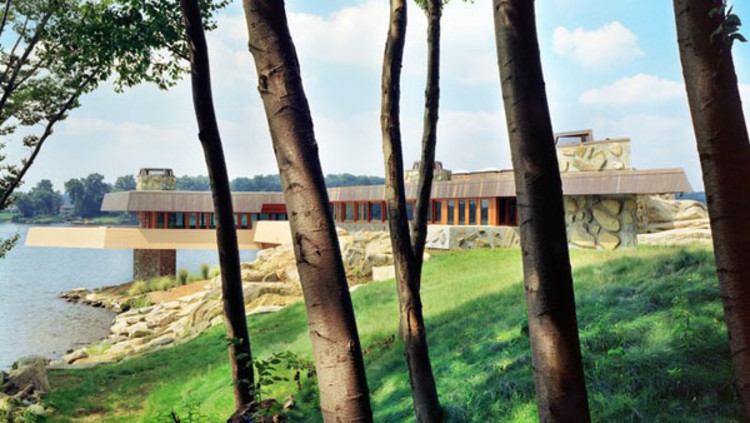 The picturesque island, home to acres of 200-year old beech trees, sits in the middle of Lake Mahopac in New York's Putnam County - about an hour and a half's drive from Manhattan, but only a 15 minute helicopter ride (the residence, of course, has its own helipad on the roof).

Typical "Wright" details include an enormous cantilever deck (the largest ever designed by Wright), wood-burning fireplaces, custom-built woodwork (whittled from African Mahogany), and the considerable integration of nature. In fact, the house was built around the island's natural rock formations: a 12-foot-high, 60-foot-long rock forms the exterior of the house's entry and a long interior wall, while a smaller "tail rock" encloses the bathroom and kitchen.

Story via Architizer , AHALife , and Wikipedia