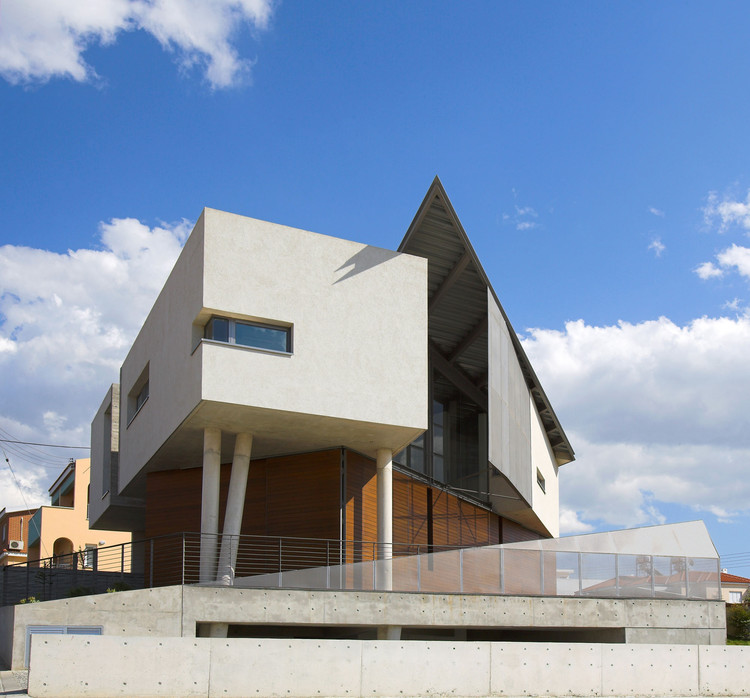 Text description provided by the architects. The site is located in a densely populated suburban area of Nicosia. The site of about 520 s.m. had a natural slopeof about three meters from South-East to North-West with the bordering road running parallel to the slope of the land. To avoid additional construction costs associated with large retaining walls it was decided that the majority of the construction would be confined on a triangular plateau on the higher level of the plot. The interior and exterior spaces on the ground floor were organized on two levels with a difference in elevation of approximately two feet following the natural slope of the land.

The ground floor is organizedby two orthogonal ‘boxes’ at an angle to each other that meet at one. The first ‘box’ relates to the more public functions of the house and opens up to the outdoor spaces while the other includes the food preparation area and access to the upper floor. A stepped ramp leadsthe way to the main entry which is at a higher level from the slopped street. The entrance is programmatically located between the public areas of the residence and the more private, arriving at the juncture of the two ‘boxes’. A third ‘box’ which sits on top of the first two and is oriented parallel to the street encloses the sleeping areas for the three member family, a couple and their three year old son. The entrance path is allowed to formally penetrate this upper box and create openings that visually connect the upper level spaces with the street.

A design challenge was the regulation of western sunlight, especially during the long dry and hot summers without obstructing the western mountain views. To achieve that a metal canopy overhangs the interior spaces offering shade until late afternoon. Furthermore, a vertical shade comprised of perforated metal sheets offers privacy and sun protection while allowing views to the outside.

In the summer the closed sliding wooden panels on the ground floor in combination with the open parallel sliding glass doors on the inside can keep the summer sun out but allow for natural ventilation to occur utilizing the predominantly western winds of the area. During the winter months the wooden panels can be opened with the glass sliding doors remaining closed allowing for enough heat gain and therefore minimizing the need for the heating system to operate during daylight hours. Also all bedrooms and baths benefit from the eastern morning sun during the winter days.

Cross ventilation during the summer months is highly effective on the ground floor with all sides opening to the outside, and the second floor together with the overhanging roof and vertical shading device acting as a large ‘umbrella’. Furthermore all rooms have a minimum of two openings allowing for natural ventilation and minimizing the need for air-conditioning. Also the connection between ground floor and first floor allows for hot air to escape from clear story windows strategically located to effectively utilize predominant westerly winds. A small pool of water facing west and located outside the sliding wooden panels can allow for evaporative cooling to occur.