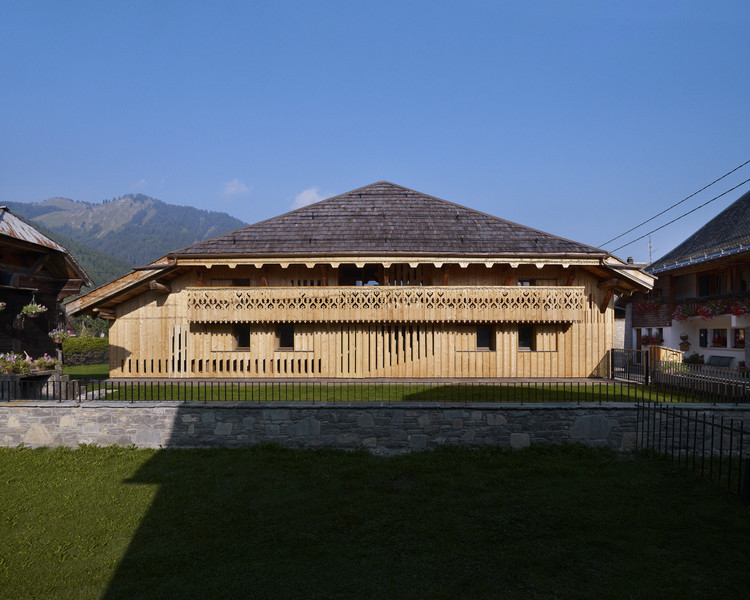 Text description provided by the architects. The project consists in a conversion of an ancient farmhouse into a luxury rental villa, revisiting traditional techniques. This former farmhouse is located in the historic district of JK, in Morzine. Built in 1826, it was singled out by the municipality as a landmark for traditional architecture.

Drawing on the context: Inside/ outside fitting

A uniform cladding wraps the whole farm. One of the challenges of the project was to preserve its appearance, while filtering light into the heart of the building. The traditional technique of decorative cut-outs within the wood strips was used to perform specific perforations within the planks. The design of this simple and contemporary pattern is consistent with the equipment and techniques used by the local carpenter for cutting spruce slats. These cut-outs recall the disjointed battens of the traditional barn, used for drying hay.

Today, these slits bring light inside the building. The glazed elements of the project, which are flush with the inside of the façade, are partially hidden by the cover strips. As they are not visible from outside they do not interfere with the uniformity of the cladding.

Throughout the year, the surrounding roofs and buildings cast their shadows on the façades. The pattern within the cladding is designed to respond to the path described by these shadows: the areas receiving a greater amount of sun are all the more open and provide a certain legibility of the continuity between the common spaces of the house.

This concept of interlocking inside/outside, evokes a lifestyle in harmony with its surroundings and leads to the project being named the "solar house": a house exposed on its four façades to the path of the sun, perceived as a sundial.

The idea is to move through this house between four "blocks" steady as rocks, located at each corner of the building.  Each independent unit forms a suite with sleeping area and amenities.

Between these four blocks, the remaining space is occupied by a succession of stacked floors at different levels in the framework. This continuum of generous space welcomes the activities shared by the inhabitants: cooking, dining, watching a film, conversing in the living room, warming up around the fire…

These four blocks mark the house as the summits punctuate the valley. In Haute Savoie, one instinctively relates the farms to the mountains. Again, this symbolic association is translated in each block as it is identified in its facing mountainous terrain, just as the framework can be interpreted as a forest, whose various topographical lines are recalled within the different floor levels.

Revealing the structure:Nested scales or "the complex of the snail"

The charm of the original farm resides in the existing structure. Conserving its overall appearance was of one of the project's key challenges, which motivated its restoration: It was fully recovered and the original plastering preserved after brushing and trimming.

In order to clear the room of the nave while meeting the rental house needs, utility functions were closely integrated. A strong contrast results from the scales of the cosy bedrooms, bathrooms and sleeping alcoves, next to the open central meeting space. The complexity of these nested spaces is combined with a similar research in terms of details and materials. 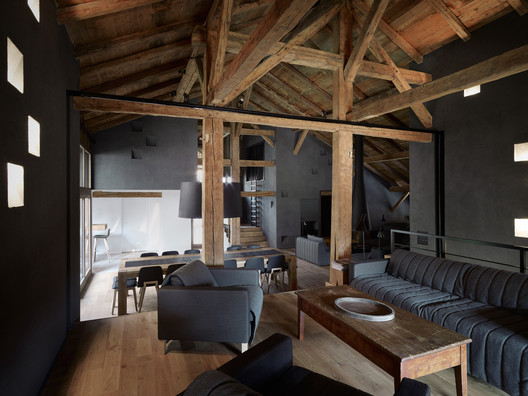