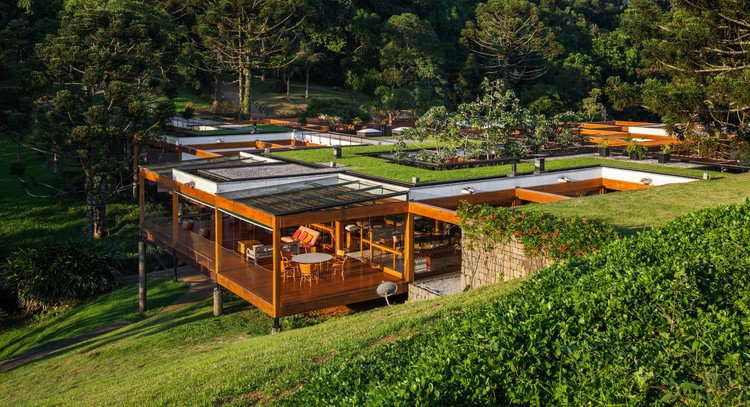 Text description provided by the architects. In an area of 53.24 hectares, only 65,000 square meters are not covered by the lush native intact forest that is permanently protected. In this area of accidented topography, where large stones are surrounded by Araucaria trees, a small valley was chosen, protected from the winds and close to the forest. This is where the natural walking paths cross: the site where people who arrive at the plot of land go to, access to the paths leading to the heart of the forest and to the top of the hill where one sees an impressive view.

Three main issues have guided the project conception: the demand for a single-story house, the wish to establish a direct relationship with the land and nature and also the need to provide privacy to the members of the family, with the main area located in one single building. Another important factor that we took into consideration was the region's high humidity levels, which led us to suggest a house above the ground.

A structural grid in wood, with 5.5x5.5x3m modules, suspended above this nucleus for accesses, connects the existing paths and creates new ones. Thus, one may cross the bridge structure in three different ways: from above (the roof garden, which is a projection of the plot), from beneath (crossing a garden with water mirror and natural stones) and going via the middle of the house (crossing an external covered area). This grid has modules, some of which are taken up by closed environments; other ones are totally empty, allowing that the trees from the garden below cross the structure.

The program in the grid is made up of a nucleus, with washing area, social area, guest room and the owner's apartment, and three isolate modules, with two bedrooms each, for the children. Among these, the empty modules highlight the structural continuity and enhance the empty spaces where the garden can be seen. This empty and closed spaces game provides a fragmented organization of the program, protecting the privacy of the users and, at the same time, enabling an understanding of the building set as a cohesive unit.

Suspended above the valley and merging into the hills, the house becomes the land and the land becomes the house, creating a new landscape. The built-up empty spaces, simultaneously inside and outside, allow us to see, under the grid, stones and garden the native forest, the surrounding trees and the supporting stones, where the house is immersed.

The wooden grid, supported by a set of concrete pillars, is set on the hill on two sides, as if sprouting from the ground. At this point of contact, the land is engraved by several walls made up of stones drawn from the same area. To avoid an excessive number of pillars in the 2000-square-meter structure projection, and to provide wider open views of the garden below, large trussed beams in cor-ten steel are placed at each two modules, each one of them 11 meters long. These beams, together with the landscaping, make up an important part of this work.

On the top of the highest hill, from where one has the most generous view of the mountainous horizon, lies the leisure pavilion, divided up in two blocks, with the same modulation of the main residence. The pavilion is supported by metallic beams in cor-ten steel, in a wing shape, enabling 100% of the balances in the free span, on the hills' borders. The leisure pavilion and the residence block, with the same structural grid showing antagonistic situations of land occupation - whether in the valley or on the hill, the module establishes a clear dialog with the topography. Another 3 service pavilions with garage, housekeeper's house, accommodations for the maids, dressing rooms, warehouses, etc. are pavilion-like constructions, with the same 5.5 X 5.5 meter module, albeit in a stone structure. Large parallel panels made out of stone anchored on the ground support the slabs. While the wooden constructions are light and ethereal, these blocks are evidence of their different function through the clear support of the large panels on the ground.

Three levels of landscape intervention have been defined. The idea is to rebuild the margins of the forest and create a transition between the open field and the closed forest by using native species, compatible with the region. At the same time, in the remainder of the open area, the park is taken up by paths with resting areas in the areas where the best views can be observed. Finally, at the sites close to the buildings there is a garden prior to the architecture work. At the top floor, which is a continuation of the plot, there is a linear water mirror that avoids the use of body protector and relates to the large water mirror located in the lower garden, around which the largest stone at the site.