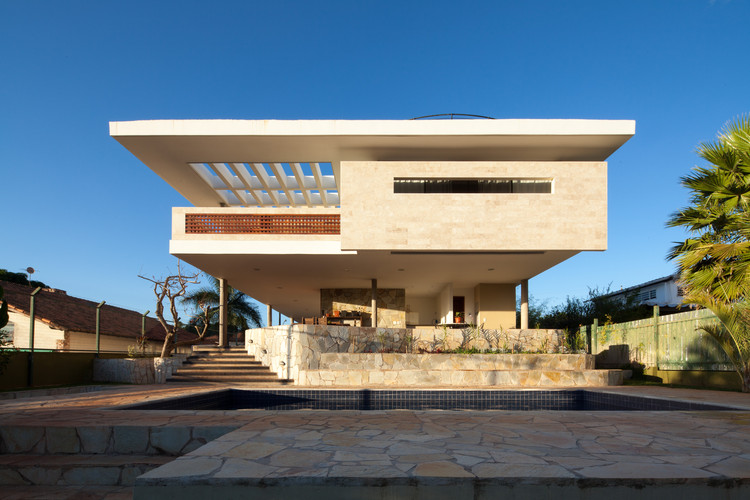 Text description provided by the architects. The owner of this house, at the South Lake residential district in Brasilia, had grown up on that same street. The window of his bedroom was opened to the view of the Paranoá Lake towards northwest, with the monumental zone of Brasília right at the opposite bank. He had witnessed the evolution of that landscape, and intended to keep living together with it. The house was almost fully elevated on piloti, on the edge of the height allowed by urban regulations, opening the view above the neighbors’ roofs.

Since they were still a young couple without kids, the basic programme (living-room, office, bedrooms, kitchen, laundry) was distributed only on the upper level, shortening daily circulation – especially when kids are still small. Internal rooms were articulated in a way to allow the view of the landscape, now the main leitmotif of the design, complemented by a panoramic deck freely set over the roof.

The ground level was distributed with small embankments in different levels, in a way to avoid an excessive ceiling height. The garage is on an intermediate level, along with a service area equipped with a freight elevator and an employee bedroom, in a way that it hides the vehicles when seen from the veranda above. A small two-bedroom flat was planned for future occupation of the pilotis, when kids would demand more independence – a plan executed in advance by the owner during the construction, so it would bring more autonomy to the leisure area and allowing the family to have gests.

The structural system, ordered in relatively conventional spams of 5,4m and 6m commanded the design with a strict 60cm modulation to which all the elements and components are adjusted. Flat-beams and waffle slabs made possible a flat-ceiling formal solution, even with the large cantilevers that allow the house to lean towards the landscape.

The living-room, the office, and the master-bedroom – this one with a small terrace – are directly open to the view, as it is indirectly the kitchen – connected to the living-room by sliding panels. The integration between these rooms is also made by a set of continuous cabinets, a stone countertop and horizontal windows – opened to the front street-view.

In order to protect the internal rooms from the inclemency of the tropical sun on the northwest façade – the one open to the view – it were used one-meter eaves and a thick sill cladded with marble, ensuring protection during the hottest times of the day. The solution for the strip window was a set of adjustable perforated sun blinds, concealed in an external box completely independent from the glass, and separated from the ceiling slab enough to allow the entrance of the tenuous sunset light – without completely blocking the view of the sky. The 40cm-hight strip along the ceiling slab surrounds the whole elevated volume, bringing to the interior spaces the several nuances of sunlight along the day, making more palpable the passage of time. The recording of time, in another duration, was also determinant on the selection of patinable cladding for the contention walls on the ground level – rough limestone – and for the upper façade – a kind of Brazilian travertine cut in 60cmX15cm plates.

Following the same classic logic, so to say, a free-form Portuguese stone flooring integrates vegetation, internal and external areas on the ground level, while the upper level is floored with simple porcelain, set accordingly to the modulation of the house. 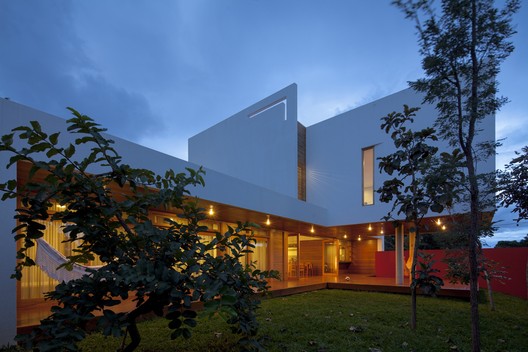