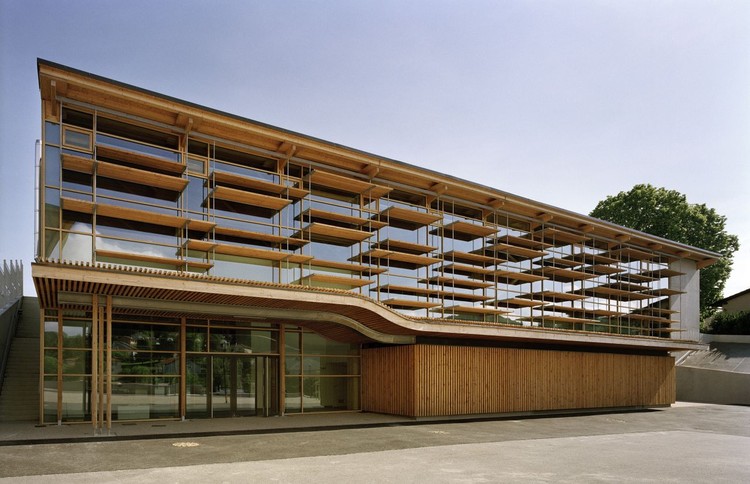 “Projects grow out of their site” is the credo – or even a doxa – of Christian Charignon, founder of the Tekhnê architectural firm. This is proven by the gymnasium in Saint Martin en Haut in the Lyon area – an imposing box, 45 m long by 25 m wide and 10 m high. The scheme meets the daring challenge of integrating this facility very discreetly into a small rural town in the Monts du Lyonnais hills: how could such a giant be merged into its site? Viewed from above, set into the natural slope, it disappears under its plant-covered roof, leaving views open onto the extensive hill landscape. When viewed from below, one single elevation is visible, entirely in wood and glass, without any monumentality, facing onto the secondary school forecourt. The interior has the same feeling of clarity and comfort. Bathed in abundant filtered daylight, the gymnasium sports hall is immediately striking, with its remarkable roof structure formed by an astonishing timber framework. This architectural treatment introduces an organic dimension into the sports hall’s simple geometry. The first objective was to find the right place for a building of this scale and to make it coexist harmoniously with the surrounding urban fabric of low-rise housing. The competition brief requested the facility to be placed at the top of the site, which is around 7 m higher than the bottom. The designers very rapidly imagined the terrible impact on the landscape of a large mass placed at the crest above the village, and they decided to go against this request by placing the gymnasium at the bottom part of the site. Built into the slope, located at the level where large numbers of schoolchildren circulate, the gymnasium structures a square that it forms with the neighbouring secondary school.

To avoid any damage or accident in this site that is liable to seepage and waterlogging, the ground is retained by a nailed soil wall, uphill of the reinforced concrete walls that enclose the gymnasium on the north, east and west. A gap is left between the building’s walls and the nailed soil wall. In this “in-between space”, which acts as a large air-ground heat exchanger, air is taken in bulk at a virtually constant temperature of 12 to 14°C, well above winter averages, as Saint Martin is at an altitude of 750 m. The span of 30 m above the sports hall and its tiered bleacher seating had to be cleared with as low a height as possible. This challenge was met successfully by eleven inverted trusses that support the planted roof, of which the loads are conveyed down to the Kerto® columns that support the south elevation. The spectacular girdering creates the whole spirit of the scheme. It has all the qualities of a high-performance superstructure, yet it remains admirably light. The crisscross girder trusses, which are delivered in two parts, consist of tensioned and compressed Kerto® chord members and latticework of vertical and oblique solid timber bars. The very airy design of the chord members allows abundant light through, particularly on the north. The “in-between space”, which is located between a nailed soil retaining wall and a concrete box, is the impressive “belly” of the scheme. Spectacular structural elements being installed during construction.

With the other three of the four elevations underground, the south elevation is of special importance. From the viewpoint of internal use, it is a matter of reconciling sports activities and the provision of daylight. Fortunately, the glazed elevation on the south is where the compromise between visual comfort and thermal comfort is the simplest to find. The strip of ancillary and service areas at the entrance, containing changing rooms and bleacher seating, forms an opaque mass on the ground floor that avoids direct lighting, which causes glare, and it minimises views of the outside. Above, fixed sun-break “shelves” (consisting of metal frames and horizontal wood louvers) regulate sunlight according to the seasons, letting in the sunshine in winter. Daylightiing is further regulated by internal screen fabric blinds according to sports activities, since some sports such as table tennis cannot tolerate any contrast. In the upthrust of the site on the north, a 1.60 m strip of windows balances the luminance levels, limiting the sensation of opaque surface and reducing the shadows and contrasts in the gymnasium. From the external viewpoint, from the redesigned square, there are several superimposed scales of perception. The protruding part of the changing rooms introduces the scale of the pedestrian. The entrance is indicated by an undulation in the long regular canopy. Its vertical wood strips contrast with the smooth wood curtain wall that encloses the gymnasium, which is on the scale of the small square and the secondary school. Its regular vertical rhythm, following the pattern of the roof structure grid, is disturbed by the random play of the horizontal solar protection elements. Changing, vibrating/modulating shadows continually modify the perception of the glass wall. The side stairway on the west completes the building’s integration into its environment, indicating that a route leads from here to the top of the site, where the “fifth facade”, i.e., the planted roof, reconstitutes the natural ground.

Spatial organisation is simple. A large glazed entrance lobby forms a box within the box, from which all areas are reached. The sports hall (44 m x 22 m), of regional ranking is used by schoolchildren and sports clubs. Tucked under the 100-place reinforced concrete tiered seating, the changing rooms and sanitary accommodation have daylighting that makes them inviting. Three sports equipment storage areas, located on the side built into the hill, open directly onto the sports hall. The wood-fired boiler-house and its wood pellets storage areas are concealed in the west embankment; they are directly accessible from the square in order to facilitate the operation, servicing and maintenance of the heating installations.

Simplicity, which is a prior condition for making the best use of energy, is exemplified in the decision to insert a compact, highly-insulated building into the hillside, under a planted roof. The south elevation makes use of passive solar energy inputs, while benefiting from the constant temperature of the scheme’s “belly” that acts as an air-ground heat exchanger, for air changes. Summer thermal comfort is provided by solar protection of the south elevation and by natural cross-ventilation: motor-operated glazed openers, placed opposite each other and at a height on the north and south sides of the gymnasium, are slaved to the internal temperature. Remaining heating needs are covered by a low-temperature heated floor, supplied by a wood pellet boiler. Daylighting, which, as we have seen, is very generous, is complemented by graduated artificial lighting to adapt to the various uses and occupations of the large sports hall as required, with minimum light or for school use, sports events or competitions. The wood used for the structure (roof structure and columns), on the elevations (curtain walls and battened cladding) and on the internal skin creates a peaceful, serene atmosphere in the large sports hall. The lining of horizontal slats – which are close-jointed up to a height of 3 m, and are then gradually spaced apart – protects an absorbent felt that provides acoustic comfort. 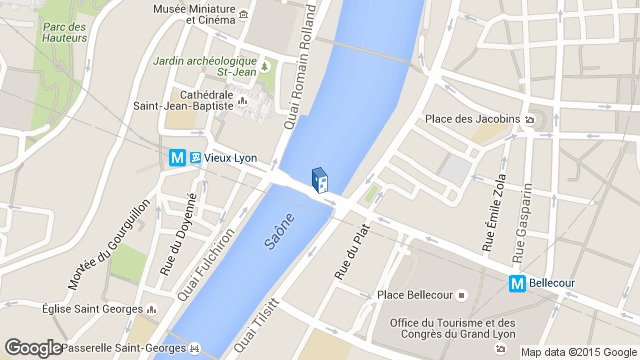 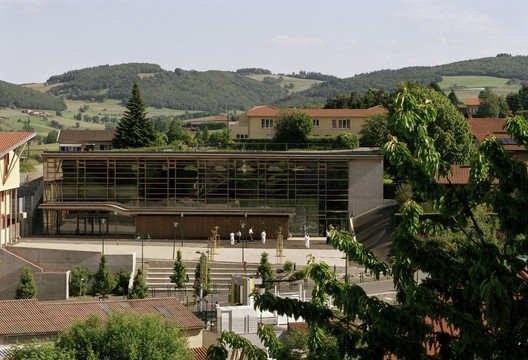 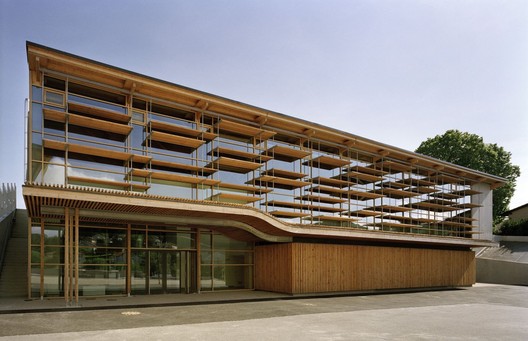