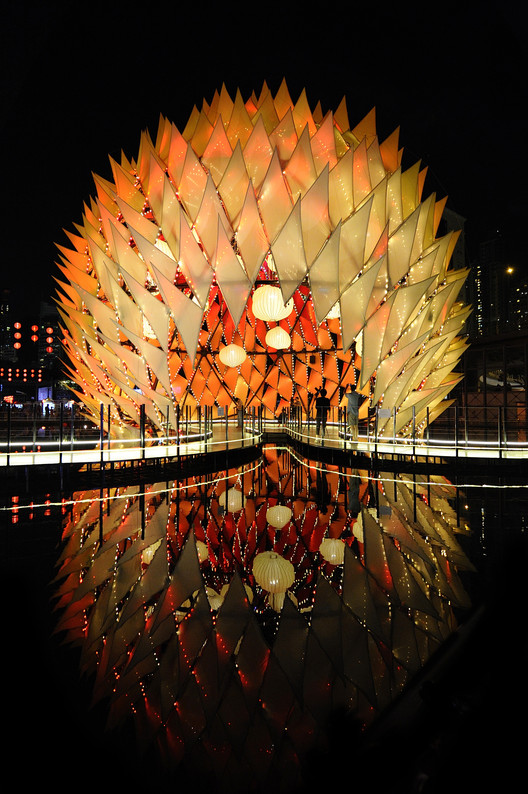 Text description provided by the architects. The Golden Moon is a temporary architectural structure that explores how Hong Kong’s unique building traditions and craftsmanship can be combined with contemporary design techniques in the creation of a highly expressive and captivating public event space. It is the 2012 Gold Award winning entry for the Lantern Wonderland design competition organised by the Hong Kong Tourism Board for the Mid-Autumn Festival and was on display for 6 days in Hong Kong’s Victoria Park.

The Golden Moon revisits the concept of a Chinese lantern and makes a direct link to the legend of Chang’e, the Moon Goddess of Immortality – two elements strongly associated with the Mid-Autumn Festival. According to the romantic story Chang’e lives on the moon, away from her husband Houyi who lives on earth. The couple can only meet on the night of the Mid-Autumn Festival when the moon is at its fullest and most beautiful. To symbolise the passionate love burning between the reunited couple that day, the 6-storey-high, spherical moon lantern is clad with abstracted flames in fiery colours and patterns. The lantern is placed in a reflection pool and is made large enough for up to 150 people to enter and be fully immersed in the sound and light experience.

Traditional materials for making lanterns, such as translucent fabric, metal wire and bamboo, have been translated to a large scale. A light-weight steel geodesic dome forms the pavilion’s primary structure and is the basis for a computer-generated grid wrapped around it. This grid is materialised through a secondary structure from bamboo. For this, Hong Kong’s traditional bamboo scaffolding techniques were used – a high-speed, instinctive way of building scaffoldings for e.g. the city’s many skyscrapers. This highly intuitive and imprecise craft was merged with exact digital design technology to accurately install and bend the bamboo sticks into a grid wrapping the steel dome. This grid was then clad with stretch fabric flames, all lit up by animated LED lights.

The bamboo and flames follow a pattern based on an algorithm for sphere panellisation that produces purity and repetition around the equator and imperfection and approximation at the poles. This gradual change, combined with the swooping and energetic curves that define the geometry, creates a very dynamic space that draws spectator’s view up towards the tip. By putting the axis of this cladding grid not vertical but under an angle, the dome gets an asymmetric directionality. This motion is reinforced by the entrance which is placed along this tilted axis to draw people into the sphere and where they get swept away along the grid’s tangents and vectors. The colouration of the pavilion amplifies this effect of submergence in a light wonderland. On top of the black painted steel structure, which forms a neutral base, eight different, saturated colours of stretch fabric are used for the flames. The colours gradually range from ivory and yellow to intense orange, red and deep bordeaux. The brightest colours are used at the tilted base whereas the darkest colours are used at the pole where they, together with the more scrambled geometry, make the pattern disintegrate into the black night sky.

The Golden Moon builds up on research into “building simplexity”, the building of complex geometry and space using the simplest of means. In this research we strategically combine digital design techniques, such as computer programming or CNC fabrication, with traditional crafts and basic materials. In this project procedural modelling techniques were used to control the production of the unique geometry: a sphere that is wrapped with a diagrid according to a Fibonacci sequence that produces order along the equator and randomness at the poles. Code was used for the production of simple drawings that would allow the labour force to mark up intersections between the steel structure and bamboo easily. These drawings took traditional bamboo scaffolding construction detailing into consideration in the definition of installation tolerances. Optimisation scripts were finally used to reduce the amount of unique stretch-fabric “flames” from 470 different units to 10 different types that could stretch and adapt to the various conditions in which they were applied. All details and construction procedures were devised to allow for a high-speed production as only 11 days of onsite construction were available for this 6-storey-high pavilion. To bring the project to a successful end within the limited time available, a very close conversation with the craftsmen was required from the beginning. Preconceptions of building methods and familiar construction techniques had to be abandoned by all parties as both the digital and the material world demanded a new design and building set-up to be devised. This project shows an alternative way for digital design to be materialised into a more humane environment with real-world conditions like limited time frames, low budgets, minimal precision but human flexibility, creativity and ad-hoc inventiveness.

The Golden Moon was opened to the public in the evening and displayed a sound and light spectacle visible both from inside and outside the pavilion. Around 150 people could walk through the lantern simultaneously. The light show consisted of a main, fully pre-choreographed show that plays for 3 minutes every 15 minutes and was alternated with a 12 min intermezzo. For the 3 minute show large scale patterns had been designed specifically to be comprehensive from a distance from where the dome can be seen as an isolated object. Inside the dome these patterns became more abstract and submerged people into an alternative world of sound, light and colour creates. The 12 minute intermezzo was developed using non-linear, non-repeating colour patterns from “agents” or “boids” that generate flocking patterns similar to those found in nature in schools of fish or flocks of birds. This was done to give the pavilion the impression of being alive and create variety of the user experience throughout the evening.

The Golden Moon was built in only 11 days and shows how, through a combination of state-of-the-art digital design technology and traditional hand craftsmanship, complex geometry can be built at high speed and low cost with the simplest of means. It rethinks the premise of digital design by anchoring the paradigm in a strong materiality. With nearly 500,000 visitors during its 6-day lifespan, the pavilion used its dynamic space, structure, colour, texture and light to trigger a sensuous response from visitors of 2012’s Mid-Autumn Festival. 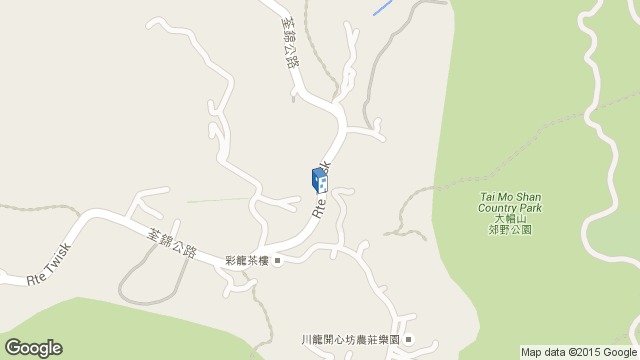