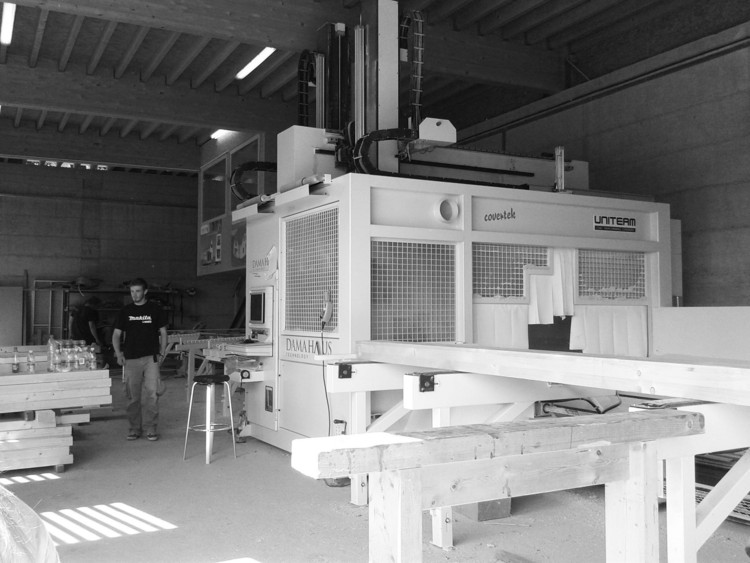 This temporary exhibition pavilion was built during the MEDS, Meeting of Design Students, in Ljubljana during August 2012. It was a collaboration by an interdisciplinary team of 15 students and young graduates from the MEDS community and 2 representatives of project sponsor DamaHaus, a Slovenian construction firm. The team was led by Irish tutor Kieran Donnellan and the name of the pavilion relates to aspects of its spatial configuration and use.

The pavilion is a non-’white wall’ exhibition space whose character is meant to inspire exhibits of both existing and new work, relating to the concept that shaped the pavilion. The concept was inspired by the history of the Ljubljanica river, and in particular the change over time in the ways that locals interact with it.

Located in a narrow riverside park, the curved and pointed form of the wooden pavilion evoke the atmosphere of a boat that has been placed, seemingly at first, loosely among a line of trees beside a sluice gate built by Jose Plecnik. Upon further investigation, the subtleties of the orientation and the nature of the eccentric geometry become obvious. Acknowledging the hierarchy in the directions of pedestrian movement on the site, the pavilion sits close to the waters edge while reaching out through the tree-line towards the path. As it breaks the tree-line, the pavilion dissolves, encouraging movement towards the entrance of the pavilion, while also framing views of the sluice gate. The covered entryway is an exaggerated portico that addresses Plecnik’s monument. This creates a strong tension in a way that seems at once both formal and informal.

The sliding door of the pavilion has no handle. Fluted carving, a reference to the features of the monument, offers grip over the entire surface of the door. Sliding back, it reveals the curved surfaces of the interior. The wooden floor of the entry lobby ends upon striking the elliptical curve of the interior exhibition space, where the most intriguing aspect of the concept is discovered – the floor of the exhibition space is a pool of water. This is a reference to the way in which the Ljubljanica river was experienced by locals in the past, when the river lapped right onto some of the streets and the use of small boats was part of daily life. That moment of stepping from dry land onto a water based vessel is imitated in the Water Temple, when a visitor takes their first tentative step onto the sliced tree-trunks which are placed, unfixed, throughout the pool. Movement in the exhibition space is carefully balanced and considered.

The elliptical shape of the interior was an experiment with the amplification of sound. An ellipse has two focal points, and any sound that occurs in the interior within certain directions will be loudest at those points. The effect is most obvious upon arrival at the first focal point inside the entrance when the door is left open. At this point, the sound of the sluice gate is louder than at any position on the journey inside, and seems to surround the visitor.

Exhibitors have the freedom to decide where the steps should be placed, or to use alternatives for their own exhibitions. Work can be mounted on steel supports fixed to the primary vertical structural members, and placed in or on the pool. The pavilion will remain in its current location for between 6 months to a year. A series of exhibitors will be allowed to use the pavilion in turn. Anybody interested in exhibiting in the Water Temple can make inquiries to MEDS.

The pavilion was built using CNC technology and wood bending techniques. DamaHaus used their CNC machine to manufacture the primary structural components, all made from pine. This included cutting a mixture of traditional blind tenon and exposed dovetail joints. The curved walls were made on-site by cold-bending and glueing 2 thin layers of wood together following immersion in the Ljubljanica river.

The twelveplus team was composed of 17 people from a variety of different countries and disciplines. The members were: Agata Madurowicz; Agata Motyka; Andreas Von Knobloch; Anze Jagodic; Catriona Kinghorn; Florence Declaveillere; Irem Karadeniz; Kieran Donnellan; Luca Giacobazzi; Maria Prodromou; Marta Vrankar; Martina Zaman; Mitja Skerjanc; Paul O’ Brien; Sarah Mogensen; Valerio Bianchi; Zsolt Sarkadi. The team name is a reference to the fact that while the principle design was developed by a core group of 12 people, there were contributions from many others including the MEDS organisers and DamaHaus team. This year’s MEDS was organised by Can Baysal, Katarina Mravlja and Zana Kopitar. 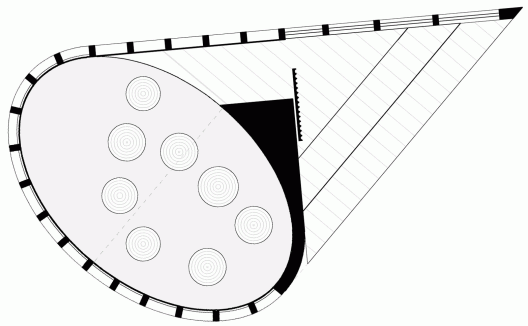