Save
Rare images of Le Corbusier by Willy Rizzo, in color
Share
Or
Copy

It’s hard to imagine Le Corbusier – the bespectacled legend of 20th century Modernism, known for his ultra-clean aesthetics – as living in the everyday, messy world that we all inhabit. Which is why the Fondation le Corbusier‘s decision to display rare color photographs of Le Corbusier is such a treat for us all.

The photographs were taken for the magazine Paris Match in 1953 by Willy Rizzo, a fashion photographer better known for his shots of 1950s stars and starlets. The images depict the then 66-year-old Corbusier in various spots about Paris: the Musée National d’Art Moderne, his apartment, in front of a blackboard (sporting a sketch of Unité d’Habitation).

In her Fast Company article, Kelsey Campbell-Dollaghan explains that these images give us a glimpse of the man behind the myth: “Even the way we talk about him now, as Le Corbusier, refers to an idea as much as a person. Captured 12 years before he drowned in the Mediterranean at his beloved summer home, Rizzo’s photographs give us a glimpse of the pre-sainted man–aka Charles-Édouard Jeanneret.”

The photographs will be on display at the exhibit “Le Corbusier by Willy Rizzo” at Le Corbusier’s Maison La Roche, in Paris, until December 15th.

Check out more images of Le Corbusier, after the break…

And, as we’re used to seeing him, in good old-fashioned black and white… 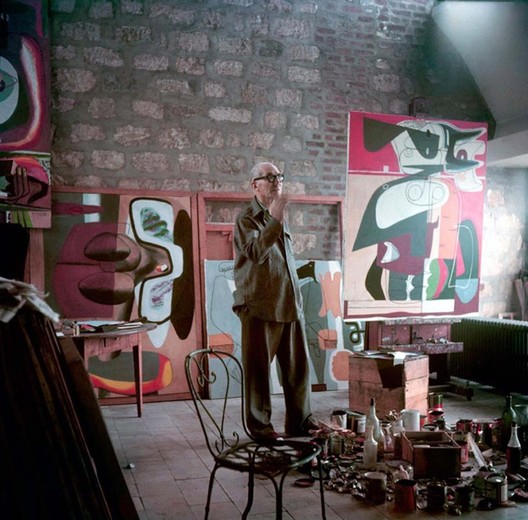