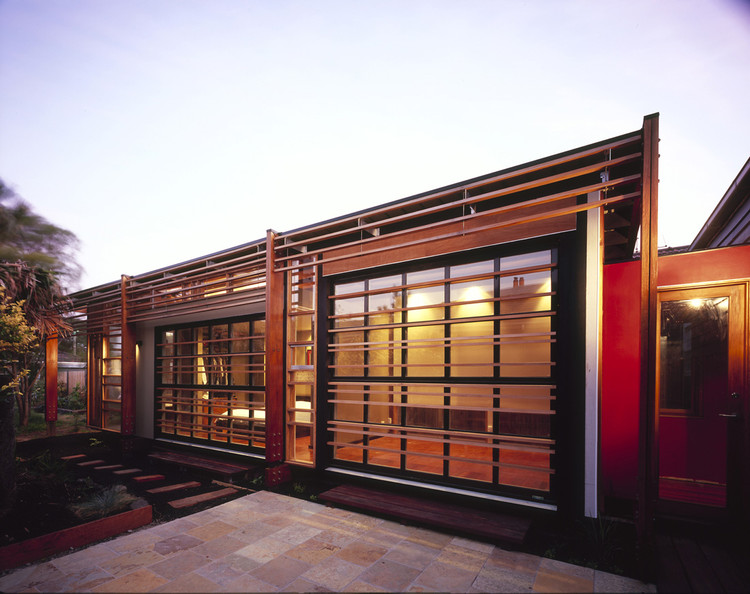 Text description provided by the architects. Andrew Maynard Architects present this residential alteration and extension to an existing double fronted weatherboard house in Melbourne, Australia. The brief required 2 bathrooms, a bedroom, living area, kitchen and increased connection with outside areas.

The context is typical of inner suburban Melbourne. The site is double fronted with a deeper than usual block running east west. The initial brief asked for an extension along the full width of the existing house. The response to the brief was that any addition should run along a southern boundary to maximize solar access to new and existing spaces and to bring external space into the middle of the living areas.

Our practice is interested in the possibility of malleable and mobile space, especially in residential design. We want buildings to respond to the emerging social conditions created by mobile technology such as mobile phones, laptops, PDAs, cars, planes etc. Though we have numerous conceptual designs that explore these concepts, the Essex Street house, with its removable walls, is our first tiny step towards building our numerous experiments.

The original house has been restored to its simple four room square plan. The new structure sits lightly beside it like a loyal companion. Rather than build a hard-edged or strongly defined object, the new structure has a blurred or vague edge. The recycled grey iron bark portal frames are of a larger, non-domestic scale. They were envisaged as an old relic of a pre-industrial age, an old, wise element to a new and vibrant addition. Within the robust portals is the delicate layered box. The use of screening and the glazed garage doors create a soft edge that allows the internal spaces to spill into the outdoor spaces.   Within this structure are the small, colorful boxes of the bedroom and kitchen. These objects separate functions and act as a bridge between the original house and the extension.

The long block has always been rugged, overgrown and wild. Our response to this site condition was to have the large, robust portals connected to the ground delicately rather than conquering or damaging the current ground plain. Hopefully the wild yard will reinstate itself around the base of the structure and make it appear to delicately hang over the ground plane.

By running the extension along the southern boundary solar access is achieved in the original lounge, the new internal spaces and the outdoor space shared between them. Along with the protected and sheltered yard the glazed garage doors allow internal activities to spill into the outdoor areas without the need for premeditation or separation throughout the year. Rather than hiding the bathroom function we have opened it up into the yard so that these relaxing and leisurely activities can spill into the yard.

Insulation, a sheltering context and well-designed sunshading makes the design an efficient home without the use of elaborate tactics or expensive equipment. The sunshading spacing was designed to minimize solar gain during summer and maximize solar gain during winter. As the seasons shift forest-like dappled sunlight plays throughout the internal spaces. A soon to be installed rainwater tank will be positioned along the southern façade where the roof drainage has been articulated to.

The internal plan is a simple linear organization, however the overall design is not a linear one. The layering between internal and external spaces creates an organic series of connections visually and actual between original, new and external spaces. The kitchen 'box' acts as the bridge between the old and new, acting as a negotiator between the two languages.

The primary structure is a series of recycled grey iron bark portal frames with 12mm steel connectors at each junction. Within the portal structure is a simple stud frame. The glazed garage doors have a steel surround that fixes directly to the stud work. Western Red Cedar battens shade the structure. Existing services have been extended. The client is planning to add solar panels to the new roof area. The roof water has been articulated to points along the southern boundary to allow rainwater tanks to plug straight into the current plumbing.