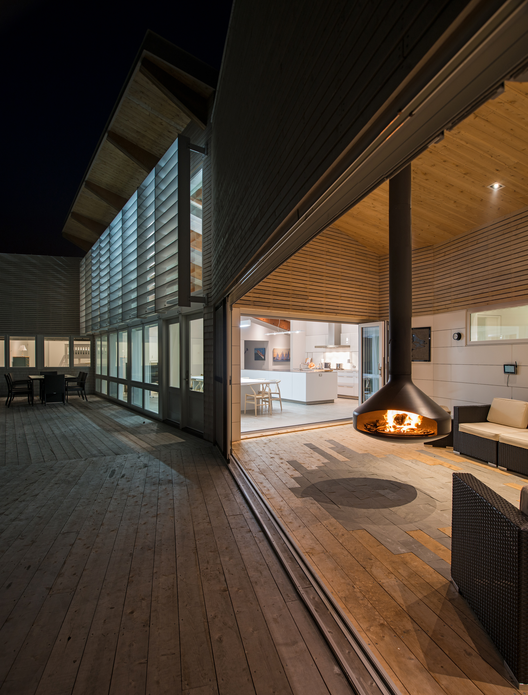 Shantih is a refuge. She is composed of multiple contrasting and duelling identities. She is modest and elaborate, finely crafted and at times repetitive. She is big, loud and bright while also somber, eerily mysterious and pensive. Her two arms wrap around and hold onto the land sloping away from her towards the infinite sea.

Shantih is a small beach house located in Hunts Point, a small beach town in Queen’s County, Nova Scotia, an area known for its lush, natural landscapes. The clients, who make their primary home in the nearby city of Halifax, required that their new beach house engage this rich landscape, while maintaining a modest public façade toward the road. The natural grassy bowl in the middle of the property had long been a playground for their young grandchildren and so the cottage was required to celebrate the field in the foreground. The beach house would need to provide a quiet respite from the busy city life, offering multiple opportunities for passive interior/exterior connections, while also acting as a gathering venue for the clients’ ever-growing extended family.

Shantih’s siting, form and materiality are all intrinsically linked to the Hunts Point landscape on which it is built.

The building siting is a consequence of two local natural landscaping features; a natural bowl situated in the middle of the property and a distinctly beautiful curved beach adjacent to the property. The beach and the natural grassy bowl make for the most distinct features standing on the land (micro) and from an aerial perspective (macro). The spread wings of the cottage conform to both land features, nestling comfortably into a sheltered, private area for the clients.

The economical shed roof is inspired by the form of local fishing sheds and shanties spread along the Nova Scotia coastline. The low-end of the roof faces towards the main road and public realm as a modest gesture, providing for a comfortable element of human scale at the narratives introduction.

The buildings’ exterior skin is composed of lightly stained eastern white cedar shingles, fine horizontal slats, exposed poplar soffits, stainless steel chimneys and a crisp white aerofoil brise soleil. The eastern white cedar, sourced from nearby mills in New Brunswick, is a staple of the regions design vernacular and requires little to no maintenance, as the wood shingles have their own naturally occurring protective oils.

As per the requirements of the client, the rear (street) of the beach house is a long and low horizontal shy line just above the horizon, while the private façade (ocean) is tall, proud and open to the western daylight and ocean view. The long windowless north face aims to economize the building’s energy use and create a barrier from the prevailing north-east winds. Secondary views point towards the driveway and exterior pool on the eastern (morning) side of the building. A thin strip window, running the length of the building, ties the ends of the building together.

Above all else, Shantih is consciously designed to utilize the local skill, talent and material language of the region. Building construction is economized by using cladding and framing techniques that are well known and easy to adapt in a modern vocabulary.

The main space is adjoined by corridors (the remaining 2 compression zones), which lead to either the south or north wings, or the sleeping wings. The south wing encompasses all of the primary dwelling units while the north wing houses the remaining guest rooms. The master bedroom wing is wrapped with a 180 degree view of the sea, the driveway and the adjacent tree-line. Concrete floors, exposed wood and locally fabricated millwork make up the space palette of the buildings interior.

Shantih’s entry and interior corridors guide the user through a processional narrative. With long dark corridors, compressed spaces and acoustic variation, Shantih is composed of purposeful contrasts in an attempt to build crescendos in the main living spaces. Shantih provides an intended drama – the joy of seeing the unfathomable view again for the first time repeatedly. The houses varying contrasts of light, space and sound with darkness, confinement and solitude builds that narrative.