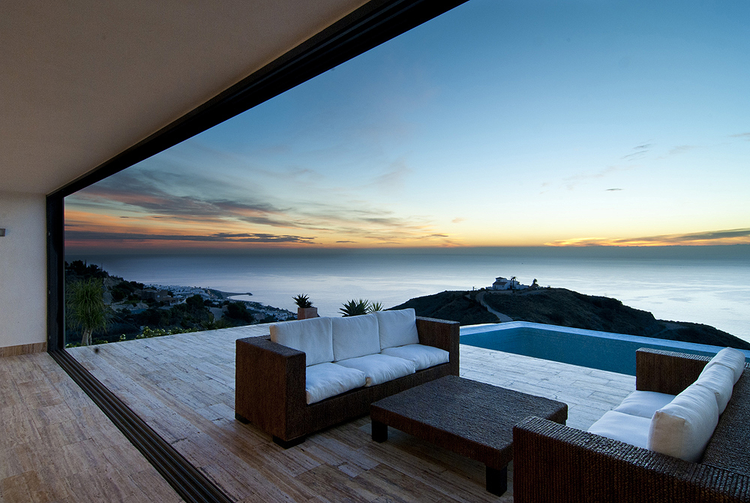 Text description provided by the architects. The site is located in Almeria, municipality of Mojacar, in the surrounding area of Cerro del Albar. It is a rugged topography, with steep and open distant horizon over the sea. On the site there exists a small platform, which will be used as base for the building. The project had to answer two questions raised by the client: One, offer a solution that would allow feeling the horizon as part of the house. Two, develop a housing program for a marriage with two children, according to the following needs: garage and kitchen; lounge dining room and office-library; main room, rooms for the children and guests; and a small sauna, workshop of sculpture and painting, and court-warehouse for drying and storage of parts.

The housing places on an existing platform oriented to the east, toward the Mediterranean Sea, in an area with a steep slope. Given the rugged terrain, the general organization of the project has been defined by the need to adapt in a rational way to the topography, avoiding dismantle that might be excessive and so minimize the impact that the building could suppose to the environment. The location of the home taking advantage of the small natural platform, minimizes earth moving and get a perfect adaptation of the architecture to the field. In lower levels, other platforms continue structuring the plot, creating zones of fruit-bearing trees and garden. Some of these platforms use existing stone walls in the plot, remains of ancient terraced plantations, thus recovering the character that had long ago the area. In this sense, the project maintains a constant relation with the environment, promoting the transition of scales and protecting the landscape value of the area.

The housing is organized into three bands that are displaced longitudinally: The services band, partially buried, anchoring the house on the slope. It organises the uncovered parking, court of service, pantry and kitchen, the latter with a small terrace. The central band receives the main elements of the house. On having been delayed with respect to the other two, it sets up a large patio where is proposed the access, protected behind the fold of the walls. Once inside, a small patio glass distributes the routes, introducing a diffuse light sifted by vegetation. The main double-height space articulates the relationship between the light and the horizon. Dining and living room establish a strong link with the sea, opening fully on a first platform that starts the dialog with the environment. This space is bounded by the dressing room and the main bedroom, which configure a cantilevered body over the visual flight of the landscape, again toward the coast line. The third band is the closure of the housing and its main facade. It includes rooms for the children, the guest room, the sauna, and the space for sculpture and painting, with a courtyard protected from the wind. A somewhat lower terrace provides an open space at noon, resolving the encounter with the ground.

The whole set is proposed as structural system of reinforced concrete, with Thermo-clay closure and solution of ecological flat roof supported by slab Filtron base. It is projected to finished with white monolayer mortar (with contribution of 10% of ochre) according to the architecture built in the area of influence of the Cerro del Albar. The pavement is solved with travertine marble, extending this finish to the outside to run ground platforms linked to the use of housing. In wet rooms and kitchen it is used compound of quartz and resins type Silestone to run tiled pavements. The interior woodwork is white pre-lacquered MDF. The external joinery is composed of triple aluminium clad: the outer element is a sliding structure of adjustable slats; intermediate carpentry, a Climalit glass enclosure; and the inner element, a sliding mesh anti-insect. At the opening of the lounge toward the horizon, there are provided two spaces where fully collect the woodwork. On the outdoor spaces, surfaces that do not constitute open platforms to the horizon have been finished off with crushed aggregate of rocks from the area. The earth retaining runs through wall of riprap, selecting rocks of the area that will allow the integration of the project on the environment. 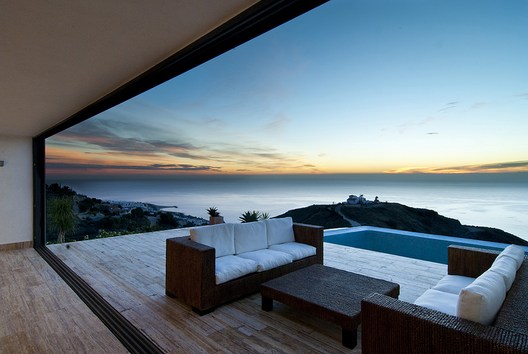