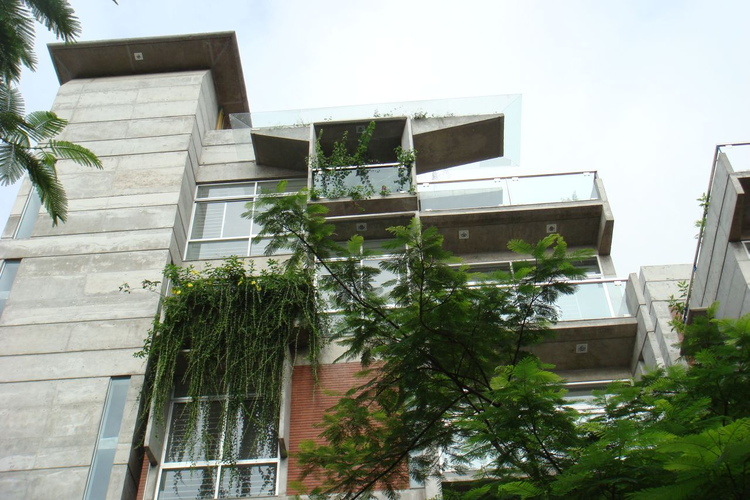 Text description provided by the architects. Dhaka, a five-hundred square miles city has over time become an area of complete urban mayhem. Getting a lake and a narrow strip of green patch on the back side (west) of the plot was a fortune in a city where total city green is not more than five percent. This eight family house is located at United Nations Road at the Baridhara Diplomatic Zone. A deal made between the land owner and the developer was to divide the seven thousand five hundred square feet plot in equal two pieces to construct two six-storied buildings of two-thousand-eight-hundred square feet area on each floor in order to share equally.

Utilizing seventy five percent of the plot area as per rule was a strong requirement from the clients; however, it became a challenge in terms of designing an open green space. The design suggestion here was to take forty square feet of small area from both the parties as a good gesture, placing along with eight feet gap between the two buildings and five feet road set back as per rule in order to create a two hundred square feet of a green patch and water body in front of the building on the east road. This arrangement was also accompanied by a no boundary wall notion and little benches were set as a token of respect for the passerby and the community.

The two buildings developed were almost identical in terms of the ground floor plans and parking area and the basic plan of four houses per building. The simple interior as required by the functional arrangements that connected the beautiful lake and large trees on the west, allowing the south east summer breeze to flow through the entire house with ample light round the day. The road side trees as they grew up spreading its light branches inspired the building to transform it alike into a vertical garden.

The use of exposed as cast structural beam and column exterior with terracotta brick infill is also a simple approach friendly to the subtropical climate of Dhaka. The scheme also developed the two roof tops of the buildings as community green with lawns, rain court (collects the rain water) and bushes around a small pavilion as a transformed subtropical architectural vocabulary addressing the concern of “shortage of green and open space” in the city. 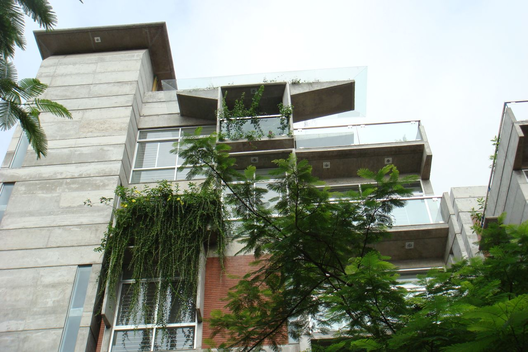