Save
Multi-generational: Living at Mühlgrund / ARTEC Architekten
Share
Or
Copy 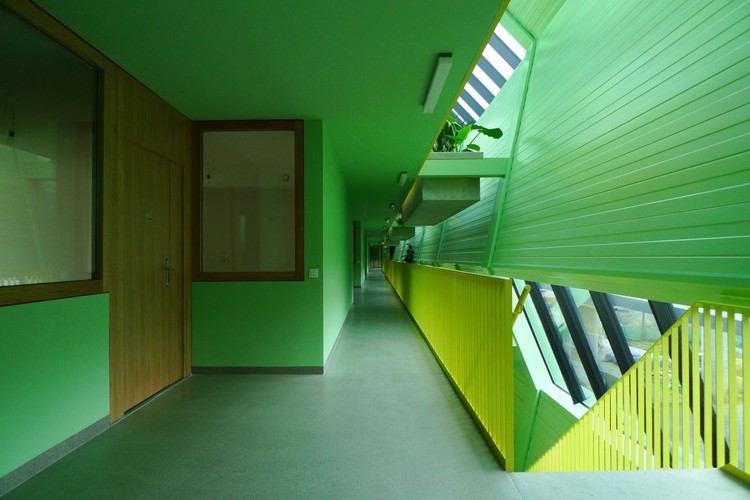 The Vienna rapid-transit line known as U2 originates at Karlsplatz and heads north, crossing the Danube. In Stadlau the tracks are elevated and pass over a train station. Just to the north of this convergence lies the Stadlau rapid-transit station. The tracks continue on, turning to the east and still elevated – at a height of 12 metres in this segment, and each direction supported separately. Parallel and to the south of the elevated tracks, at a distance of 8 to 12 metres from them, is the site of the 7-storey, 90-metre-long, 15-metre-wide building – the allowable massing determined by an urban design competition. The bar-shaped building, with only a minimal strip of land surrounding it, screens the low-slung structures to the south – also just recently completed – from the tracks.

In response to the setting, which is characterised by the “Columns of Karnak” to the north and a rural fabric to the south, the architects developed a new version of the balcony-access apartment house, with stairway and elevators on the two ends of the building: a vertically kinked skin directs and diffuses the light, and toward the top, combined with a metal wall perforated with window openings, cloaks the building’s ends and the elevation facing the rapid-transit line. This creates a hall within the thermal building envelope (constructed in the passive-house energy standard) with distinctive characteristics: long, narrow and high, with varying incidence of light and a variety of spatial experiences.

A cascade stair in the narrow zone between the corridor and the metal wall leads from the main entrance on the west side, through the building, to the top level. In between is a vertical garden with 1000 plants in eleven 7-metre-long, prefabricated-concrete planters, whose tension cables were developed three-dimensionally. The entrances to the flats are recessed, doubling the width of the corridor. Oak windows between the apartments and the hall provide daylight and views to the internal garden.

The roof terrace, for use by all residents and nestled between the beds of plants, compensates for the lack of outdoor space at ground level. The compact one-bedroom apartments – most of which can be enlarged by annexing the neighbouring unit – each have a loggia extending the width of the apartment, and bespoke sliding-textile solar protection situated in the outermost layer, all oriented to the south.

Situated on the ground floor is a flat-share with nursing services and large terrace. The apartments on the ground storey – which is raised slightly above the ground – are connected to an additional zone below them consisting of workshops, studios, doctors’ offices, etc., accessible directly from the sidewalk. In addition, there is a commons for the residents equipped with kitchen appliances, and a door leading directly outdoors. The apartments on the top two storeys also have two levels, and there is a terrace on each of the levels.