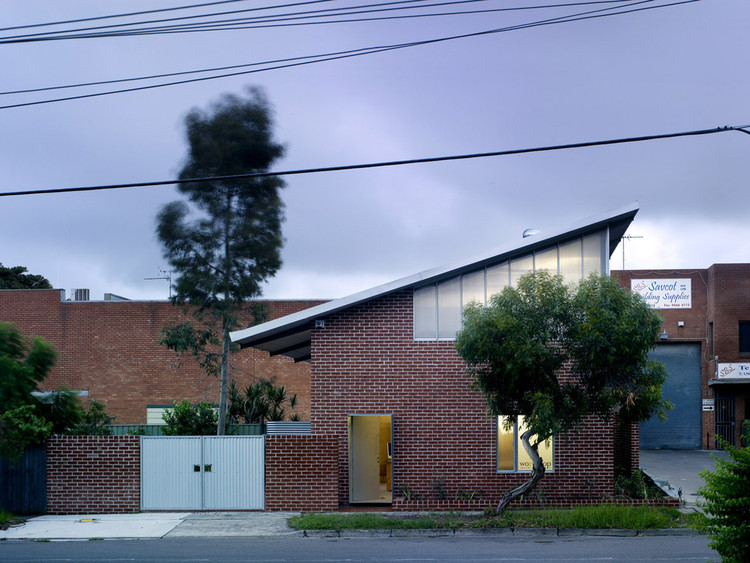 Text description provided by the architects. In 2002 we bought a dilapidated weatherboard cottage on a corner block in an old industrial area of Botany. Since then we have gradually restored the cottage and opened it to the north and the garden by replacing the exterior wall with a sliding glass and timber door and adding a deck and outdoor bathroom.

In 2008 we completed a separate building on the northern boundary of the site that now accommodates our architectural practice. It is a brick and steel building reflecting the vernacular of the surrounding industrial buildings. We sculpted the volume in a pragmatic way, using sun shading modeling and close study of the relative scales of the (small) house and the (massive) industrial buildings around it.

The project was completed on a very tight budget (approximately $1,800 per sqm). The construction methodology was borrowed from the surrounding industrial sheds which are beautiful in a pragmatic and formal sense. We used steel portal frames on a concrete slab, clad in brick, lined with C/D grade, plantation grown construction ply. The windows are made from 50mm steel equal angles, the lighting is T5 fluorescent battens placed along the steel structure. The building is well oriented to the north and heavily insulated. The open mezzanine allows a stack effect to naturally ventilate both levels through operable roof vents. The studio remains cool during the summer months and a single gas bayonet provides ample heating during the winter months. Rain water tanks are plumbed into the bathroom and a solar voltaic array on the roof of the house provides a majority of the electricity needed during daylight hours.

We made a decision when we bought the house that a majority of what we planted in the garden would be edible. This has continued around the Studio, we have planted orange and olive trees along the street elevations with oregano, thyme and rosemary for low ground cover.

Many interesting issues arose from the development of this project with reference to new concepts of mixed use sites. Botany Bay City Council (and many other councils around Australia) see the importance of developing old industrial areas in a way that can accommodate residential, light industrial and commercial functions. If people can live near their work, work near their shops and walk safely between them, the suburb has a constant life to it that benefits all. It is through projects like ours that these intentions can be tested and developed and we are pleased to have been able to work closely with the council planners to achieve this very successful outcome.

Both the house and the studio face into the garden which is shared by architects, children, a dog and a productive vegetable garden. Work and life boundaries are blurred by the architecture. Commuting time is nil and family life is holistically included in our architectural practice.