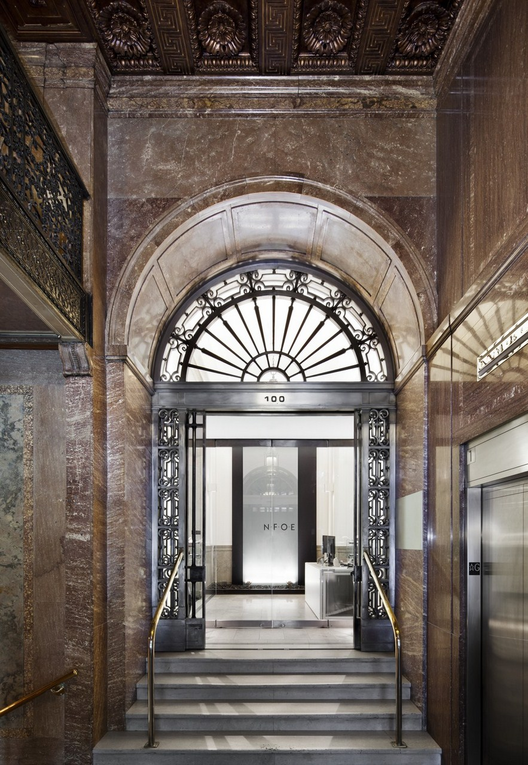 Text description provided by the architects. Situated in the heart of the city, Bureau 100 is surrounded by several large projects associated with Barott, including the majestic Aldred Building (designed by Barott in 1929 and regarded by many as his most accomplished work), the modernist highrise for the Bank of Montreal’s head office (designed by Barott’s firm and inaugurated in 1960), the Royal Trust Building (designed by the American firm McKin, Mead & White, with the participation of Barott, in 1912), and the National Bank of Canada Building (a 1965 project for which Barott acted as consulting architect for the firm David, Barott and Boulva of which his son, Peter T. M. Barott, was one of the founders).

A successful synergistic relationship with the owner (winner of the CIGM Commercial Heritage Building Award in 2005) resulted in a large-scale restoration project on the first two floors, occupied by NFOE. The interior, which had deteriorated considerably, was returned to its original state, with impressive Corinthian columns, ornate ceiling mouldings, and original woodwork. All of this, plus the immense windows and light colours, contribute to creating a stimulating work environment.

The project’s aesthetic approach links past and present in a subtle play between verticals and horizontals. Both floors have been freed of all the partitions of previous renovations. The simple, elegant furnishings act as a background for this space rich in architectural details. The workstations in the open-plan space encourage interaction among work groups, while offering the possibility for individual thought and reflection. Zones for improvised meetings are located in proximity to the workstations. The levels are composed of open spaces that emphasize the original ornamentations of the columns, ceilings, mouldings, and woodwork. The bank vault is still in place on the ground floor and is now used as a library.

Each floor has its own distinct ambience: the ground floor is grandiose, whereas the upper floor is intimate. On the ceilings, the exposed infrastructure vies with the ornamentations. The ground floor has a high (17-foot) ceiling and large windows offering a stunning view of Old Montreal. It is bathed in natural light, which is diffused into the workspace by the light colour of the walls and furniture. Dark accents on the walls give depth to these well-lit spaces. The second floor has a lower ceiling, encouraging intimacy in the work areas. A series of superimposed drop ceilings amplifies the height reduction and acts as a series of horizontal slabs contrasting with the vertical columns.

The different interventions are composed of pure, minimal lines. A dialogue is created among the glass, drywall, and metal – among strength, transparency, and the weight of the materials. Only in the ground-floor waiting area are there touches of colour: a green monolith and a metal strip floating on a glass panel play against the white classical columns.

The original woodwork and fireplace have been preserved in the ground-floor conference room. Above the woodwork, the dark-coloured walls amplify the height under the ceiling and visually detach the ornate mouldings from the wall. The lighting fixtures, with a contemporary aesthetic, seem to fall, like water drops, from the ceiling to the floor. These original and contemporary ornamentations add cachet to this space, which opens on to Place d'Armes.

The mezzanine overlooks the ground-floor workspaces. A blue wall spans both floors along the interior stairway behind the workspaces. This colour leads to the second floor and is continued in the cafeteria. To ensure the partners’ privacy and confidentiality, their offices are at one end giving onto Place d'Armes. Visual permeability is preserved with the use of glass panels as partitions and doors. The upstairs conference room, at the back of the floor, overlooks Place d'Armes with a large window with semi-circle woodwork. The lighting fixture over the conference table echoes the shape of the window. 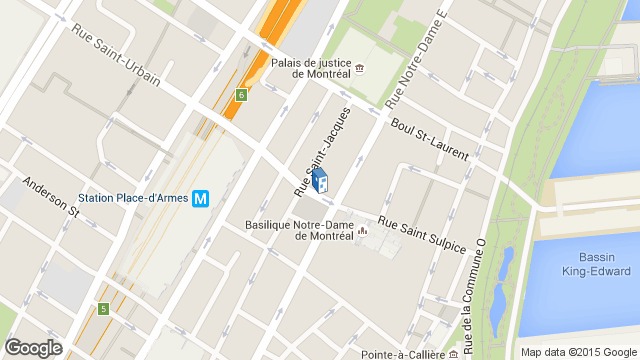 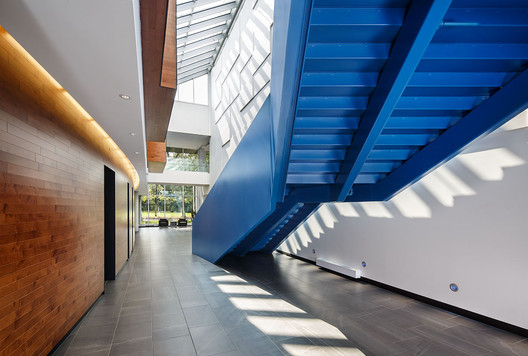