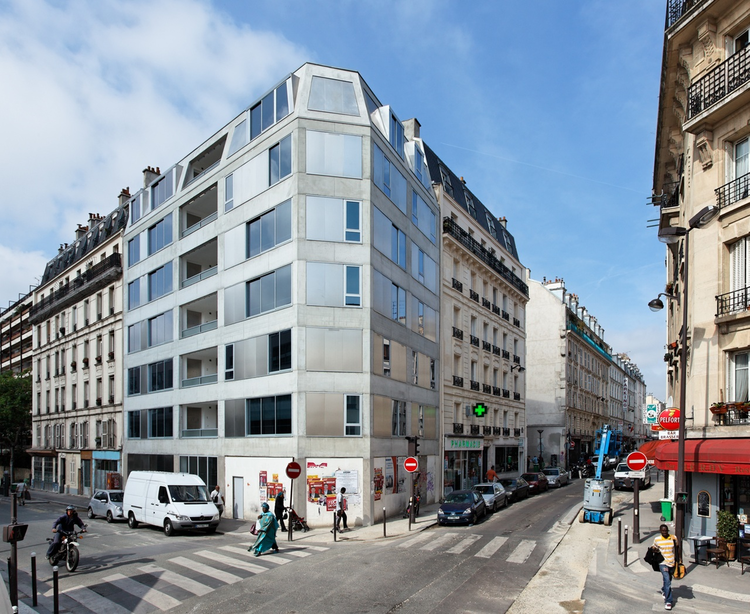 Text description provided by the architects. This project started as a diagnosis on an existing building, and it is only after a precise analysis of the construction, that the choice of a demolition / reconstruction was made. Indeed, the existing building, built at the beginning of the century, was of a small interest, architecture and urban wise, and was handicapped by a very constraining inner organization, that made his restructuration impossible. The project is thus conceived as the ghost of the former building, but also as an antidote to the problems it was revealing.

The new building borrows the smoothness and compacity of the former building, in a slightly oversized bulk, in scale with the two neighboring buildings, and in order to qualify in an appropriate manner this typically parisian chamfer angle. The building shows off a certain neutrality, in accordance with the tradition of the domestic parisian architecture, but also as the affirmation of what should be the hardcore of any domestic architecture, an artifact  that expresses little but strongly : its own construction and the pleasure to inhabit, here and now. The weaving of historical links, and the enhancement on the "art of living", aim also to shape a timeless architecture, showing a slight ambiguity concerning the date of its construction. As the diagnosis has established, the former building had the main default of a very frozen inner organization, that makes its possible restructuration costly and complex. The idea to inscribe the new building in the long term, implied consequently to think of a structural and spatial organization that create some flexibility in the future evolution of the building. The slightly oversized bulk has thus allowed to compensate the tightness of the site by using its section : 25cm thick concrete slabs span the 7m between the load bearing facades, the perimeter walls and the central circulation core. As a result, the building offers in plan but also in its elevations (light-weight wooden frames) a great flexibility, that will make its evolution on the long term easy.

The leading parameter in the organization of the project lies in the presence of an open urban landscape, the projection toward the outside of every inner spaces of the building compensating for the exiguity of the plot.

The size of the plot combined to the demands of the program weren't allowing to create real private outdoor spaces. We consequently proposed oversized outside landings, that extend the indoor spaces of the dwellings, and are designed with the same care: sanded concrete floor, full height entrance door, stainless steel lining on its facades.

The reversal of the project toward the outside is also felt in the design of the windows. The concrete frame of the façade creates large cells in which are inserted light-weight elements, blind or glazed. The aluminium window frames outline panoramic openings and benefit from sills lowered to 50cm; the design of the window is inverted: the frame is placed on the outside of the reveal, the railing and the black-out screens inside, protected from winds and rain. The glazed frames slide on two planes in the small rooms or on three in the living rooms, creating 3,5 by 1,85m high openings that make the whole room a balcony on the city.

The making of the building aim to a very factual expression of the materials. To enhance the monolithic appearance of the building, the concrete façade is poured without the traces of the formwork spacers (placed inside the openings), nor joints showing the restarts of concrete pouring. The light-weight elements (stainless steel panels and aluminium window frames) are placed on the same plane, to enhance contrasts and minimized offsets and other details that make façades age poorly. Structure and infills are thus associated without the usual mediation of offset joints and other precious articulations.

This articulation between structure and infills echoes more generally to a dialogue between the urban primary order of the structure, and the necessary irregularity of a dwelling program (typologies puzzle, position of the windows according to the rooms…). The organization of the building creates for every dwelling a sunny and clear view on the east façade. 2 rooms apartments are stacked in the south bay, 4 rooms apartments are organized as upward or downward duplexes in the north bay. The pattern of the façade is a clear transcript of this organization, regular on the south bay more complex on then north bay, duplexes creating groups of three levels. In this way, the building expresses this kind of baggy order that should be the main quality of any domestic architecture. 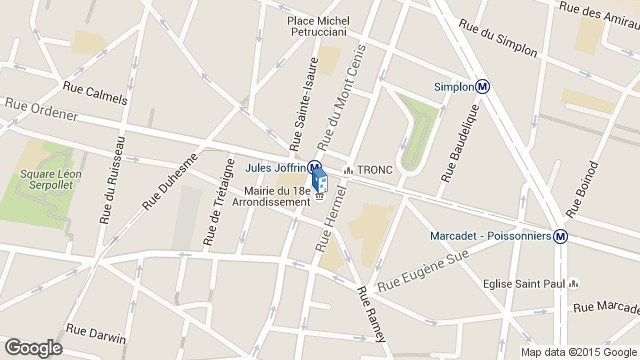