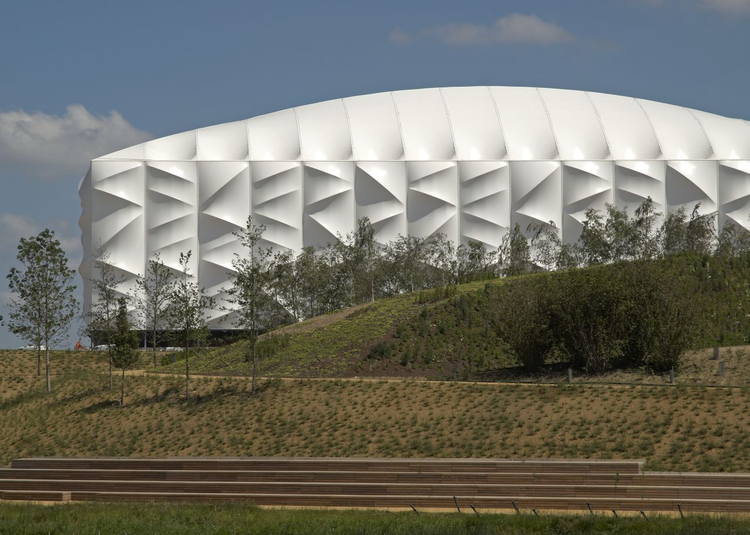 Text description provided by the architects. The Basketball Arena by Wilkinson Eyre Architects is one of the biggest temporary venues ever erected for any Olympic and Paralympic Games and the third largest venue in the Olympic Park. Located on high ground at the north end of the site, and clearly visible from various vantage points in the Olympic Park, the Arena will provide 12,000 seats for the basketball heats and handball finals, as well as 10,000 seats for the wheelchair basketball and wheelchair rugby competitions. Despite a tight budget, the Arena is set to be one of the most iconic and visually dramatic buildings of the 2012 Games.

The brief called for a structure that was simple to erect but also provided a world‐class sporting venue for some of the most popular Olympic events. Alongside these factors, sustainability was a key driver in the building’s design: the arena has been made out of robust individual components that can be easily dismantled and subdivided for reuse, with over two‐thirds of the materials and components used on the project identified for reuse or for recycle.

Wilkinson Eyre has used an architectural language that remains distinct from the surrounding permanent venues, overtly celebrating both the best of British engineering and the temporary nature of the structure through innovative and economic structural and cladding solutions. Lightweight, simple building components have been used instead of a concrete structure usually found in stadia architecture, allowing the Basketball Arena’s steel frame and cladding to be constructed in just six weeks.

The 30m‐high rectangular volume (the equivalent of a seven‐storey building) is made out of a steel portal frame and wrapped in 20,000 sqm of lightweight phthalate‐free and recyclable PVC. This translucent bespoke cladding is stretched across minimal steel framing modules that push the fabric out and create an elegant and three‐dimensional undulating pattern across the facades.

The roof fabric includes an interwoven blackout layer that eliminates daylight during game sessions and maintains fully controllable artificial lighting for the media. The external walls are translucent, allowing daylight to filter through during the day and artificial lighting to be visible in the evening.

The variation of surface qualities used throughout the structure help animate the building’s exterior, with the expression of the building being derived from the play of sunlight and night‐time theatrical lighting across the fabric surface. Wilkinson Eyre worked with United Visual Artists, specialists in concert lighting and installations, to create lighting and colour‐changing effects for the evening games. The result is a dynamic illumination which, at night, transforms the white surface into a variety of saturated colours and strong silhouettes of the sub‐structure, creating the biggest light installation on the Olympic park.

Modular accommodation units that serve as the back of house areas are located outside the Arena volume, which also shares LOCOG overlay facilities with the Velodrome and BMX Track. These will include warm‐up courts and areas for catering, security, waste management and the media. 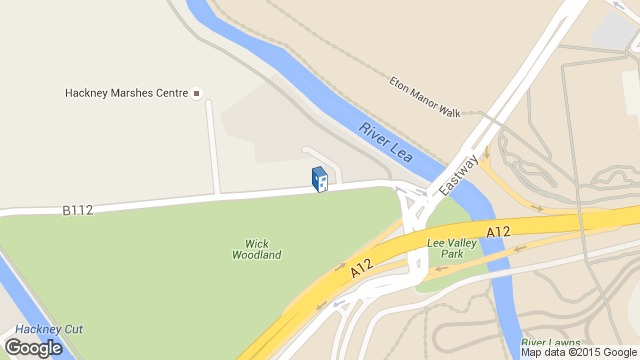