Save
Expansion of the Hospital de Sabadell

Text description provided by the architects. The Sabadell Hospital has been extended in a first phase with a new building perpendicular to the old ones, and a new volume with a staircase and elevators. The simplicity of the new building gives a new image to the whole hospital, and has permitted its construction without notable incident in the normal operation of the hospital.

The public areas are mainly organized on the side of the park, providing nice views from all the waiting rooms and corridors. On the other side, the technical areas are connected with the ones from the existing building through the new volume containing the staircase and elevators.

The lobby of the new building connects with the existing one, and together with a large porch creates a large area of access, related to the park and the Gran Via (the main street that gets to the hospital).

Sustainability is present in many activities:

- use of recycled materials

- use of construction methods that decrease the execution timing

The most apparent is the system that can adjust the solar radiation protection, formed by vertical slats. They move automatically according to the angle of the solar radiation, allowing the light to come in, but closing enough when the sunlight is bothering. 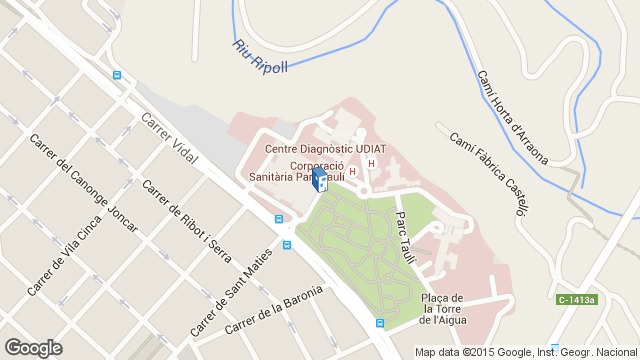