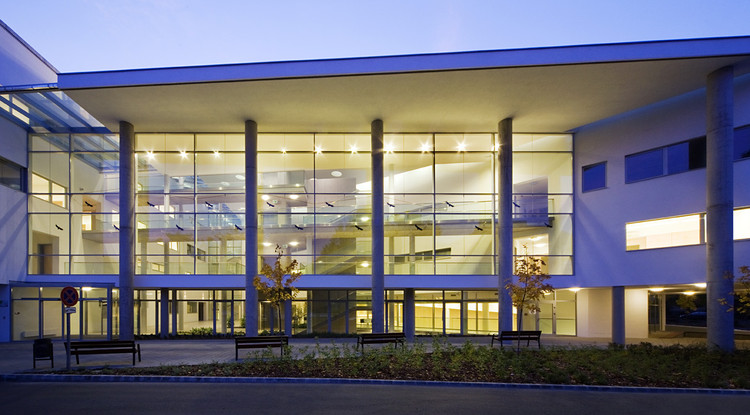 The centre is made for merging the following three clinical laboratory departments: the Department of Laboratory Medicine, the Department of Medical Microbiology and the Genomic Medicine Institute. The architects’ task was to place the three laboratories in one building block with the constraint on giving free access to the student to reach the auditorium and the practicing laboratory, but keep the clinical laboratories opened only for those who have got permission to it. They have answered this task with connecting two wings in a V-shaped form arranging them along the plot’s edges and with organising the indoor traffic in a dividable way.

A gap in the architectural time layers

Following the function and the inward spatial structure, the architectural volume is determined by the triangle shaped building plot on one hand, but on the other hand the architects’ purpose was to design a building, which is able to bridge the different architectural periods of the university. Serving this purpose, the architects decided upon to use the triangle as the shape of the ground plan as the neighbouring Science Block (planned by Tibor Mikolas in 1973) use the arrow form towards the Great Forest too. Also, they used the same boxes for placing the windows in like by the other building and mirrored this solution on the south laboratory wing’s façade. But the ratios of the three-story building respond to the turn of the 19th century’s historical eclecticism of the university.

As the architects say: “ We had to complete a design right on the border of different architectural time periods. Thus we tried to communicate with both time layers – the turn of the century’s historical eclecticism and the 1970s – but meanwhile we intended to react the design of Floris Korb and Kalman Giergl too, the Scientific Block is situated so close, just a step away from our house, that the affect of it is much stronger on our design.”

Principles of the design plan

The two wings of the building open up toward the main pedestrian path and the space in between the wings is attached to the building with a glazed façade as an entrance hall, and as a result the building reached its triangular outlines. The tempered hall as an intermediate space relates to the laboratory wings just as tightly as to the outdoor space.

From here one can have an insight into the auditorium and can have a perfect overview of the glassed concrete staircases and indoor bridges and of the square front of the building. Communicating with each other, the open spaces give transparent and easy atmosphere to the hall and the slender pillars and skylights enhance this effect even more. As a result the natural light can fill the indoor spaces through the hall. 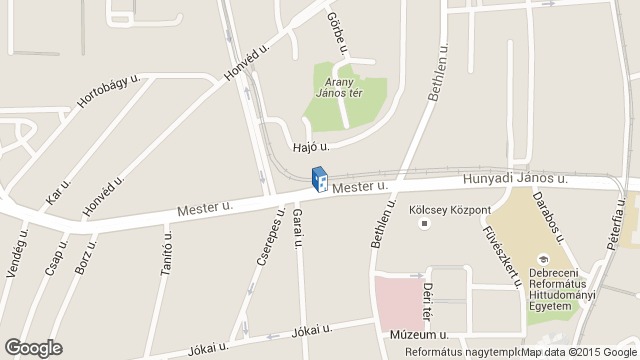 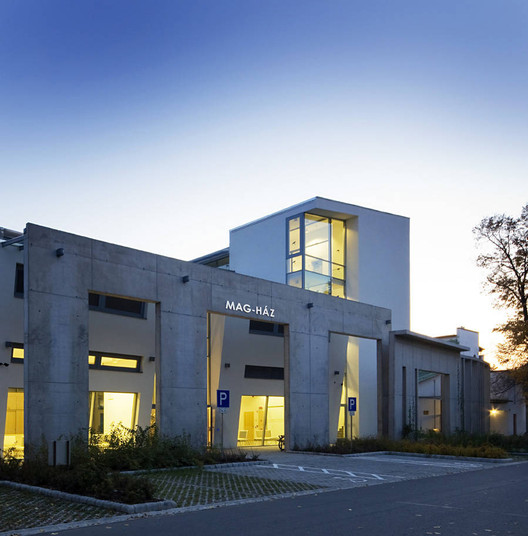