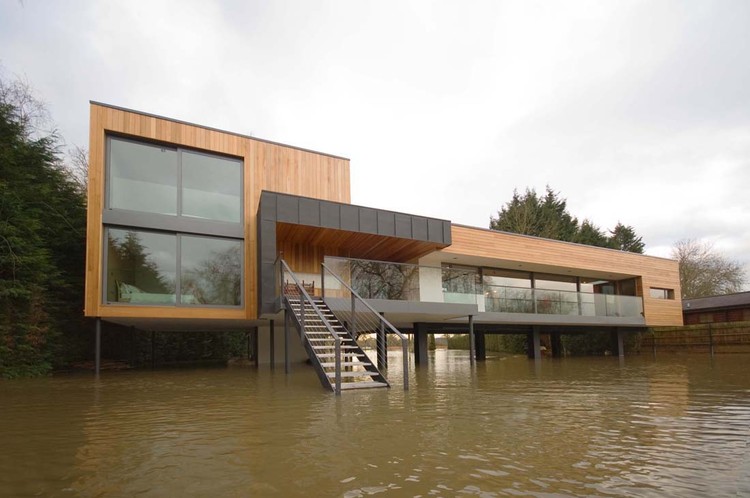 Text description provided by the architects. The clients had moved into a rather ordinary brick and tile 1970's house on the banks of the river Loddon in early 2005 and wished to rebuild using a system-built house from the continent, but had become disillusioned with the cost and inflexibility that this offered and so approached us as they had been impressed by a house some 400 meters along the river that we had completed the previous year (The ‘Attwood house' which went on to win the Grand Designs Best Remodeled House in Britain Award in 2007). Initially, we offered to come up with a sketch design for a small cost on the basis of no-win, no job! Happily, they loved the concept and after a few months of developing their ambitions, we arrived at the final design.

The brief segregated the house into three distinct zones; an open living space; a guest room/ gym area; and a bedroom area. We based our concept on these three elements to create wings that adopt a pinwheel form. The whole ensemble is raised up on columns to deal with the fact that the river is subject to seasonal flooding to a depth of just over one meter. The house occupies roughly the same position as the existing, and is set parallel to the river but as the plot twists towards the lane, arrival is angled around an entrance court.

A dark zinc-clad wing is pushed forward receive a staircase that slices up into an open hood that is timber lined, with a glazed room to the side containing guest suite that doubles up as a gym. The stair arrives onto a an entrance balcony, with glazed door leading into a central hall space - this is the day room, dedicated to outdoor living and leads out onto a large deck, complete with hot tub beneath a zinc canopy. Following the zig-zag of the pinwheel, a staircase then leads down to a garden deck, with boardwalk that arrives at a landing stage on the river's edge.

To one side of the central element is a long, open living wing, resting on a cantilevered steel table that frames parking space. This is a cedar-clad element, with full height glazed wall onto a balcony to the river façade and a projecting linear oriel onto the north, garden façade. The space is divided into kitchen/ dining areas with a timber storage unit to the far end concealing study.

To the other side is a cubic bedroom block stood on spindly columns. Again, cedar-clad this contains bathrooms and two bedrooms to the lower level and a top-floor master bedroom eerie.

The house is to be steel framed, with timber stud infill; cedar and zinc-clad with aluminium-framed windows (frameless glazing to gym area); single-ply roofing.

The house is run by a computerized building management system that controls not just heating demands, but also lighting, solar control and audio-visual installations. The walls, floors and roofs are highly insulated using sheep's wool insulation to create a highly efficient home.

The house continues our interest in natural materials that weather well, and an architecture that seeks out an embrace and celebration of nature. 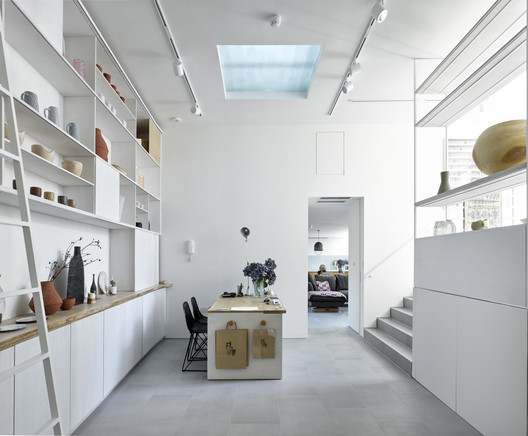