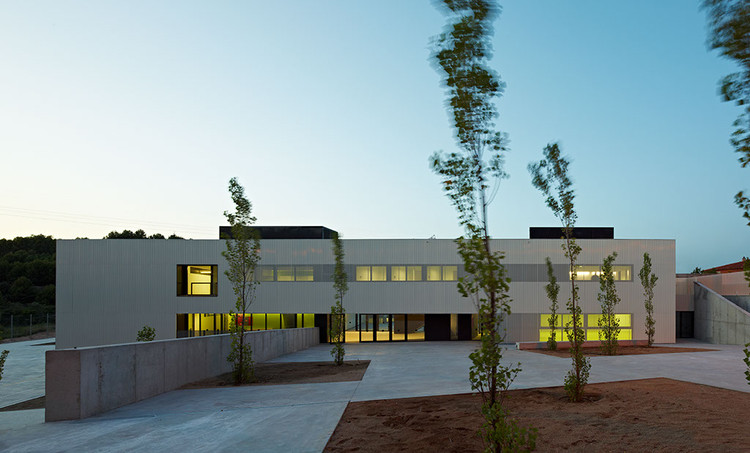 Text description provided by the architects. Castellbisbal is a municipality in the province of Barcelona. It is a town of about 13.000 inhabitats, situated in a geographically rugged area with agricultural tradition that actually has turned into an industrial activity.

The demographic progresión of Castellbisbal in recent years has gone hand by hand together to a strong urban growth complemented with the construction of new facilities to meet the demands of the arising population. The kindergarten, lower and high school (3-16 years) is an example of this.

The planned location for the new building is located on the north part of the town, right next to the cementery.

The plot limits to the east with Major street and to the south with Dr. Llarc street. It has an area of approximately10.372,95 m2and L-shaped geometry with unequal lenghts. The main slope goes downhill from east to west, reaching a maximum height of about7 metersin between its farthest points.

A high voltaje line and the minimum distance that must be maintained to the walls of the cementery are the limits added to the one of the own plot.

The concern for the organization of outdoor areas to avoid useless areas, causes a new limit, self-imposed, which reduces even more the scope for action. The disposition of the outdoor areas generates a visual sight without barriers that drown the leisure hours of students.

The resulting space is occupied by a building, which out stands at the perimeter of a cloister, empting the interior space used as a patio.

The program is divided into three functional levels that appear as the ground level looses height. From the Major Street a unique floor is recognizable as the other levels are below the ground level of the street.

This level of organization responds to the desire to minimize earthworks. The new topography is suited to the new uses, as well as to avoid a construction of greater impact.

The main entrance to the building is through a large inclined plane that leads to the intermediate level, thus, reduces the vertical routes within the school. This great space will be closed once the students have entered school in the morning, becoming parto f the recreational areas of the center.

Once the main acces is closed, the access to the school will be available through the kindergarten and administration access.

The outdoor spaces are designed to form a continuos stream bottoms to avoid residual spaces. You may move from onte to the other without going through the same point again. The treatment of these areas combine the hard surfaces with benches and green spaces with deciduous trees.

The building is seen as a compact volume, clear geometry, which avoids the major linear routes to be closed on itself causing an outdoor space in the inside.

This space, as well as providing lighting and ventilation, causes visual cross sights from all of its sides while leading as through its slight slope at the courtyard areas.

The same resource is used in the main access, a slightly inclined plane that guides almost in a natural movement the students into the school. The entrance area is designed combining the hard surfaces with benches and green spaces with deciduous trees.

The realization of the skin of the building is proposed with lacquered microwaved aluminium sheets. This material achieves an excellent definition of the volume while its stripes softens it to the senses.

The composition of the facades combined with deployé lacquered aluminium, other metallic which allows us to ignore the position of openings and at the same time protects from solar incidence.

The west facade is formally resolved with a single opening with ajustable slats to hide modules that a number of different program windows.

In opposition to this uniformity large openings that are strategically distributed help to lighten the volume of major proportions.

On a constructive sense prefabricated concrete elements have been used in the structure and in this elements that are used as facade support to the ventilated facade systems of different lacquered aluminium (flat sheets, punched and deployé various sections) to achieve a specific solar control and greater energy efficiency, and to improve acoustics conditions in the center and a reduction in construction waste. There has been an interest to work with local providers and to reduce indirect environmental impacts.

At the same time different systems are placed to reduce consume: a system of solar panels for hot water, a rainwater collection system for irrigation and toilet cisterns, control systems and lighting low-power sensors with presence, and photoluminescent systems, ventilation system control CO2 sensors, cross ventilation in all rooms, the creation of outdoor spaces and planting deciduous trees to improve the external conditions. 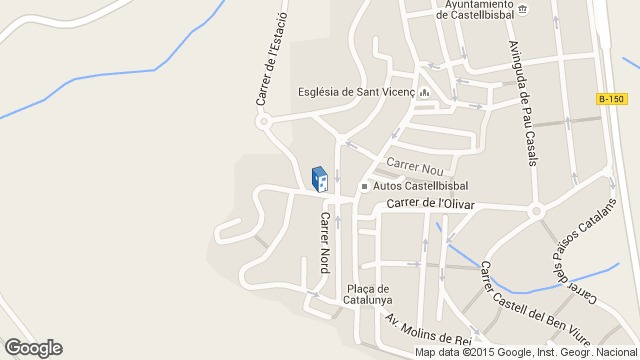