An OMA-designed temporary pavilion at the 2012 Cannes Film Festival was inaugurated today with a screening of Kanye West’s debut short film Cruel Summer. The pavilion, with a design led by Shohei Shigematsu, is a raised pyramid containing a seven-screen cinema invented by West’s creative team, Donda. 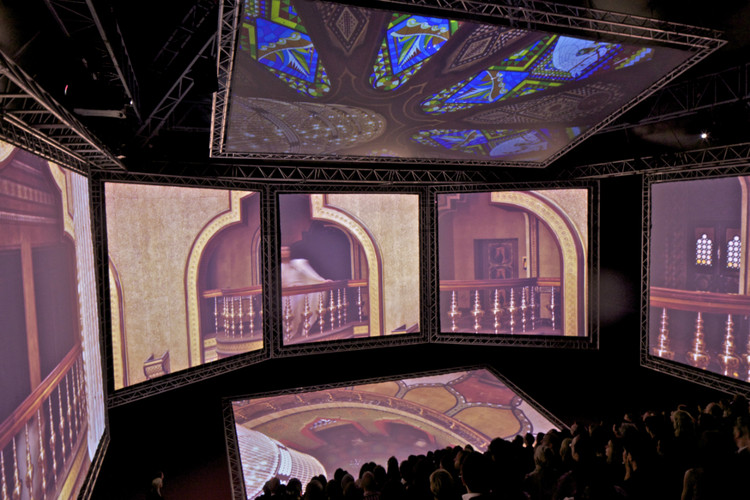 The pavilion is designed to immerse the audience in a space defined by seven screens of cinematic proportions (17’ x 17’, 17’x30’’). Shot with a custom seven-camera rig in Qatar, Cruel Summer was envisioned for this space as a constellation of projections that wrap around the audience through the configuration of the screens.

Located along Palm Beach, the pyramid’s canopy is hemmed to open up a panoramic backdrop of Cannes and the Mediterranean while creating an effect of levitation above the red carpet. Filmgoers ascend into the pyramid along a continuous red carpet that widens into the 200 seat auditorium. OMA worked with Cannes-based production team Ar’Scene to design an optimized triangular steel frame to accommodate the pavilion’s unique technical requirements.

“The pyramid subtly distinguishes itself from the context of white event sheds in Cannes while achieving a structure able to suspend the complex screen, sound and projection installations,” partner-in-charge Shohei Shigematsu commented. “We are excited to be involved in developing this prototype for a new cinematic experience, together with other creative entities.”

The project was designed out of OMA’s New York office with project architect Oana Stanescu in collaboration with Donda and 2×4, Inc. The pavilion will be open for two days of public screenings on May 24 and 25.