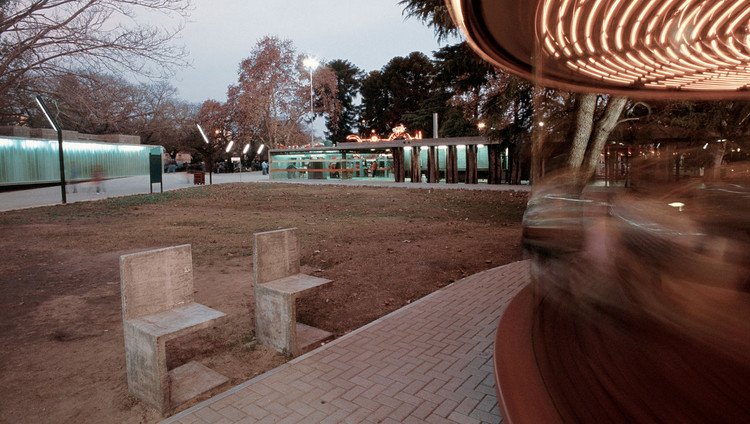 Text description provided by the architects. We were commissioned to plan the infrastructure of an amusement park in The Independence Park of Rosario. Two pavilions and the urban equipment were designed. One of the pavilions is a public restroom, offices and dressing rooms for the personnel; while the other one is an outdoor kitchen and a lounge for hosting parties.

There is a contradiction between the two buildings. The Restroom Pavilion is elevated and appears to be floating, showing the vagueness of its light. The other one has a grounded presence of trunks raising from the soil, just as plants do.

The first impression I had of the site was the outstanding contrast between the luminosity of daylight and the darkness in the shade of the grove that turns the area into an unreal night, in the way Magritte’s paintings do in the series “The Empire of the Lights”, in which he explored the simultaneous appearance of day and night. On the other hand, the grazing light seems to be chasing the observer through the vertical of the stems. The project makes sense in this play between the light and shade.

The posts that line the perimeter and support the roof slab are made of trunks from Quebracho trees. Though they have a handcrafted appearance, we consider these hard-wood timbers as prefabricated, even if it is the work of nature. The slab is simply supported by the trunks and anchored to a wall at one of its ends. In this structure the dividing partitions hang from the roof to increase the weight and stability. This way the weight is no longer a problem, rather it becomes the solution. In the interior nothing touches the floor, even the sink drains stop a few centimeters from the ground in order to drain freely. The counters and the storage room’s floor are wedged against the “reinforced concrete curtains”.

The building disappears in the context, the trunks blend with those of the nearby grove and only the straight line of the slab appears to hang between the foliage and the trunks, as the only sign of human intervention.

As the faint glow of a lantern attempts to guide one through darkness, the pavilion discretely lights the entrance to the park. This way, we intended to assign a new role to this part of the project, which is usually hidden.

A reinforced concrete structure enclosed with U-Profile glass, the only expression is the structure itself. The interior layout of this structure allows both privacy and a clear visibility of the circulation thanks to the use of this translucent glass, which makes it possible to distinguish silhouettes from the outside.

The cast in place concrete is left without any finishing both outside and inside the building. The concrete and the red of the Quebracho´s sinks are in contrast with the shiny surfaces of the glass and stainless steel acting as mirrors blending figure and background; just like in Magritte’s painting “The Human Condition”. 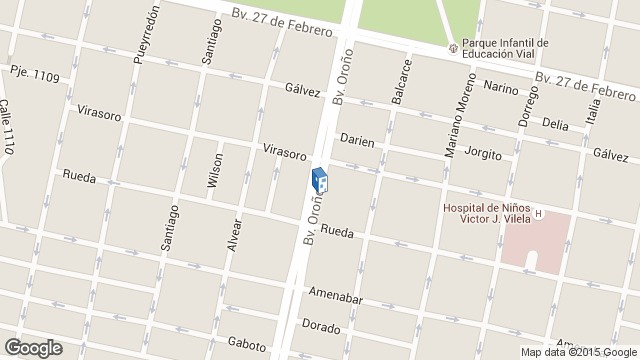