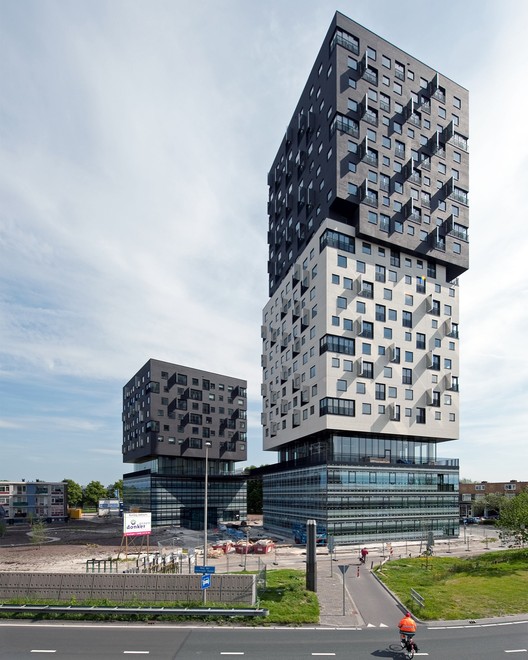 “La Liberté”, social housing and office building, has been realized within a constant collaboration between the client, the architect and the City of Groningen.

The project is a strong symbol of the urban renewal and the social development of the city. New signal in the landscape, “La Liberté” has known an immediate success: all the apartments are already rented!

Groningen, a young city, numbered among the 10 important cities of the Netherlands, is been developing since 2004 a housing campaign called “The Intense City”. By avoiding the suburbanization, protecting the rural areas and guaranteeing quality urban spaces, the municipality wishes to keep the city compact and alive.

Already strengthened by this new urban vision for Groningen, the city has launched afterwards the Ring Zuid Groningen initiative, to develop more particularly the neighbourhoods lining the main highway of the country, Weg der Verenidge Naties, located in the South of Groningen.

This new strategy, encouraged by the Ministry of Transports, the province and the City of Groningen, is a major issue in the urban and social renewal of the city, but also in the environmental area. First of all, this highway, acting as a real urban border, will be gradually trenched and “divided up” in order to improve and intensify the urban circulations and links.

Around the highway, the city has recommended high rise architecture in order to create and preserve green spaces at the bottom of the constructions. The preservation of those green spaces and their connections will allow an ecologic lane, opened to everyone and guaranteeing a new bio diversity.

In parallel, the city has started to work with different property developers for the realisation of office and/or social housing buildings and to appoint international architects. Several projects are under construction and in particular some offices by Un Studio and some housing by Mecanoo.

So, the Christelijke Woningstichting Patrimonium Company has ordered in 2007 to Dominique Perrault the construction of two mix-used buildings, rental social housing and offices, in the south-west of the city.

Located at the outskirts of Groningen, the parcel is surrounded by typical post war social housing blocks. Dominique Perrault will take advantage of the urban context to create the volumes of “La Liberté”. As the request was to build high up, the architect leans on this horizontality to create a crescendo of volumes.

The project comprises the construction of two square plan buildings: one tower of approximately 80 meters (tower A), and another of 40 meters high (tower B).

The buildings are both made up of a platform, entirely in glass, independent, with the same height (R+2) and accommodating the offices. As they are not taller than the nearby blocks, the platforms respect and extend their horizontality.

The housing blocks are hanging above the offices thanks to a 5 meters high terrace. In this “in-between”, only a core, sheltering the common spaces, brings an easy transition between the private spaces and the offices. At last, a footbridge, located at the same level and opened to the users, links up the both towers.

Through the treatment of the façades, Dominique Perrault creates a real dialogue between the both buildings and between the project and its urban environment. Whatever the viewpoint, the façades of the three housing blocks never offer the same treatment of colours – black, grey and whites. These shades of colour strengthen the stack impression and energize the city skyline.

Moreover some polished steel panels are placed perpendicularly to the facades, which punctuate the façades and multiply the perceptions of the building. Dominique Perrault delivers here social housings of quality, offering substantial dimensions and spaces. Each level has 5 apartments; all the apartments have 3 rooms and a wide average surface area.

The Dutch law enforces a totally deaf façade for the apartments facing the highway. This housing can’t have any opening window and there is no ventilation. Dominique Perrault plays with this imposition by articulating these apartments around glass inner loggias. These loggias, totally mobile and equipped with sophisticated filters, work as a real protection against noise pollution.

Finally the polished steel panels, set up at the loggias level, capture natural light and reflect it towards the apartments. These mirrors also offer to the residents an alternative outdoor vision.

“La Liberté” counts 120 apartments, split up in 15 different types with about 40 variants.

Dominique Perrault realizes a building opened to the city: through this artful manipulation of differences in scale these buildings have been designed to become a new landmark signal, creating a new urban landscape. 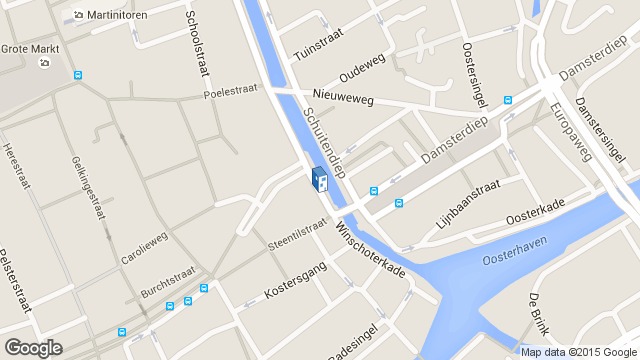