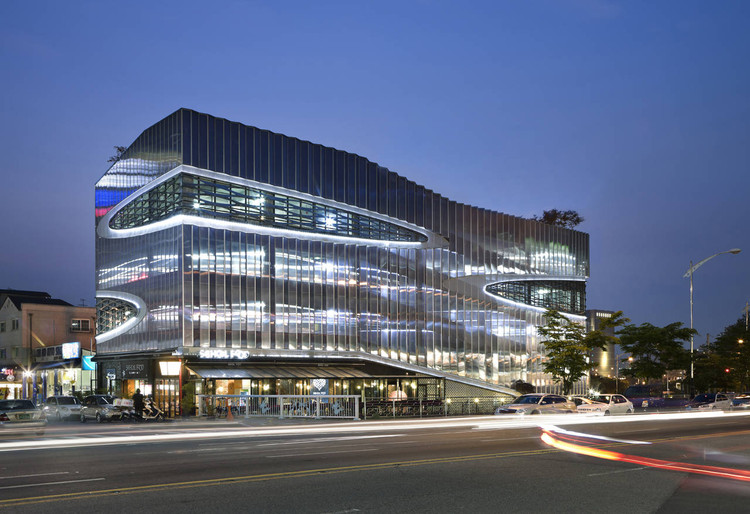 Parking lot either frankly reveals itself to be a parking lot without any consideration for design or surroundings, or disguises like a commercial facility. However, both cases are not welcomed in a city and ruin the city landscape.

Development districts of New Downtown in Korea that are fully filled with gigantic real estate goods only emphasize the legal maximum floor area ratio. The city identity is represented by the wall-covering signs not the presence of space nor void. The massive box lumps clutter the city with the logic of capitalism that is composed of investment, lease and presale, rather than the respective regional characteristics. This project intended to change the urban landscape through a proposition of a certain symbolically designed icon on a dry city.

In Korea for the development of a new town, developers parcel out the land in lots according to the usage such as a business area and a residence area, based on the Building codes. Parking lot zone also gets placed in major site following the business and residence area zoning program. A plot for a parking lot can be planned with cheaper land price and eased regulations than a business area.

However, it has a restriction that the commercial facility-to-parking facility ratio has to be 2 to 8. After all, deriving the land cost and construction cost with very 20% commercial area is the poor reality of Parking lot construction in Korea. This substandard business value causes the parking buildings to be built without any design concerns for lower construction price.

Furthermore, a vicious circle of gradually deteriorating surrounding urban environment continues because of the box-shaped boring parking buildings. The Herma parking building was started from a fundamental consideration of current parking lots in Korea.

- Maximizing the potential commercial uses of the land

- Composition of the parking ramp and the traffic line

In order to overcome a realistic limitation of a typical parking building, a new design that can increase the value of commercial facilities, including maximizing the commercial area of the 1st floor and changing the front landscaping area into the terrace, was needed. Through investing in a design that gives emphasis on commercial facilities rather than parking space, the value of the building and the land itself can rise. In other words, through an art gallery-like parking building the owner could get the attractiveand high rental condition of the commercial building.

Economics of filling and emptying

Owing to the limit of business program called ‘parking lot’ the construction cost also had lots of business limitations compared with other general buildings. For the economical construction the main structure was decided with the reinforced concrete having been economical from the construction viewpoint at that time, while for reducing the earthwork the basement was minimized and constructed with the method of open-cut. Like this the concrete volume is composed of the most economical form to fill the land. It is the volume to enable the maximum parking number of cars in the floor area ratio by enabling the maximum commercial area within the construction cost with a proper level. The mass filled like this was established based on the exhaustive economy.

The front part facing the river is a triangular unit, which is composed with 10 different angles from 60 degrees up to 150 degrees and reflects the scenes of light and city with the total units of more than 80. Contrarily the back surface of commercial area was finished with a flat surface. While the elevation plane toward the river was intended to express the speed of city by wrinkled image, the flat surface located in the western side directly projects the image toward Bojeong-dong café alley.

The polycarbonate used in this project has 5 layers.The external part was coated with violet color, and the internal part with white color. Additionally the external part was made with IR Coating and Coating surface treatment, which exerted such a feeling as the reflective surface of glass or metal depending on the angle of light. In the morning with the sun rising, it receives direct ray whose color of outer cover minutely appears to be white, and at noon indirect one whose color purely violet. In the afternoon with the sun setting, it reflects the evening glow and turns to be golden, while in the evening it reflects the internal lighting and external neon sign and directs unusual scenes.

Design of stainless opening part as a Metaphor

Another characteristic of land is the point that the four surfaces are independently opened without facing different buildings. According to such characteristics of land, the composition of elevation plane was designed to direct various images at each vanishing point. The opening part composed of stainless pattern consists of respectively different form and pattern at each vanishing point, whose design of automobile grill was applied inspired from the characteristics of this building’s being a facility for cars.

As such an opening part is differently open on each floor and elevation plane the natural ventilation is available, and it properly projects inside, due to being cut off from the external part it was designed so as not to recognize from outside the fact that this building is a parking lot.

Various grill patterns from different cars. It was applied to the pattern design of opening part of external cover.

The elevation surface composed of triangular panel facing toward the river. It reflects the urban light and speed through triangle wrinkles. The planar figure for ordering 635 polycarbonate panels and more than 930 different Stainless piece patterns.

The characteristics of exterior design exist in the panel with respectively different sizes individually combined above all. As known from the pattern of elevation plane with various expressions the polycarbonate panels used for 635 units of outer covers are all different in their sizes. Each panel differs in size with the spacing of a few centimeters, which was cut and carried in the factory one by one. The maximum length of panel is 12 meters long,due to the maximum specification of container box when imported. Each opening part is less than 12 meters wide, which divides the polycarbonate panel and creates respectively different elevation plane factors. It is combined with respectively different sizes of panel and stainless steel patterns.

Process of fabrication of STS frame and pattern

Exterior and interior views of stainless frame and pattern detail

The frames manufactured with zinc-galvanized pipes, not only play a role of making an exterior cladding form, but also is connected with the point of parametric change of stainless opening part pattern. In other words, the principle for stainless diamond-shaped pattern to be deformed is set at the standard of location of vertical angle pipe playing a role of structural node.

The stainless louvers were manufactured in the maximum size in the factory and welded on the zinc-galvanized pipes.At the same time as this 935 types of respectively different diamond-like pattern were cut with CNC with the loss rate minimized and welded into the units again at the site.That is, the elevation pattern changed suited to the spacing change of structural frame, through this process of rationalization the unity of design, manufacture of pattern, and reduction of construction period could be made.

When the filled volume was based on the weight of properties, the outer cover was designed under the subject of being light. Considering the construction cost the types of material were limited to 2~3 ones, especially the external clad structural frame was manufactured with easily available zinc-galvanized angle pipes, the polycarbonate, the main external clad material could be imported at a low price through negotiations with material businesses.

The pattern of opening part different at each vanishing point is variously open on each floor for the natural ventilation. That is, if the polycarbonate skin mutually projects the external and internal images, the opening part composed of stainless pattern externally and directly creates the image of building.The characteristics of parking lot program not needing any insulation material enabled the elevation pattern to be more freely composed.

Refraction of light, Difference of image

The polycarbonate panel composed of 5 plies of film reveals itself with the reflection due to the light source of external light.Contrary to this, at night it refracts the light sources outside by the internal lightings. According to the angle of vanishing point the outer cover changeably differs in its images reflecting the surrounding neon signs and night lightings, vehicular headlights.That is, during the daytime it receives light on the outer cover and wraps the internal space, but at night it refracts and projects the internal part outside.In other words, there is no fixed image here, its true nature infinitely changes. 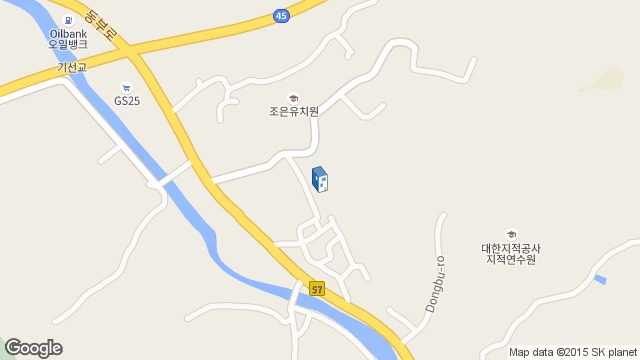 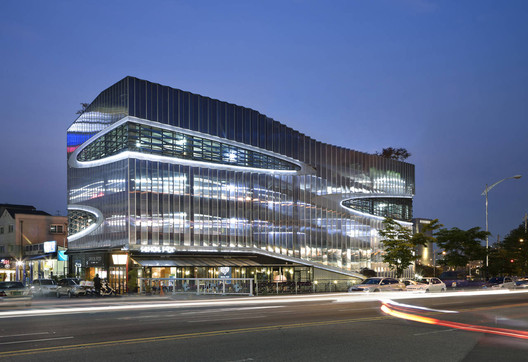