A secondary school project in Gando, Burkina Faso, a community center project in São Paulo, Brazil, and an urban renewal plan in Berlin, Germany are the winners of the Global Holcim Awards for 2012. These leading sustainable construction projects were selected from 15 finalist submissions by a jury of independent experts led by Enrique Norten. The finalists were the regional Holcim Awards 2011 winning projects that had been selected from more than 6,000 entries in 146 countries.

All 53 prize-winning projects at the regional level also competed for further prizes based on their contributions to sustainable construction through innovative building materials and construction technologies. The Global Holcim Innovation prizes conferred by a jury of materials and industry experts led by Harry Gugger went to projects in Switzerland, Germany and the United Kingdom.

Continue after the break to view the winning proposals! 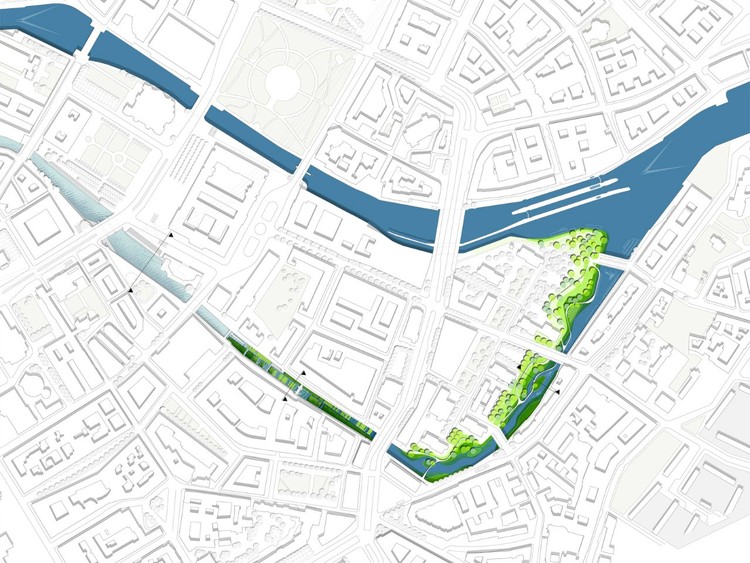 GOLD for a school in Burkina Faso: “Outstanding environment”

A school project in Burkina Faso that integrates social and environmental performance won the top prize of USD 200,000. The design for the school in the village of Gando was created by Diébédo Francis Kéré of Kéré Architecture in Berlin. Passive cooling during oppressive summer heat creates an indoor climate conducive to learning by routing air through subterranean tubes, planting vegetation, stack-effect air currents, and using double-skin roofs and façades. The project also improves social conditions by providing jobs and training, and restores the environment through reforestation.

Principal and Founder of TEN Arquitectos (Mexico/USA) and head of the jury, Enrique Norten, applauded the Global Holcim Awards Gold 2012 winning project for its successful approach to community development, climatic mitigation and aesthetics. “This beautiful school is not only an elegant design solution, but it also delivers training and employment, uses local building materials, and – with simple means – creates an outstanding environment from a social viewpoint and also in constructive terms,” he said.

SILVER for a multifunctional community center in Brazil: “Opportunities for the community”

The Global Holcim Awards Silver was awarded to a project that transforms an eroded landscape into a productive zone and dynamic public space. With about 100,000 inhabitants, the Paraisópolis favela in São Paulo is one of the world’s largest informal communities. The project led by architects Alfredo Brillembourg and Hubert Klumpner of Urban Think Tank, Brazil, includes a terraced public space with areas for urban agriculture, a water management system, a public amphitheater, a music school, a small concert hall, sports facilities, public spaces and transport infrastructure. It prevents further erosion and dangerous mudslides on the steep slopes and provides social and cultural infrastructure.

Enrique Norten praised the project for its unifying concept, premium cultural facilities, architectural quality, and integrated involvement of the local community in a socially-inclusive planning and management approach. “This important intervention has the capacity to provide satisfaction and opportunities for the local community that creates both connectivity and the construction in a viable way,” he said.

BRONZE for the “Flussbad” project in Germany: “Celebrating urban living”

An urban plan for transforming an under-utilized arm of the River Spree in Berlin into a natural 745m-long “swimming pool” won the Global Holcim Awards Bronze 2012. The Flussbad project in the heart of the historic city creates a swimming zone equivalent to 17 Olympic-sized pools, and provides a public urban recreation space for both residents and tourists adjacent to the Museuminsel. The project which includes a 1.8ha reed bed natural reserve with sub-surface sand bed filters to purify the water was developed by a team led by architects Jan and Tim Edler of realities united, Germany.

Enrique Norten explained that the project creates a direct and strong impact on the quality of urban life and positive ecological contribution through remediation of the city’s waterways. “The project celebrates urban living in one of the world’s greatest cities, and also honors the city’s connection to its waterways,” he said.

Global Holcim Innovation prizes of USD 150,000 in total were allocated by a separate jury and conferred for the first time. These prizes focus upon contributions to innovative building materials and construction technologies in the context of sustainable construction. This additional recognition of projects submitted in the Holcim Awards reflects the increasing emphasis on driving and fostering innovative new solutions by Holcim, the sponsor of the competition.

The Holcim Innovation 1st prize 2012 went to Gramazio & Kohler, Architektur und Digitale Fabrikation at the Swiss Federal Institute of Technology (ETH Zurich), for a construction technology using molds that combine existing processes and materials in a new way to fabricate cast-on-site concrete structures with reusable and digitally-fabricated wax formwork. This approach saves material and energy compared to traditional molds, such as expanded polystyrene blocks for single-use applications or flexed sheets of material which are limited to low curvatures. Principal of Harry Gugger Studio (Switzerland) and head of the Innovation prize jury, Harry Gugger, acclaimed the project as an advance in the use of molding for complex forms. “Until now, complex concrete forms have required molds that are difficult to build and created a great deal of waste – but this approach eliminates both of these challenges,” he said.

A team of four students from the AA School of Architecture in London, UK, won the Holcim Innovation 3rd prize for their research project on an efficient cast concrete fabrication system for geometrically complex building elements. This approach considers simultaneously the design of free and ambitious shapes, as well as the material efficiency and economic performance of the construction process.

The Holcim Awards for Sustainable Construction competition seeks innovative, future-oriented and tangible construction projects to promote sustainable responses to the technological, environmental, socioeconomic and cultural issues affecting building and construction on a local, regional and global level. To compare the diverse submissions, the juries use the “target issues” for sustainable construction which address the triple bottom line of environmental performance, social responsibility and economic efficiency and also cover architectural quality and the suitability for broad-scale application and multiplication of the project’s features. The competition has been run by the Swiss-based Holcim Foundation since 2004, offers USD 2 million in prize money per three-year cycle, and is supported by Holcim Ltd and its Group companies in more than 70 countries.

For more, check out the finalists here!