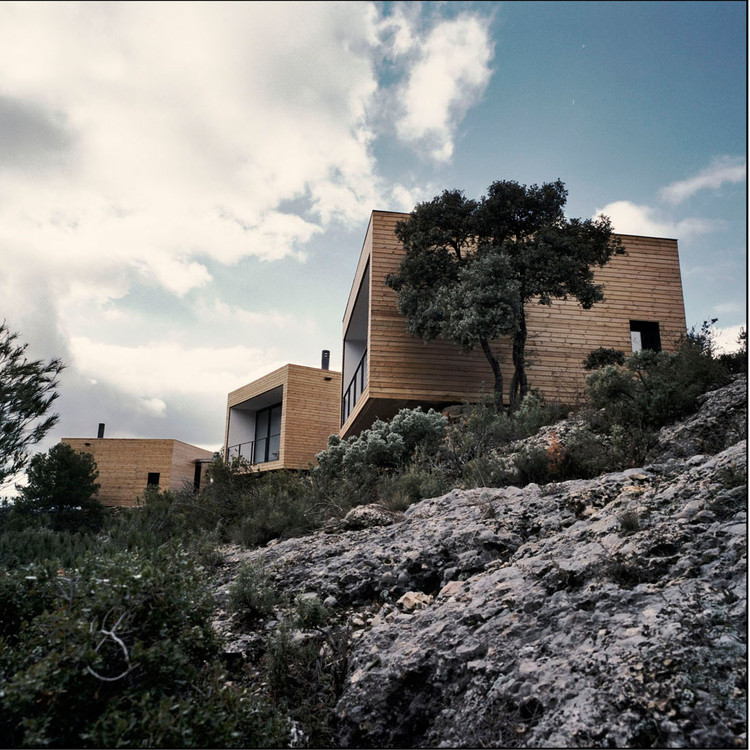 Text description provided by the architects. It will no longer be so easy to overlook Monroyo, in the heart of the county of Matarraña in Teruel (Spain). The usual stopovers to buy some of its ham or pick some wild mushrooms or truffes in season can now be lengthened thanks to a striking new hotel on the outskirts of the town, next to the Consolación Hermitage.

The hotel designed by the frm of Camprubí i Santacana Arquitectes is an innovative project comprising a central house containing the services and communal areas, plus ten rooms built independently.

The hotel, which has borrowed the name of the hermitage, is notable for its close links with the natural world. For a start, the rooms are not classical hotel bedrooms but individual cubes clad with wood, set 100 m from the hotel’s central nucleus on a hillside reached via a natural garden of rosemary and thyme. They are called kubes: 36 sq. m of simple, almost minimalist architecture. Black slate foor, a bathtub dug out of the selfsame foor, a bathroom with a separate shower, a suspended chimney, an armchair and a reading lamp.

Each cube has a large west-facing window and terrace, framing a view exclusively confned to rolling hills shrouded in pine trees, with not a single building in sight. Total privacy.

Once inside the Consolación, it is diffcult to leave. All the spaces in the central nucleus are fexible, as well as being interconnected to establish a sense of overall unity. Thus, the rest area can be used as a lounge or meeting room, while the reception turns into a bar at night.

The kitchen, which is usually out of bounds in a hotel, is a meeting point in the Consolación. It is open at all times and there is always food and drunk available on the counter. Breakfast, lunch and dinner are served in an old outhouse that has been converted into a dining room made of stone, wood, steel and glass. The dishes are based on seasonal produce from Matarraña.

The interior design in the Consolación is marked by its essentiality and comfort. Most of the fxed furniture forms part of the architecture. Warm, noble materials such as slate, copper-treated pine, wengue and metal sheeting dominate both the bedrooms and the central nucleus.

The Consolación is a small hotel with just twelve rooms. Ten of these are kubes and the other two occupy the first floor of the hermitage’s  – a baroque building, like the church, although the hermitage is much older (14th century). The dimensions, the  organization of the space and, above all, the concept of a hotel geared towards its guests are ideally suited to the organization of meetings of small groups or seminars.

The project is rounded off by an outdoor swimming pool overlooking the entire landscape, in a setting of the utmost privacy and peacefulness. This degree of isolation would be impossible in a normal hotel. The Consolación, however, was built with a view to friendly and enjoyable tranquillity, inspired by the architecture of Craig Ellwood, a mixture of the Germanic rationalism of Mies van der Rohe and the informalism of southern California.

If guests want to leave the hotel, what better than the Way of Santiago, which runs through the hermitage gate on the section between Tortosa and Zaragoza? There are, however, many other routes nearby, for both walkers and bikers, and these are popular with hunters and painters. Many of these paths lead to the River Matarraña, which can be crossed on walkways spanning the narrower canyons. Other routes come to an end in caves with prehistoric paintings that have been declared heritage sites. 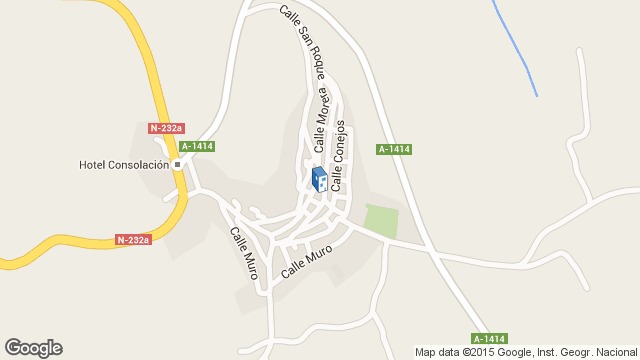 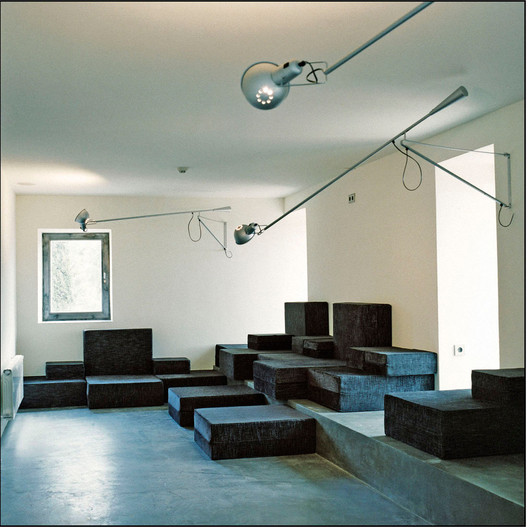