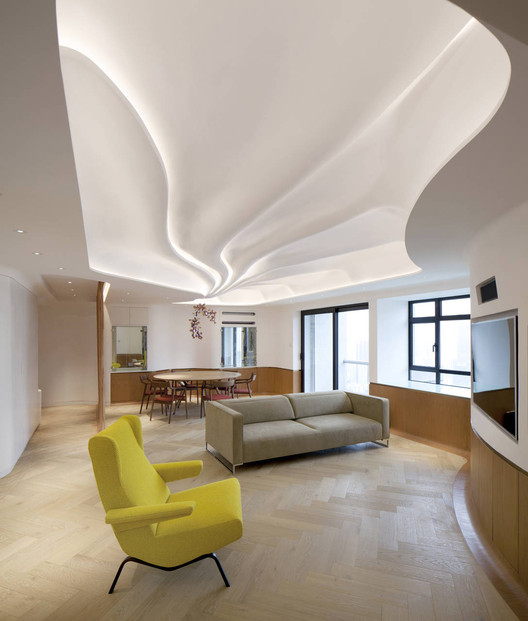 Text description provided by the architects. The brief for our design of the Jardine’s Lookout Flat was for a contemporary apartment with open space and light for an elderly client. The client wanted something extremely contemporary so she could leave all the detritus from her previously crowded flat behind, she wanted something unique with light natural materials, and something with plenty of storage should she need it.

All of these being a challenge anywhere were uniquely challenging in the climate of Hong Kong with local contractors unaccustomed to complex three dimensional forms a lack of access to high quality materials or longer construction timeframes as in Europe or America. The challenge of the flat also proved to be its making as it was a blend between high and low-tech that required expertise and craft to deliver much of the difficult forms rather than purely through an architect led process.

The project began with the intention to remove everything that was unnecessary. We proposed to eliminate one of the very small bedrooms and open up the main living space to create a generous open plan feeling in the living and sleeping areas. This was a challenge giving the age of the building all the internal walls were masonry with plaster and none of the existing window openings could be altered.

By removing one of the cramped bedrooms we were able to move and enlarge both bathrooms and provide a walk-in wardrobe. Further with a concern for the future of the client a hidden door was placed between the two larger bedrooms so that they can be joined as a singular suite making the space more flexible and ensuring is can be used well into their old age.

By opening up the main living space it became more generous but loss the separation between living and dining that the client also wanted. We proposed our design for the ceiling as a solution which joins both spaces as one but creates a focal centre over the dining area to create a sense of location and separation. Manufactured in China by cnc machines and finished by hand the ceiling was shipped in pieces and installed to create a singular relief element.

As a sort of hybrid between the baroque and relief ceilings seen in classical temple architecture the form was creates a point of reference for the dining area and chandelier light troughs full of LED striplights radiate out bathing the space in ambient light. Creating a second hybrid of the computational led design finished entirely by local craftsmen in the factory and on site was a synthesis between the very modern and very traditional way of making a plaster ceiling.

The dining area is further separated from the entry door with the creation of wooden screen. The screen was also manufactured completely by cnc technology and shipped in pieces to be assembled on site. It was finished by hand and takes a cue from traditional Chinese lattice work partitions but this time is a more contemporary geometric pattern which shifts as you walk along it.

On the opposing side of the entry from the screen is bespoke corian cabinetry for hidden shoe and coat storage with a built in seat. As it moves around the curved room is shifts to curved oak skirting wrapping the space and blending the oak parquet into the wall. All the round corners were a request for the design to be both continuous but free of dead corners so the energy of the room would flow according to Feng Shui principles. Further the curves allow ample opportunities to hide the normally unsightly air-conditioning units necessary in Hong Kong because of lack of central heat and air-conditioning.

Two vitrines behind the dining table are cut into the wall for display of collectibles while the main wall contains integrated television and audio-visual storage along a gentle curve which leads to the corridor compressing the height as you leave the main space. The first room is the guest bathroom with Corian cabinetry and bespoke marble flooring and sink. The mirror floats in front of the window to allow natural light to flood in and the tub is a Japanese style soaking tub with rain shower and small Bisazza glass tiles throughout. Thetap ware isDornbrachtwith Toto toilets from Japan.

After the guest bathroom is the guest room increases in height from the corridor with views over the bay in Hong Kong and coffered plaster ceiling with concealed LED lighting and built in oak storage. The large bay windows allow space for sitting and the storage unit can be removed to connect the guest bedroom to the main bedroom via a rotating partition. The master bedroom has the same oak skirting as the main space this time inverted to the ceiling forming a frame around the coffered opening emphasising the change in height of the space.

Generous space allows room for a lounge chair next to the ensuite bathroom. The master bathhas a marble deck-top and sink with the same Dornbrachttapware as the guest bathroom and Bisazza tiles throughout providing a lighter sensibility than the guest bath. It also contains a large shower room with seat and window instead of the soaking tub. The adjoin walk-in wardrobe has curved oak cabinetry with ample hanging and drawer storage, LED closet rods and large dressing table and mirrored wall for make-up.

The kitchen features new appliances from Miele, steam-oven, cook-top with sub-zero refrigerator, marble flooring and cooktops. The maids’ quarters are off the rear corridor with a private bathroom and washer and dryer and second refrigerator and storage in the back. All materials are low VOC or actually VOC absorbing in the case of the paint. The exterior walls are insulated, a rare practice in Hong Kong, the lighting is either LED or low-wattage halogen. Smart appliances reduce energy load and the wood is generally unstained and treated with a lime wash or with natural oil so that the apartment is less toxic and efficient than any of the other units in the building. The timeframe from design to completion was 11 months with a budget of approx. £400,000. 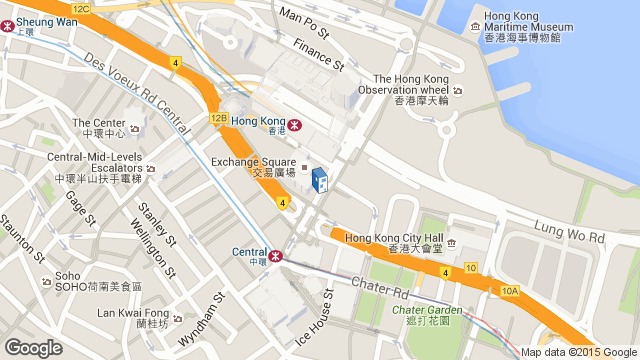 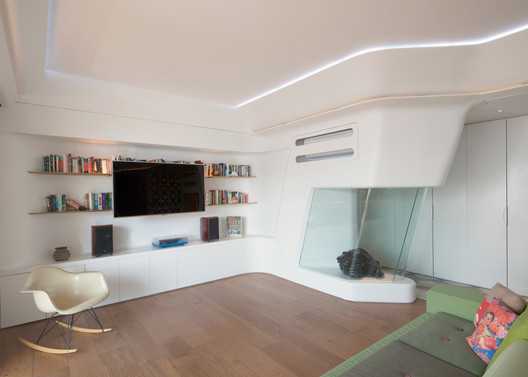