Space Group, based out of Oslo, Norway, recently completed the master plan for Lexington, Kentucky’s new Arena, Arts and Entertainment District. Beating out 13 other architectural firms, the 46 acre development will incorporate a basketball arena, convention center, performing arts center, school of the arts, offices, retail shops and housing. A unique aspect that was incorporated was the distinctive compactness of the existing downtown area and its proximity to residential neighborhoods. In order to accommodate predicted future growth, Space Group conceived a strategy that mirrors the footprint of the existing downtown district and projects it along an axis in line with the Rupp Arena. More info after the break. 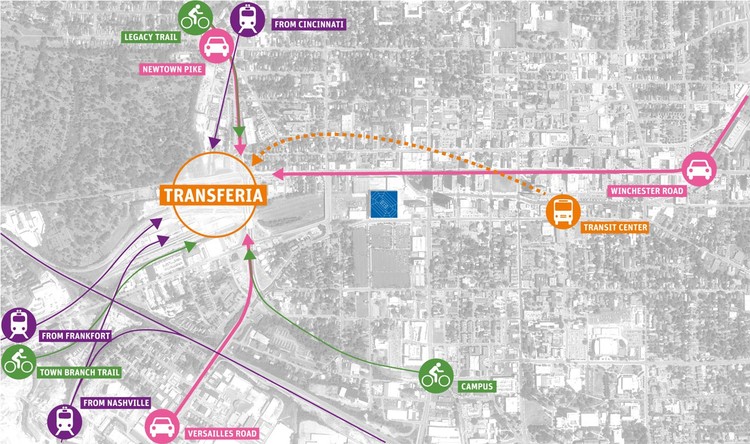 Space Group’s vision incorporates three unique districts – The Historic Center, The RAAED and the Distillery District – with an emphasis that all are walkable from the central node of the Rupp Arena. Another aspect of the design methodology includes a desire to maintain walkability and a pedestrian friendly programming scheme. This would include funneling high speed traffic into a corridor within the Central Business District, which in turn frees up Main Street for public foot traffic.

Designed to accommodate a myriad of opportunities, Space Group foresees the RAAED as “a framework for future development, not a prescribed building plan. Rather than trying to anticipate every need of tomorrow, we plan for the first expected steps, then develop a set of rules to aid the decision making process as future needs arise. The plan shows our hopes for the future of the district, but allows flexibility in its development concerning program recommendations.

If,  for example, additional housing is required, the district can accommodate this need.  If instead, a business accelerator zone would emerge, or the university would expand in the downtown, this can also become a possibility without compromising the integrity of the master plan.  Even still, if the city decides it would like to hold the district’s development after the first phase, the high street lot can continue as the recommended sports park indefinitely.  The RAAED master plan is robust enough to contain a multitude of possible scenarios.”