Save
Wang Shu by Alejandro Aravena
Share
Or
Copy

We had the exclusive opportunity to interview Pritzker Prize Jury Alejandro Aravena about Wang Shu’s work and the reasons of his selection as the 2012 Pritzker Prize laureate, where he cites extracts of conversations with the Chinese architect.

Wang Shu’s outstanding architecture may be the consequence of being able to combine talent and intelligence. This combination allows him to produce masterpieces when a monument is needed, but also very careful and contained architecture when a monument is not the case. The intensity of his work may be a consequence of his relative youth, but the precision and appropriateness of his operations talk of great maturity.

Consider Ningbo Museum of History: it is so powerful, so overwhelming that it deserves to be called a masterpiece. You don’t visit the building; you are hit by the building. I remember having felt the same only a few times in my life, like when visiting Kahn’s Parliament in Bangladesh or his Indian Institute of Management in Ahmedabad. Being “hit” by a building happens very rarely in architecture, because that kind of impact tends to belong more to music or film, where the experience of a piece can be extremely moving and touching to the point of altering the mood in a deep positive way. Unfortunately this cannot be transmitted by photographs.

Then there is his distinctive use of discarded materials coming from other constructions. That technique not only makes sense in terms of sustainability; it also introduces a history in the construction, giving a wall an “overdose of time” without having to wait for aging. It also transforms every part of the building into a unique unrepeatable piece: every centimeter is different from the next one. That variation within a unity, has not only aesthetic value, but it allows for the absorption of mistakes that an unskilled labor in a rather big volume might produce; it is idealism and pragmatism synthesized in a single element.

About this building technique, he said he was recovering a tradition that got almost lost, which consisted in using the materials that were left after disasters like earthquakes or typhoons, layering bricks, tiles and stones to repair a hole here, a crack over there. He just brought it to a different scale, to the scale of the whole building. The importance of recovering such a technique is pragmatic, historic and cultural. He said he believed that architecture is a collaborative work. By employing people that have a skill that he has not, there is a creative dialogue in the construction, a mutual teaching and learning process that allows everybody to contribute with their own knowledge. He, as the architect of the project, told the workers about certain things that they do not know, but when he went to the construction site, he was taught and told about things that he does not know.

That leads to the discussion about the creative control of the work. He said he was looking for the accuracy of the feeling not the perfection of the construction. And that he was sure his building had an accurate feeling. This is something I have to absolutely agree with, because if is there is something rather clear in his architecture, is that it is moving, powerful and that it works even at the level of feelings.

But then there is also the Hangzhou Academy of Arts, where a couple of dozens of buildings were needed, from pavilions to dorms, from classrooms and workshops to administrative buildings, all of them to be built in a rush. The question is about building the city fabric. Wang Shu is able to escape the potential risk of monotony of such a commission without overacting the pieces. He balances carefully individuality and capacity to belong to a group. He also manages to escape the risk of mediocrity or dissolution of quality of such a massive commission by governing the whole operation with certain containment. Finally he is able to understand that at such a scale, it is not only a question of the buildings, but also the construction of the space in between the buildings. The livelihood of the complex, flooded with student’s life everywhere, may be the ultimate proof of the success and appropriateness of the strategy.

All this makes his work at the same time encouraging and disturbing. The exceptional condition of his buildings was achieved using ordinary easily available materials, low skilled labor, working under a tight budget, with almost no time available for building nor for designing and with a small office. The majority of the architects of the world may find these conditions very familiar and similar to their own circumstances. It is encouraging because it makes people think that everybody could achieve it; it offers a kind of comfort and optimism to all those architects that also have to introduce quality into the built environment with almost no means. But exactly that, makes his work disturbing, because extraordinary buildings were achieved with very ordinary means. In this duality lies the potential to become a referent, because in order that to happen you need somebody close enough so that people identify themselves with the model and simultaneously distant enough so that people can consider it a challenge. Wang Shu is a notable example to show that the difference lies in how to frame the question, in how to understand constraints (instead of just complaining about them) and how to chose the right tools and operations to transcend the difficulties. The beauty of all this, is that he makes it look as if it was effortless; a naturalness only achieved by great architecture.

Wang Shu’s architecture has been able to synthesize the debate between being local or global. He has proved that these are not mutually exclusive terms. His architecture is anchored to the cultural, economical, environmental and aesthetic context. And yet he is able to produce a work with a universal reach. About his relation to the place, he said that his approach was a consequence of paying attention to the context, the circumstances and the constraints. In that sense, the using of the building technique was deeply connected to the local context. If he were to go elsewhere, he would spend some time there in order to understand what the conditions of the new place were and come up with an ad-hoc strategy. These reveal that his approach is neither nostalgic nor romantic, but rather pragmatic and sensitive. And as a consequence of that, his architecture is pertinent.

The same thing about history; his work is deeply anchored in the tradition, be it the tradition of the builders or the society inhabit his buildings. And yet he is able to produce not only a remarkable contemporary architecture but he is able transcend, as all great architecture does, to a certain level of timelessness.

Born in Chile 1967, Aravena established his private practice after graduating with a degree in architecture from the Universidad Catolica de Chile in Santiago in 1992. He has built portfolio primarily in the field of institutional and public buildings, such as the Siamese Towers, the Medical, Architecture, and Mathematic Schools all for the Catholic University in his native Chile and new residence and dining facilities for St. Edward’s University in Austin, Texas.

He is one of the founders and currently the Executive Director of Elemental, a “Do Tank” working on projects for social housing, public spaces, infrastructure, and transportation. Elemental’s is supported by the Universidad Catolica and Copec, the Chilean oil company.

Aravena has been visiting professor at Harvard Graduate School of Design and is the Elemental Professor at the Universidad Catolica de Chile. In 2004 he was chosen among the ’10 Design Vanguard Architects’ of the year by Architectural Record. 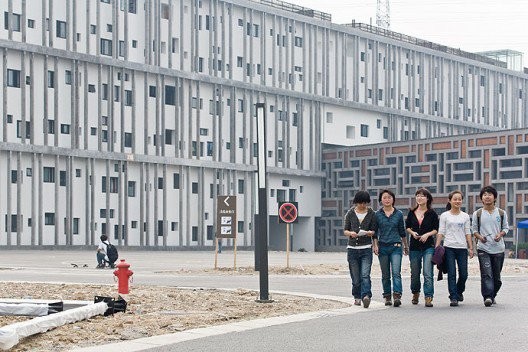