Save
AD Round Up: Skyscrapers Part I
Share
Or
Copy

Probably the most impressive thing for someone who visits for the first time cities like New York, Shanghai or Dubai is the ridiculous size of it’s buildings. So to finish this week of Round Up, we bring you previously featured skyscraper on ArchDaily.

Tour La Signal at La Defense, Paris / Ateliers Jean Nouve The La Defense is a 160 ha business district in the west of Paris, currently under a renewal plan to strengthen its place among the great international business districts. The renewal includes several high rise sustainable towers. One of this towers, the Tour Signal, entered an international closed competition for teams of architects/investors/developers, on which EPAD didn’t impose a site. The Tour Signal will thus endow the business district with a new landmark in 2013. The finalists for this project were (read more…)

Burj Dubai, tallest building in the world The Burj Dubai (set to be the tallest tower in the world, while the tallest structure as of now), is almost finished. Located in Dubai, it´s the centerpise of a mixed-use development that will include 30,000 homes, 9 hotels, 3 ha of parks, 19 residential towers, a man and a 12ha artificial lake. I decided to Google about the Burj Dubai a little, and i found an interesting interview at Wired with SOM´s structural engineer Bill Baker, telling the story behind the design, the structure and construction (read more…)

56 Leonard Street, New York / Herzog & de Meuron This 57-story residential in the Tribeca area will house 145 residences, each one with its own unique floor plan and private outdoor space. This typology makes the building look like a stack of houses, away from the traditional skyscraper form. I wonder how the concrete structure works on this building, which was done by consultant firm WSP Cantor Seinuk (who also worked on the Freedom Tower). With this height, it will surely impact the city skyline as you can see on the panoramic above (read more…) 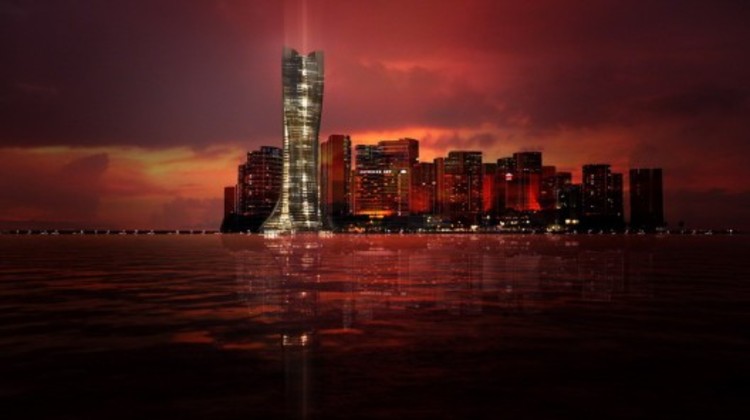 Michael Schumacher World Champion Tower in Dubai / L-A-V-A LAVA (Laboratory for Visionary Architecture) unveiled the design of the Michael Schumacher World Champion Tower in Dubai, the first project of a series of branded towers, a new concept by PNYG:COMPANY, a company focused on branding. I´ve heard about branded towers such at the Porsche Towers by OMA, but it´s the first time i hear about a building branded after a Formula 1 champion. The design of the 59 storey luxury tower is abstracted from the geometric laws of snowflakes and Formula 1 aerodynamics (read more…)

Jumeirah Gardens / SOM & Adrian Smith + Gordon Gill Architecture The master plan for this project was designed by SOM Chicago, and consists of a mixed-use development that incorporates low, medium, and high-density zones for business, residences, retail, leisure, and recreation – a city within a city, with an estimated cost of US$95 billion. The three main towers were comissioned to Chicago based architects AS+GG (Adrian Smith + Gordon Gill), The most impressive one -and the third tallest tower in the UAE- is 1 Dubai (read more…)