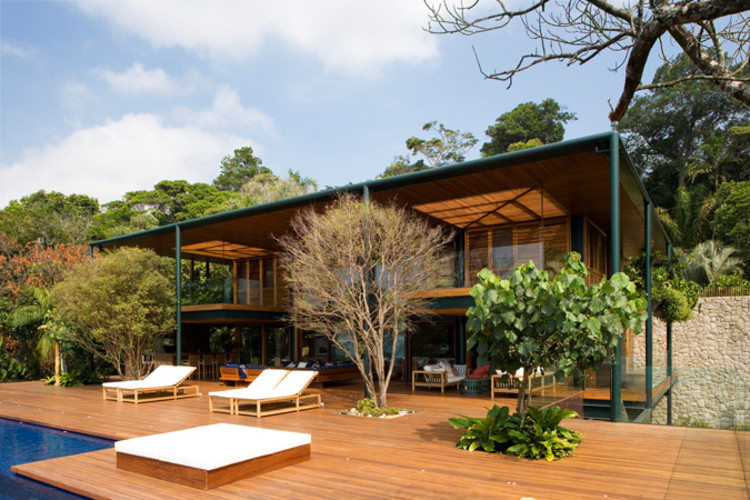 Text description provided by the architects. The whole idea of the project was created when Thiago was visiting the site. There, in front of the client, he sketched what later would be the transverse section of what was being proposed: a vacation house, for a couple and their two kids. A place where they could invite friends over frequently.

Designed to be a pavilion supported by only five pillars, with en-suites bedrooms, living room(s)/sitting room(s)/dining room(s), balconies and a pool facing the beautiful sight of Guarujá beach. Preserved terrain and vegetation. Facing the street, a low and discrete horizontal façade.

The sea is the main focus of the building's greatest view, but this didn't follow the best sun orientation. Willing to take advantage of the great view, the decision to place the pool away from the building was taken, having then the house east facing and the hillside throwing a shadow over the pool.

Due to the terrain's inclination, a structural deck 18m above the ground was used as a foundation to the development of a new area. Also, this deck had to be supported by only five tree-shaped concrete pillars because of the difficulties found on making the structural foundation. Above this deck the whole structure is metallic, which makes the building process simpler, since it's all made in loco.

Since the house is detached from the ground, it acts as a big tree shading the smaller ones, keeping the natural process of the forest and preserving it.

This platform consists of the whole social area of the house and a great external deck with the swimming pool lane in its extremity. The trees where planted in this level, giving a sensation of the house being in the canopy of the trees.

Apparently the house is limited to the two floors above this deck, but actually, most of the plan is placed below it.

The house is accessed from the second floor, where there are two en-suites bedrooms and also the entry hall. In the bottom floor we have the housekeeper's house, kitchen, service-area, steam bath, gym and four bedrooms.

The whole house was structured on steel and the doors and windows were made of wood and glass. The floor surface is covered of wood, giving the sensation of softness, and also making the deck look like floating. In the areas where their aren't any eaves, the walls are covered with copper and due to the rain exposure, the material will change naturally, making it look even more beautiful. Inside, wood is the main material, used, for example, on the balcony linings.

Accomplishing such a project was very gratifying for the architects. A big, large planned house witch disappears in the forest. A great house almost unnoticed among the trees.