In an article originally published on Plataforma Arquitectura, Guillermo Hevia Garcia describes his experience when visiting the Unité d’ Habitation in Marseille, France, also known as Cité Radieuse. On February 9th, the building was overcome by a large fire that was said to have been started due to a heating problem. The blaze took hundreds of firefighters nearly a day and a half to put it out. Eight residential units and four hotel rooms were destroyed, and approximately 35 other units were severely damaged by smoke or action relief. Most residents have returned home to the Unité d’ Habitation, Le Corbusier‘s thesis on domestic life, as they continue to live the communal life that the renowned architect dreamt up. 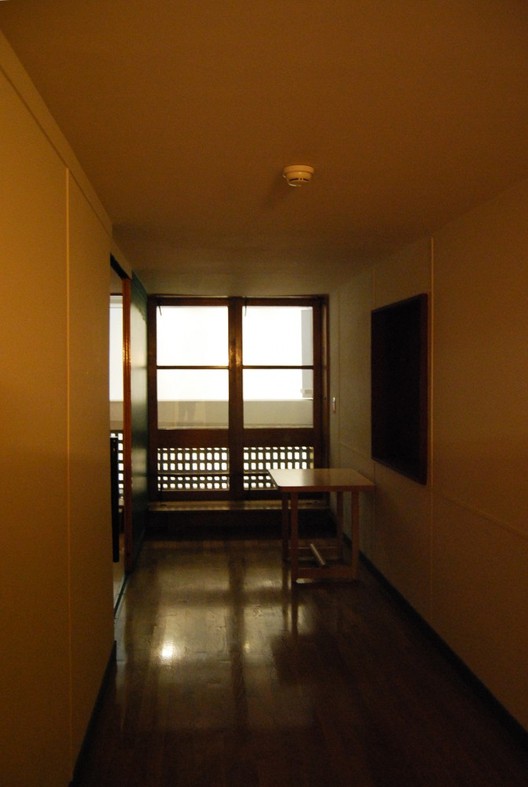 The eighteen-story “village” is an achievement of Le Corbusier’s own perceptions of architecture, both physically and conceptually. Unité d’ Habitation manifests the architect’s own five points of architecture along with his thesis on urban living. The five points, which all architecture students are familiar with, are addressed in this building:

1 – The building stands on pilotis – reinforced concrete stilts – which raises it, thereby freeing the ground for other programs and activities. 2 – The column based structure allows for a free facade, composed of lighter materials that can be punctured with windows for light and air. 3 – The structure also affords an open plan offering greater flexibility in the design of interior spaces. 4 – The facade is designed with a horizontal strip windows. 5 –  A roof garden brings the natural world back into the architecture, as if replacing the land that building itself displaced.

Garcia calls this building “the construction of a neighborhood” because Le Corbusier considers the value of communal and shared space over private space. Bedrooms are scaled down and tucked away. The units themselves are compact, taking up two levels and separating the bedroom from the public areas of the apartments. Furniture and details are designed specifically for the units; from these photographs it is obvious that some are even built into the walls, further emphasizing the effect of the open plan. Garcia calls this a “complete project: harmonious and comprehensive”.

Public spaces are celebrated; balconies bring light and air into the relatively small spaces the alleviate the scale.  Public amenities and facilities are abundant.  Le Corbusier planned to provide residents with as many necessities as possible: “community centers, nursery, gardens , pool, laundry, nursery, restaurant and even a bar, though many were not always fully realized”.

With such precise design, even the retro-fitting of this building harmonized with the existing ventilation and lighting arrangements, notes Garcia.  It is an example of what a collaboration of concept, structure and engineering can achieve.

Read more on the Unité d’ Habitation at AD Classics.