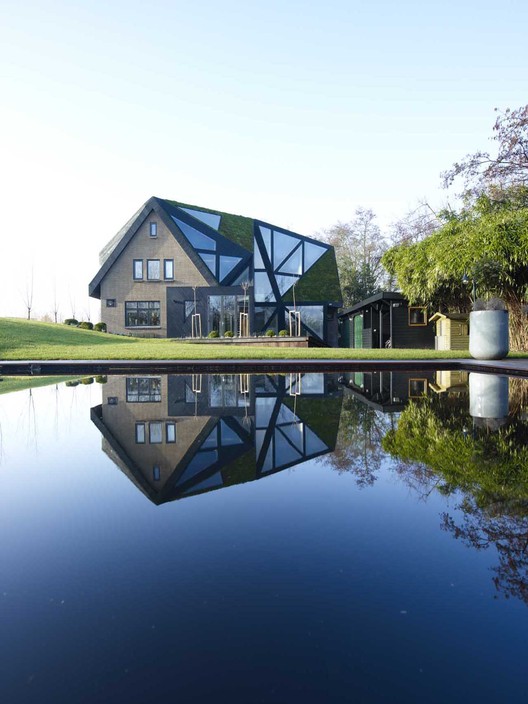 Living in a Structure

The project is a redevelopment of a villa located in a green neighbourhood of Rotterdam. The existing villa was composed of an eclectic set of buildings stuck together forming a strange architectural patchwork: An original building from the early 20th century, a first extension built in 1991 mirroring the house and a final touch in 2003 to add 3 rooms and several facilities just before the current owner moved in.

Although the existing house proved to be highly inefficient with a set of substantially unusable spaces, the clients really enjoyed the feeling and “the soul of the house”, in other words the task became providing a new house in preserving the spirit of the old house.

The only possible expansion of the foot print were the permission free extension from the two side walls of the original house and to extend to a new maximum height of 11m.

We have decided to use this given maximum envelop as a guide line to form the skin wrapping around the old house and shape new spaces for inhabitation.

The layout has been totally reorganized around a central void. A new staircase on the north wall is servicing first and second floor. Folds and facets were generated by an intuitive rationalism following what was permitted and what would benefit the space inside. This skin became the structure which sits like a hat on top of the existing and works as a load carrier to bring down the additional weight induced by the new floors and roofs.

The only construction method able to perform the precision and the speed of delivery requested by the client was prefabricated solid timber panel (Lenotec) used for the structure of the skin (roof, walls and floor).

This structure is expressed on the inside as well, it gives a sense of the new and the old: living in a new a structure together with the old walls. The transition between the 2 is subtle and gradual. As you go up in the house the relationship is changing. The new is gradually taking over the old. The spaces generated for inhabitation became very different and very specific enriching the life within in the house.

The outside makes reference to traditional Dutch farms using sedum green roofs and black stained ACCOYA* planks in a standard width. The lines of the cladding wrap around the house like a continuous new skin.

Beyond style or architectural aesthetic, our aim was to engage in a process of rediscovery of the vernacular, to introduce a dialogue between the old preserved next to the new and to explore a new language which reinterprets the old.

In the days of “Vacant NL” we are convinced that reclaiming the past is a form a rediscovery of a different future, away from the tabula rasa, a more sustainable and inspiring way of enriching the environment we live in. High-technology fast growing, sustainably-sourced wood more durable than teak