Save
The Shadow House / Liddicoat & Goldhill 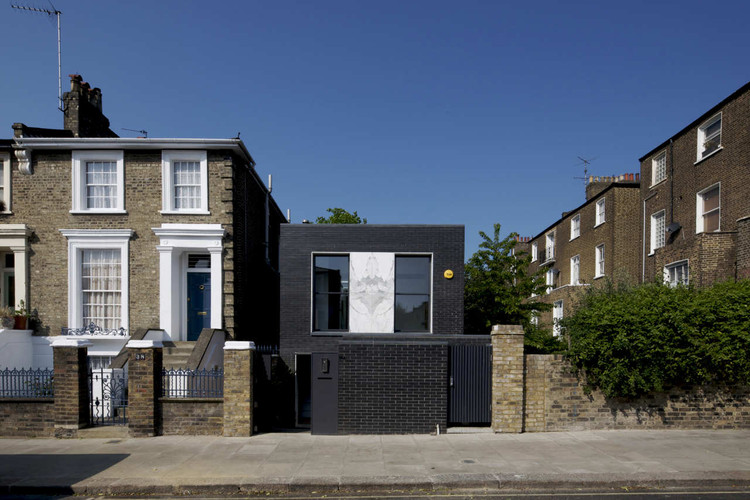 Text description provided by the architects. The Shadow House is a new build private house in Camden, North London. It has won a 2011 RIBA Award, Best small house of the year award at the British Homes Award 2011, received a commendation at the 2011 NLA Awards and was longlisted for the Manser Medal. We carried out the entire project ourselves, from finding the site, through planning, design, construction and manufacture of the fittings, fixtures and furniture.

The Shadow House is our own home, but is also an experiment in making a generic small city house. While working for other practices, we designed luxurious houses for private clients and worked on complex urban social housing developments; we were keen to extend this experience into building more modest single houses, in order to test our own ideas on living with less. We wanted to create intense interior spaces with maximum emotional effect. Aware of the overcrowded and overpriced London land market, we set out to find a suitable site.

Eventually, we found a 38m2 scrap of land on St Paul’s Crescent in the Camden Square Conservation Area, just north of Kings Cross. It comprised a tumbledown parking garage abutting a terrace of well-preserved late-Victorian houses. Previous owners had made repeated, unsuccessful attempts to win permission to build a new cottage there, and the Planning Inspectorate had upheld the refusals at Appeal. An application to build a new house on a similar plot nearby had resulted in Judicial Review and the attentions of the ODPM. Although we were conscious of the extreme sensitivity of building in this area, the site’s chequered history depressed its value sufficiently for us to buy the site (for £75k) late in the summer of 2006.

Our dealings with the Camden Planners were protracted and delicate. We realised that building on such a contentious site would require a collaborative approach, so we developed the design in close conversation with the Council’s officers. The maximum envelope for the building was determined by its relationship to its neighbours: many ancient lights overlooked our site. The greatest argument, however, was over the building’s external appearance. Keen to employ rapid, low-carbon construction, our earliest scheme was entirely timber-built. However, the conservation lobby’s opinion was that the house should instead reflect its tough, industrial-era context. We took an extreme response to this brief, proposing a dutch-format engineering brick with a black glazed finish resembling the cut face of coal. We contrasted this with sheer, frameless glazing, and with accents of white statuarietto marble, echoing the plaster reveals and porticoes of the surrounding Victorian architecture.

The tectonic of the house was therefore driven by its physical and legislative context. We had developed a robust and monolithic design, reinforced with an unforgiving, monochromatic skin. Because our budget was so tight, we planned to carry out as much work as possible ourselves and limited our palette to primary materials. We found these limits liberating rather than restricting: there is great poetry in practical things, so we reveled in finding simple means of assembling the house.

In order to give a sense of space to what could feel like very constrained rooms, it was important for us to be able to modulate the section and work with some of the heights. Different ceiling heights, adjusted by changes in the floor below and by different height roofs produce a range from 3m in the living room to 2.1m in the entrance area. This allowed us to give each space its own temperature, sound quality and sense of cosiness or airiness. There are certain knots of intensity, where the spatial and functional requirements of the house are tangled up.

The site lies on made ground, a mixture of mobile clay and spoil from the cutting of railway lines to Kings Cross and St Pancras. The substructure comprises reinforced concrete ground beams and piles, while the superstructure is in loadbearing masonry. Larch glu-lam beams (over-sized to maintain structural integrity in the event of fire) are laid directly into the brickwork to support the roof and floor structures. Floor finishes are in polished concrete, poured in-situ. Larch blockboard panels form a back-lit plafond français to the living room and bedroom, and line the deep internal reveals to form inviting window seats. The composition is completed in off-white fitted cabinetry, which we made in the house before sending them off-site to be spray-finished. Construction work began in August 2009 and we moved in, to our great delight, at the end of January 2011. 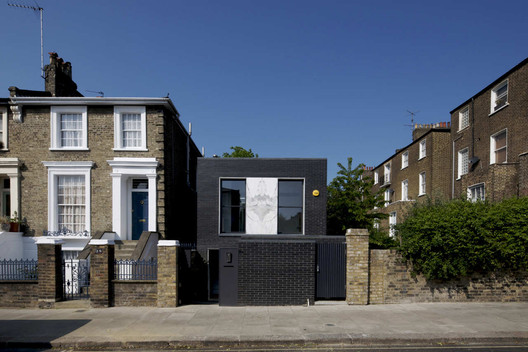