Save
The Ramp house / Archivirus 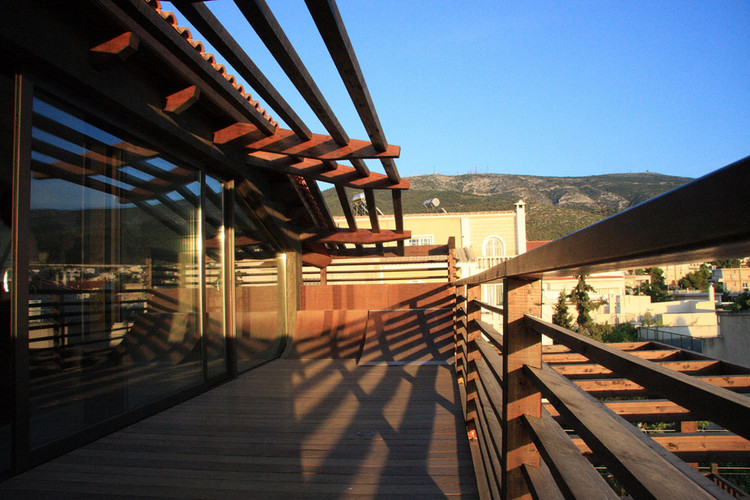 Text description provided by the architects. Athanasia Psaraki shared with us this house for a skater in Athens. Take a look at this impressive interior work.

The ramp house is a project which tries to reconsider and redefine the living space. The client requested a "skatable habitat". The result was a curved form interior, which set the whole house as well as the inhabitant's life, into motion. In that space, which actually was a roof addition to an existing three- stored building, I tried first of all to achieve a balanced co-existence between the old and the new. The dominant material was the wood and so I used a wooden pergola and wooden horizontal louvers, which wrap up the whole new structure, ergo connecting the old with the new in a harmonious way. As a result the new volume obtained independence while still remaining an inseparable part of the whole.

The ‘skateboarding' element is adopted in every possible way. When the client asked me to design a home where she could be able to skate, I immediately eliminated the idea of just putting a mini ramp in the living room. For me, the challenge of this project was to make a living space where the ramp, the bowl and all the interpretations of those terms would actually become the building elements for this space. I wanted to make a ‘ramp house' and not a ‘house with a ramp'. So I started imagining a space where the straight line would become curved and the flat surface would become a ramp or a bowl. Playing with these forms and with the variable transitions which offer, my main goal was to create a functional open space where aspects of daily life would adopt ‘ the feeling of acceleration' which is basically one of the main characteristics of skateboarding.

Having these in mind, I designed a home where the living room becomes a mini ramp and turns into a bowl to create a partition with the bedroom and the bathroom. Basic house elements such as the fireplace and storage units are hidden inside the ramp forms. I also tried to combine the street aesthetics of the skate scene using concrete and the cozy atmosphere of a house using wood. So concrete walls mold into the floor and then concrete turns into wood to create a ramp partition with the kitchen. In that way, the whole space is in actual motion and somebody can flow from one space to the other, skating or walking.