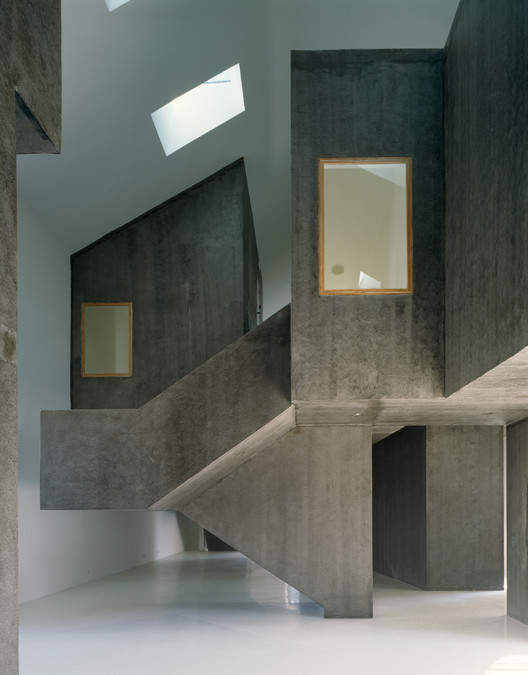 Text description provided by the architects. Since the last decade of the xx century, it has been usual, especially in the old Europe, the commission of projects demanding the conservation, renovation and conversion of constructions from a recent and distant past and from the most diverse typologies, and cultural matrices - This Interior architecture often becomes a field of experimentation for architectural ideas and one of the most challenging themes of the contemporary city. Not only because of urban conditions but also because of historical, social and political demands.

This preservation syndrome, sometimes leads to a overvaluation of the building structures. Age is not a warranty of architectural quality; on the contrary it is a natural process of selection. The adequacy to new and contemporary programs can be extremely liable to error. If in certain cases the possibility of adequacy is enrolled in the spatial identity of the building, in others the change of uses reveals itself inadequate, leading to an inconsistent meaning in the character of the building. Sometimes the preservation of the architecture we possess, can be, the worst manner of Destruction.

The project is part of a nationwide and governmental program – the Polis programme. The strategy was to revive cities by introducing new equipments such as the Environmental Monitoring and Interpretation Offices (EMIO) buildings. The aim was for this project to energize the rehabilitation of the city. The EMIO are public infrastructure for exhibition and other cultural events, concerning environmental and regional subjects.

The Project is a reconversion of a former rundown infrastructure that plays a relevant role in the social and urban context of the city of Tomar, although without any particular architectural interest. Located at the beginning of the city historical centre, the building has been subjected to several attachments and changes over the years, finding itself threatened by some decadence and inadequate for the intended use. Even though the building it’s protected under historic-preservation ordinances.

The new program comprises two distinct areas: a public area for exhibitions, meetings and cafeteria and a private area consisting of Lecture rooms and accommodation for invited artists. Confronted with the regulation plans, the design maintains the entire external perimeter construction, while its rundown interior is totally scooped out. Therefore and due to the functional program, the new construction establishes itself as the anatomy of the existing building. A new architectural body that runs throughout the available space, de-multiplying tectonically the finite interior into a new series of places and programmatic situations. The private areas are volumetrically defined within the structure and optimized for inhabitability. Each with its own access, atmosphere, identity, shape, use and dimension. The Social life, exhibitions and meetings take place in the interstitial space around the new structure, and are characterized and organized by the programmatic events defined by the enclosed spaces.

The spaces “born” from a visceral symbiosis and from the tension between this architectonic organism and the physical limits that keep him in captivity. The existing building acquires a new interior reading, being reconfigured and transformed in a unitarian and hermetic space with the use of white mate paint and mate epoxy resin coating. For the organism that contaminates the interior it was created and developed a kind of skin. A materiality intended to be abstract and simultaneously expressionistic. Through some kind of alchemy a substance was developed, a recipe, by conjoining some “ingredients”: Dark pigment, Acrylic resin and reflective glass spheres. The entrails of this animal were painted with glossy white paint and with glossy epoxy resin coating. A new interior within an interior interior. A machine capable of producing space, installed in a shell that was progressively deflated and then insufflated with a new and strange form of life.