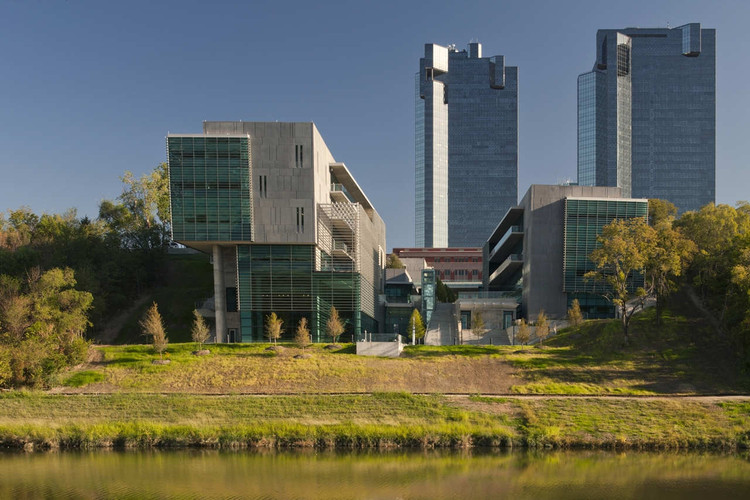 Selected by the Tarrant Regional Water District in 2003, Bing Thom Architects (BTA) developed the master plan for the redevelopment of 800 acres of reclaimed land adjacent to the downtown core of Fort Worth, Texas along the Trinity River. Called the Trinity Uptown Vision, and currently the largest urban redevelopment taking place in North America, the plan will transform this flood-prone zone into an urban waterfront neighborhood that will encourage young families to move back to the city’s core. In order for the new community to be truly balanced and sustainable, BTA felt strongly that the City needed a significant educational institution that would serve as an anchor downtown to serve the 10,000 new households that would be moving into the area. An opportunity arrived in 2006 when BTA and BennettBenner and Pettit (BBP, formerly Gideon Toal), the local associate architect, were comissioned by Tarrant County College District (TCC) to design a new downtown campus.

One of the fastest growing community college districts in Texas, Tarrant County College District had four existing, healthy campuses serving primarily suburban communities, but wanted a new downtown campus. They saw three immediate bonuses to a new, urban campus: the College District would be able to serve the population living near downtown (this population has significantly lower levels of education than other areas of the region in large part because of the lack of easy access to a College), moving TCC’s nursing and allied health programs to the new campus would bring those programs closer to existing downtown hospitals, and at the same time, people already working downtown would be able to participate in the school’s vibrant continuing education program. As a very community minded public institution, the college was interested in how their new campus could also be used as a way to improve the physical and urban environment of Fort Worth. In particular they realized that the campus could become a link between the downtown and the waterfront, thereby becoming a gateway to the Trinity Vision redevelopment project ensuring a strong connection with the rest of the city.

Because downtown Fort Worth sits above a heavily forested bluff, the Trinity River is only visible when you get to the water’s edge. In the design of the new TCC campus, one of BTA’s primary goals was to link downtown to its forgotten waterfront. By using the new campus to carve a pathway through the bluff down to the river, the firm was able to create a visual and physical link from the downtown to the river. A dynamic sequence of five campus buildings on either side of this central pathway descends down to the water through a series of courtyards and walkways. These buildings are scaled and arranged in such a way that they have become an extension of the city’s downtown street system, right to the river.

From the outset of the design process, BTA approached the buildings’ massing and orientation very deliberately in order to mitigate Fort Worth’s climate. BTA created a cluster of buildings with the potential to share energy sources in an efficient manner, while optimizing the micro climates between them. Adjacent buildings and structures are located in a way that creates naturally shaded outdoor spaces, improving user comfort and encouraging use of outdoor space throughout the year. In addition, BTA designed a series of relatively long, shallow buildings, as opposed to a single, deep building form, which maximizes the use of natural daylight to help save energy.

The massing of the buildings, in combination with their orientation and the prevailing climate, has a major impact on the building’s potential for energy efficiency. In a climate such as Fort Worth, minimizing the southern exposure of buildings and effectively shading windows is important as a passive means to control solar heat gain. These strategies reduce both the size and the operation of cooling and HVAC equipment. They are supplemented by the extensive incorporation of louvers at key locations on the exterior glazing and outdoor terraces, which help to reduce glare and solar heat gain, while preserving daylighting and views for the occupants.

To create a fully functional campus, the firm treated the exterior spaces as an extension of the building program, despite the challenge of the hot, dry climate. Regionally appropriate landscaping has been designed to create of a series of landscaped outdoor rooms with passive environmental systems that enable these microclimates to be habitable throughout the year.

This includes outdoor teaching areas, landscaped courtyards, plazas, and water features such as a fountain and waterfall. Shading is provided by trellises and by trees with large canopies, and cooling is created by natural evaporation from the fountain and waterfall. These become good social spaces that can be enjoyed by both campus users and the greater community as they discover their previously hidden waterfront.

Water features have been used extensively in the project and these perform three important roles. They provide a symbolic presence of the Trinity River in the downtown and act as a way finding system down to the river. It masks the heavy traffic noise, a particular issue as Belknap Street, one of the major arterials into the city, passes over the campus. It also has a positive educational impact as studies have shown that the calming effect of the sound of running water improves learning outcomes.

The campus not only acts as link between the downtown and the waterfront, it also provides a window onto nature. One enters the campus from a frenetic, highly urban environment accompanied with heavy automobile traffic. As you proceed through the cloistered spaces within the campus, you gradually lose the memory of the city until at the end you are totally immersed in nature by the river’s edge. 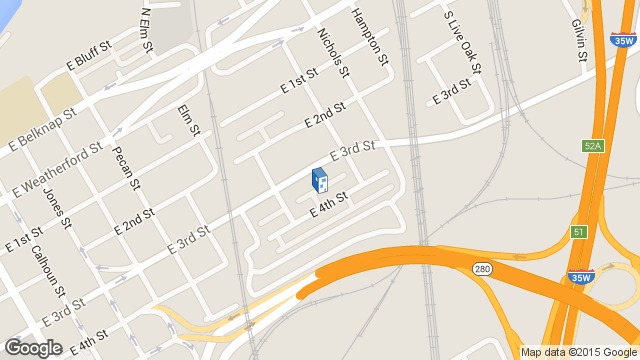 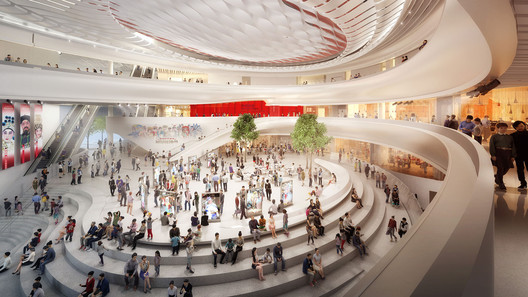