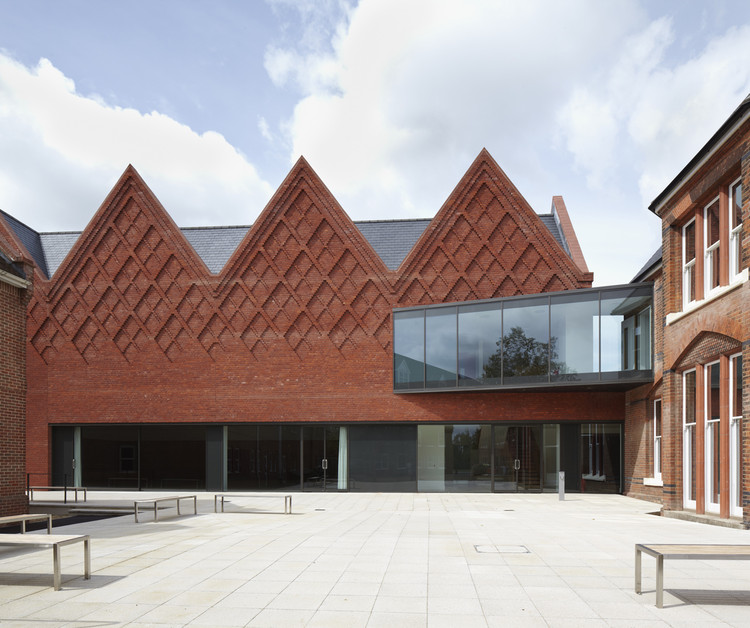 Cottrell and Vermeulen Architecture were appointed to the project in April 2006 through an invited competition. The project completed in June 2011. It comprises three main elements; a new classroom block, a study and social centre housed in a refurbished Victorian vicarage and a new 420 seat auditorium and assembly hall.

From our first ideas to the final buildings the design has changed considerably. It has been affected by two principle forces; the propriety of the response to the architectural setting as perceived by planners, conservation officers and English Heritage; and our increasing understanding of the way the school operates in the context of the school’s history and traditions.

The initial scheme proposed a multi-function decorated shed, which housed the diverse functions of the brief into a single building. The design re-interpreted local vernacular forms, materials and patterning which both reflected the architectural traditions of the site and also proposed a new architectural language for the school.

It subsequently became clear that one of the existing buildings, Otway House, would need to be retained. Originally a Victorian vicarage, it had been variously inhabited and adapted by the school, and its central position was initially felt to be an obstruction to re-thinking the site. However, faced with an immovable object, the scheme was re-conceived as an assembly of three programmatic elements, with a re-modelled Otway House at its centre. This tri-partite structure has survived to the final scheme whilst the language and forms have been continuously evolved and adapted.

In a context of local anxiety to non-traditional buildings, the designs were evolved from vernacular forms and materials. These were amplified, extended and transformed until they offered a simultaneously familiar and different architectural language.

The Classroom Block employs a traditional brickwork diaper pattern found within the school site. The pattern is scaled up, disassembled and wrapped over walls and roof. The Assembly Hall develops the diaper patterning into 3 dimensional bas relief. Whilst it recalls the modelled gables of Otway House, the treatment is extended across the whole gable, and wrapped around the entire building.

Otway House has been both restored and remodelled. The brief required continuous open space, but we have created interconnecting spaces which re-establish the original ‘rooms’ of the house. Colour is used to identify these individual rooms, with timber linings establishing new incisions and openings. The first floor ceiling has been removed, revealing the haphazard original roof structure.

The restoration of Otway House provides a rich architectural counterpoint to the new buildings. The domestic interiors provide a contrast to the focused spaces of the classrooms and the scale and volume of the hall. Its position on the site provides an anchor for the overall composition.

Whilst the programme of teaching, social and assembly is articulated as three distinct architectural elements, there will be a complex, overlapping pattern of everyday use. Spaces have been designed to accommodate different activities and use throughout the day and the academic year.

Externally, the tripartite composition allows a series of courtyards to be created between the new and existing buildings that work with the existing grain of the school and relate strongly to the new interiors. Primarily, the scheme completes the broad entrance courtyard which runs along one of Brentwood’s principle civic streets and through shifts in landscape level and materials, the scheme creates more intimate terraces and sunken courtyards that connect into the new buildings. 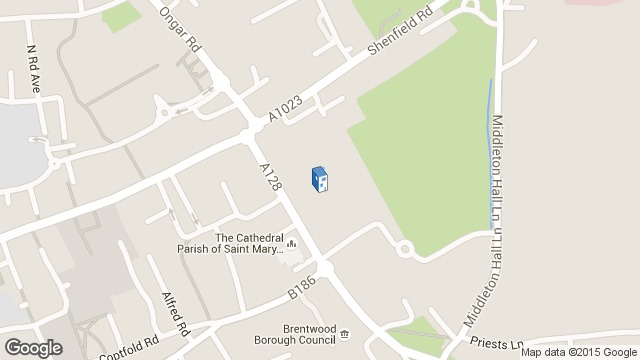 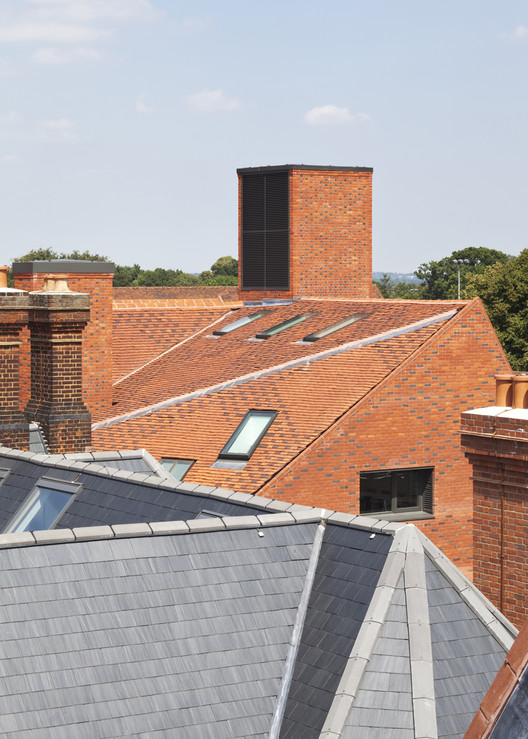