In celebration of the 75th anniversary of Taliesin West, Frank Lloyd Wright’s winter home, studio and architectural campus in Scottsdale, Arizona, Phoenix Art Museum presents Frank Lloyd Wright: Organic Architecture for the 21st Century. The exhibit will explore Wright and his relevance today through a survey of more than 40 projects shown through rarely seen drawings, models, furniture, films and photographs.

The Arizona exhibit will be open to the public from December 18th, 2011 to April 29th, 2012 at the Steele Gallery in the Phoenix Art Museum. 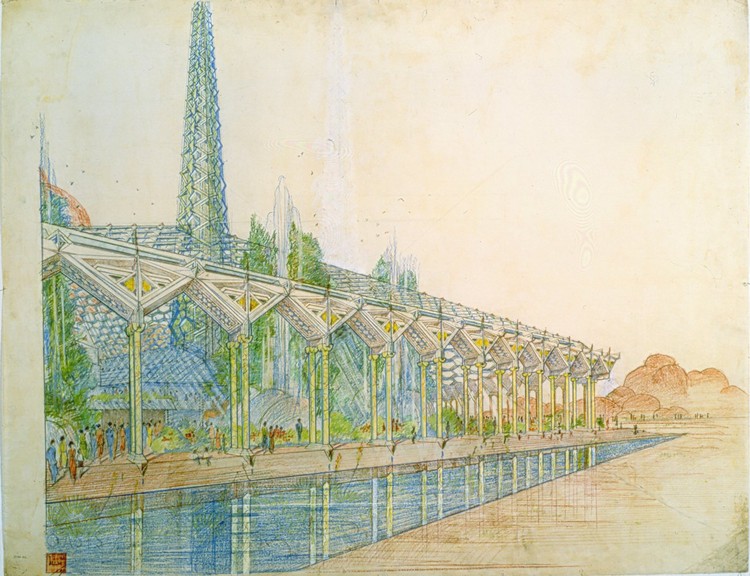 Regarded by many as the greatest American architect of the 20th century, Frank Lloyd Wright was a champion of organic architecture. His visionary designs emphasized use of natural materials, harmonious integration of building and landscape and high functionality. Many concepts developed in Wright’s revolutionary work are central to today’s sustainable, green architecture movement.

“Wright’s concerns with materials, efficient use of space, sustainable manufacturing, attention to local environment and use of natural light mirror those of contemporary architects worldwide,” commented James Ballinger, The Sybil Harrington Director, Phoenix Art Museum. “This exhibition provides an exciting forum for which Wright’s work can be re-examined and applied to concerns of the day. The Museum is privileged to have the opportunity to partner with the Frank Lloyd Wright Foundation and the Milwaukee Art Museum to bring this exhibition to the people of Arizona.”

The design of Arizona’s own Taliesin West exemplifies Wright’s architectural philosophy. The dramatic rugged landscape of the Sonoran Desert provided the inspiration for buildings that evolve and blend with the environment. Wright first came to Arizona in 1928 as a consultant for the Arizona Biltmore hotel. He returned the following year to work on another large resort commission, setting up camp near Chandler, Ariz. This project fell victim to the financial collapse of the 1930s and it would be another seven years before Wright would return to the area to begin building a permanent residence, Taliesin West, 10 miles north of Scottsdale. Over the next 22, years he designed dozens of Arizona residential and commercial structures, some of which were never built, eight of which are still in use today. To celebrate the state’s upcoming Centennial, a special focus of the exhibition will be a large model and drawings of a new Arizona State Capitol building proposed by Wright in 1957.

“Wright’s design theories and use of materials applied to all forms of architecture, whether a family residence, an office or a large-scale community planning project. His impact and presence can still be felt throughout the Valley today through his works or by works of those he inspired. Phoenix Art Museum’s first building, constructed in 1959, was designed by Alden B. Dow, a student of Wright’s. It’s both exciting and appropriate for the Museum to host this exhibition, and I look forward to the dialogue it will create in Arizona and beyond,” commented Ballinger.