Save
EggO House / A 69 Architects 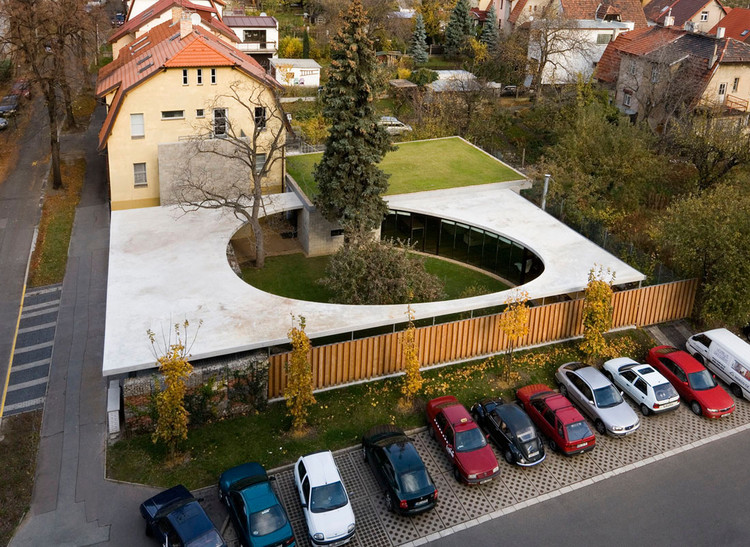 Text description provided by the architects. The purpose of the project was the construction of a self-contained dwelling unit in the garden of the recently reconstructed house. It was necessary to deal with the dominance of the opposite panel house facade, avoid confrontation with the architecture of the original house and find out a solution that would not parasite on the garden area.

The already existing fragments of the reconstruction of the original house became the starting point of the project: the set-in concrete slab with an out-placed exterior staircase, the wall by the entrance gateway and the parking lanes limited by the gabions. The existing walls made up from cement bricks in the direction of the planes X and Y were completed in the project with the horizontal slab in the plane Z. This slab became the main space organizational element and carrier of the fundamental motive; hole in the form of an ovoid.

The slab is a horizontal boundary-line and all the vertical relations are related to it. Its subtlety defines the new building against the compact façade rendering architecture of the existing house. It covers and unifies a number of functions; garages and storeroom of bicycles, access terrace with a storm lobby, main dwelling space, living terrace and the fencing. The ovoid in this slab defines a focus around which the new house unwinds. It defines ego of the house, the fundamental of which is not the architectural, but the natural space of the original garden with preserved full-grown trees. All the energy has been concentrated to this focus to create a psychological barrier against the dominance of the opposite prefabricated façade. The space and the light are escaping from the micro world of the garden through the distances and loopholes between the loosely composed slabs.

The house itself is, on the contrary strictly limited by the functional blocks. From the large entrance hall you will enter the autonomic study and the private zone. The private zone is strictly divided into intimate and social parts. Intimate spaces are oriented on the eastern facade with an own terrace, the social rooms into the atrium of the garden. The kitchen cabin in the form of a block is connected directly to the social spaces. The dining and living halls have character of a glassed pavilion - winter garden. The fragile space of it is enforced with a screen of the horizontal wall with a symbol of home - fireplace. It is connected directly to the covered living terrace.

As a compensation of the built-up area of the house originated a roof garden connected vertically to the apartment in the upper storey of the original reconstructed house. 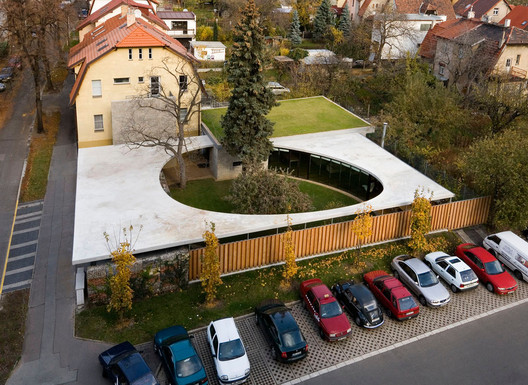