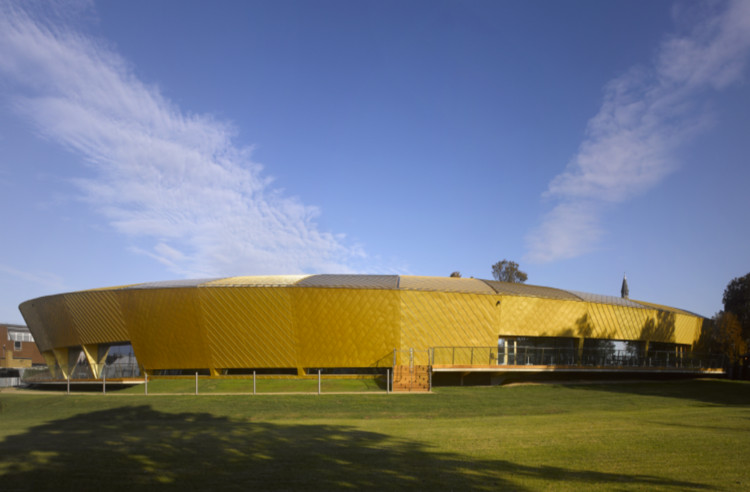 Text description provided by the architects. The building plan is a modified crescent that wraps around a D-shaped eighteenth-century garden. It slopes upwards in line with the site topography, culminating in a monumental portico which frames the lobby with full-height glazing. Contemporary in both form and cladding, built on a steel frame and wrapped in TECU Gold (a copper-aluminum alloy), the building engages with the site’s axial geometry and the preexisting period architecture.

All construction too place at elevations above the Scheduled Ancient Monument datum line because buried archaeological artefacts precluded excavation. The building therefore floats on a concrete raft foundation which required no deep excavation. One of those artefacts, The Berryfield Mosaic, is set into the floor beneath protective glass, providing a glimpse of the history buried beneath the building. Internal levels work with contours of the site; twelve different floor slab levels create subtle slopes that draw people through the building.

An interior promenade carries visitors from the vast lobby area through to the auditorium, University and Mosaic spaces, learning areas and main gallery spaces, ending up at the café restaurant, MUSA. The curved form of the building creates the sense of journey that allows visitors to encounter artwork as they walk through the building. The café restaurant at the end of this promenade provides social space lit by overhead clerestory windows; it includes an outdoor terrace which overlooks the adjacent gardens. Administrative space and galleries aligned on the inside arc of the building feature wide glazing that provides natural light and views of the adjacent eighteenth-century garden. Sensitive landscaping animates the open garden spaces, including lighting designed by artist Simon Periton.

In accordance with the design mandate to turn the traditional white cube gallery inside-out, extensive natural lighting and clear internal orientation is maintained by preserving sightlines to the outdoors. Floor-level strips of windows animate the design by revealing to visitors in the garden the movement of people inside, while also providing diffused light to the interior; clerestory windows give further natural light.

The scale openness of the main entrance emphasise the building’s accessibility and define it clearly as the point of entry. A fully glazed 11 metre façade slopes outward 15 degrees, minimizing reflections at ground level and making the entrance space more visible to the outdoors.

The site, near the town centre of one of Britian’s first Roman settlements, sits on Scheduled Ancient Monument land, with an intact Roman wall defining the southern boundary. Because archaeological remains are scattered throughout the site, maximum loads on the ground and a no-dig policy, the building had to impose a minimum load on the existing topography.

At the first effort in the revitalization of Colchester’s historic St Botolph’s Quarter, firstsite anchors the long-term development plan of an underused district. Rafael Viñoly Architects PC proposed a number of revisions to the original St Botolph’s Quarter master plan, all of which were subsequently adopted. The proposed building site was moved eastward, away from the town centre, redistributing the area of redevelopment. This facilitated a more sensitive relationship between the building and the historic assets of Colchester; specifically by preserving the character of the north-south Queen Street/St Botolph’s Street corridor, which connects the Colchester Castle Museum (to the north) and the Colchester Town train station (to the south) with a gently curing street to historical buildings.

The new location situates the building in a park, creating new public space as an appropriate setting for a cultural destination. (A bus station was relocated to accommodate this construction.) The site is now directly south of the eighteenth-century Grade-1 Listed East Hill House, which firstsite faces across a D-shaped garden that lends it its crescent shape, and whose Grade 2 Gothic Folly was separated from the house in the mid twentieth century by the construction of a bus station. View from the museum to the first-century Roman wall emphasise the historical importance of this ancient structure. Other prominent nearby structures include Grade-2 Listed twelfth century St James’s Church and the Minories Art Gallery, the latter a red-brick Georgian townhouse that served as firstsite’s original home, and which has been a gallery since the 1950s.

The auditorium is clad internally with diamond-patterned, suede-like acoustic fabric and overlapping European cherry timber shells. It will be used for film screenings, performances, lectures and presentations. Situated behind the Entrance space, it leads visitors on to the main gallery areas which are defined by a varied materials palette of an ammonia-fumed oak floor and angled/curving plasterboard walls. The Foundation for Sport and the Arts Gallery, a climate-controlled, museum-quality hanging space, is accompanied by many adaptable display opportunities. The flexible spatial configuration promotes interaction between visitors and artists, as spaces can be opened up to the galleries to encompass learning, artist residencies, and exhibitions. Programmed spaces are clustered, with the learning spaces in one area, conference and administration facilities in another, the galleries and artist spaces concentrated near the centre of the building, and the café restaurant MUSA at the far eastern end. 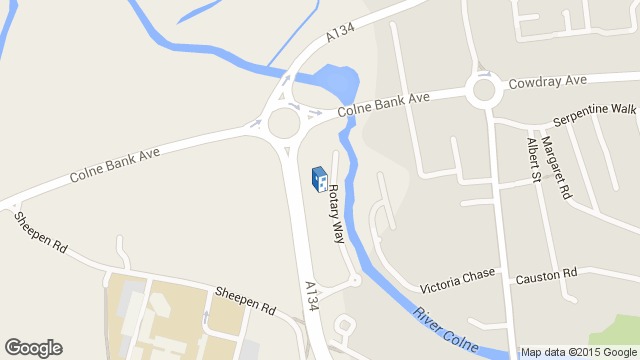