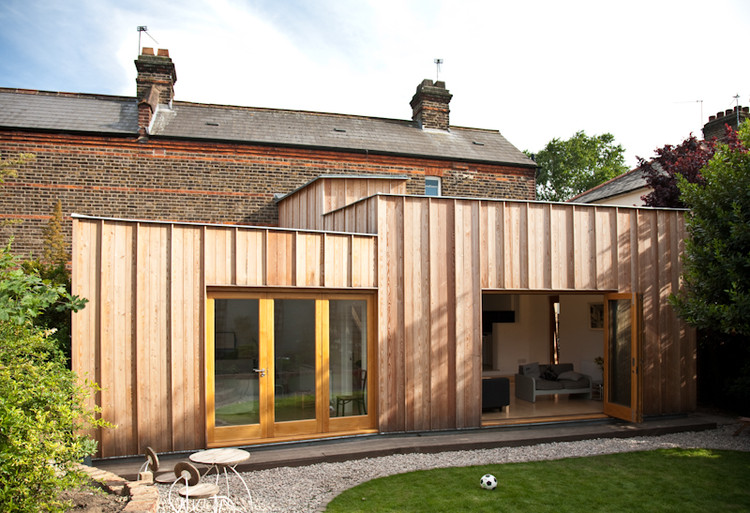 Text description provided by the architects. The project began one afternoon while the architect Neil Dusheiko was sitting with the client on their existing terrace discussing ideas about how to create more space for the family in the tiny terrace house. It was thought it would be interesting if the existing central staircase in the double fronted house, somehow continued up and over into the garden from the mid landing, and so the idea of extending the house came about. The clients wanted a house built entirely out of timber.

The concept was to create a series of different volumes to accommodate the various functions in an informal stack of boxes placed next to each other like packing creates. The extension exists as three timber containers sitting next to and on top of one another with a singular nature borne out of using one material. The differentiation of materials allows it to be read as a separate volume rather than mimic the brick character of the existing building. The new timber staircase forms a link with the existing house and connects to the mid landing, where the existing staircase continues down towards the front door.

The west façade sits in its sub-urban context, visible to the street and announces its presence with a rhythm of vertical cladding, which in turn reflects the neighbourhoods use of closed board fencing and timber sheds. The north façade, facing the garden, has an asymmetrical geometry, with its two planes cranked to catch the evening sun and to hold the space in the garden. A rhythm of projecting fins reveals a subtle layering of the façade, which comes to life as the sun projects shadows across the façade.

The material used for the floor was birch plywood and the structure is oak framed, clad in Siberian larch. The larch was is from sustainable sources and supplied by Vastern Timber. The larch was mounted onto battens fixed to Panelvent sheathing boards, which have a high racking strength but also allow for a water vapour open construction. Panelvent itself is made from wood chips and forest thinings, utilising a unique Masonite defibration system to combine low formaldehyde emissions in use and low embodied energy in manufacture.

The oak timber frame is made up of lattice structures which were so beautiful that during the build it was tempting to leave parts of the frame exposed on the inside of the extension. However, we decided to stay true to the concept of a wrapped timber box. The folding sliding doors and windows where constructed out of oak and are top hung. The doors are easy to open and fold away entirely to allow the garden to become part of the living space.

The floor was constructed out of a hard wearing birch plywood which was sealed with an acrylic coating which is both easy to clean and protects the surface from any moisture ingress. Existing openings inside the structure are framed in MDF, painted white to blend in with existing brickwork, also painted white, to reflect as much light as possible into the interior. A low step made of thermowood decking links the house to the garden and provides a low bench for seating. A new staircase constructed from birch plywood connects to the mid landing of the existing staircase, giving the up and over feel, which provided the original inspiration for the extension.

Extension for a turn of the century family home in Walthamstow. The playful design creates a much needed flexible living space and extra bedroom for the young family. The shape of the extension is designed to track the sun and create a positive space in the garden. The new structure is framed in oak and clad in Siberian Larch. The differentiation of materials allows it to be read as a separate volume rather than mimic the brick character of the existing building.

The design plays on the juxtaposition of natural light effects and artificial lighting. Through shadows cast on the facade by the timber fins a subtle layering is revealed. As time passes the facade is animated by the changing condition of light and shadow. The cranked geometry allows for maximum sun penetration and the shapes the garden space. The vertical fins are contrasted by a linear walkway serving as a bench connecting the house to the garden. 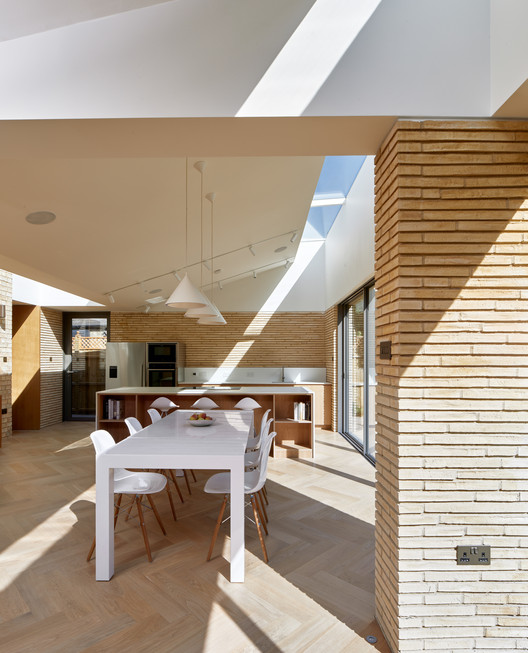