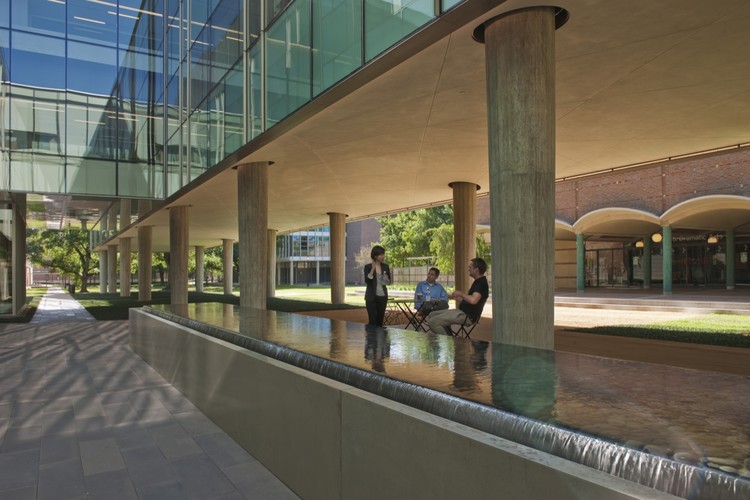 Text description provided by the architects. Project Statement: The Brockman Hall for Physics is a 111,000 SF facility housing classrooms, laboratory space, lecture halls and administrative offices for the Physics Department as well as physicists from the Electrical and Computer Engineering Department at Rice University in Houston, Texas. Driven by Rice University’s belief that some of the most important moments on campus are moments of informal discussion and debate outside of the classroom, the design of the building and landscape seeks to provide a multitude of spaces for lively and inspiring conversation. Sheltered from the sun by the building overhead, a ground-floor courtyard features reflecting pool, raised Ipe terrace and enhanced plaza with movable furniture. As the design developed, the Office of James Burnett was also asked to redesign the “Courtyard of Science”, an interstitial space between the wings of Brown Hall to the south. A grove of Honey Mesquites organizes the space and intimate decomposed granite courtyards with movable furniture create a number of social spaces.

Project Narrative: The Brockman Hall for Physics is a new 111,000 square foot facility at Rice University. Gathering faculty and researchers that were formerly located in several building across campus, Brockman Hall is the new home for physics research at Rice. The building and landscape aid this research by providing both a home for the laboratories, classrooms, and offices; and by supplying informal gathering spaces to foster conversation, debate, and cross pollination of ideas.

The tightly bound site lies between six existing buildings. The former open space was at the heart of the precinct of campus known as the Courtyard of Science. In an effort to minimize the impact of the building on the existing campus fabric, the building was split into two “bars” that were then allowed to separate and shift apart from one another. The southern bar sits firmly on the ground and mimics the long thin rectangular floor plates of the first science buildings on campus. The northern bar pulls away from the southern bar and lifts itself up off the ground plane, connecting to the southern bar with bridges at the second and third levels. This separation creates space for a landscape that flows continuously from existing courtyards to the east and west under the building. A sallyport to the south connects this landscape to a courtyard formed by the u-shaped plan of the neighboring George R. Brown building. Much of this new landscape sits atop a 31,000 square foot basement full of shielded laboratories.

The site itself is on a major cross axis of campus. The sallyport at the south bar aligns with this axis and allows it to continue to its former termination, Hamman Hall, built in 1958. The forecourt plaza at Hamman Hall was removed to allow for the construction of Brockman Hall. Hamman Hall now sits on a plinth of granite stairs that descend into grass to the east and west, and a decomposed granite court along the axis. The lifting of the north bar allows Hamman Hall room to breathe. The strongly symmetrical façade of Hamman continues to terminate the campus cross-axis and provides the Brockman landscape with a backdrop and sense of enclosure. While reinforcing the strong axial organization of campus in the north south direction, the landscape creates a counter flow to the east and west. By extending a walk that runs parallel to the long dimensions of the buildings in the campus precinct, three formerly separate courts are strongly linked.

The space below the north bar of Brockman Hall becomes the centerpiece of this composition. Special pavers in the sallyport flow out to the north and then along the major east west linking path. The decomposed granite court provides a central gathering space. A fountain is introduced asymmetrically to the east to provide both a cooling effect and a reflecting surface to allow natural light to play off of the underside of the north bar. Linked to the fountain is an Ipe deck. The deck is raised up one foot to provide a quiet space just off the path for more private gathering. The ground plane below the north bar is planted with a field of Ophiopogon japonicus’Nana’ (Dwarf Mondo Grass). The planting becomes an abstract plain that reflects the elevated structure above and hints at the laboratories underneath. Beyond the building site, the landscape responds to the existing campus fabric and brings these materials into the composition allowing for a seamless flow between old and new.

Brockman Hall, located north of George R. Brown Hall, is remarkable in a number of ways: It was designed, constructed and occupied in just 33 months; it brings together faculty and students who formerly worked in five separate buildings scattered broadly across the campus; it is both a carefully refined 21st-century research facility and one of the most environmentally sustainable buildings at Rice; and it maintains much of the outdoor space that previously existed on Rice's Science Quadrangle.

The building is composed of two parallel, rectilinear, spatial "bars" that are oriented east to west and connected by glass-enclosed bridges across an open passage that admits natural light and outdoor breezes. The larger south bar houses laboratories, faculty and research offices, a 150-seat lecture hall and a rooftop astronomical observatory. The elevated two-story north bar houses faculty, student and departmental offices and meeting spaces.

The open space beneath the north bar is framed by a "loggia" of tapered concrete columns that form an outdoor room, with shaded areas for class meetings, casual gathering and circulation. Beneath this serene outdoor oasis lies a sensitive and sophisticated complex of laboratories. Designed for vibration-sensitive atomic, molecular and optical physics and condensed-matter research, the hermetically controlled basement laboratories are stabilized on a two-foot-deep concrete slab and isolated from all the building's mechanical systems.

Text provided by The Office of James Burnett. 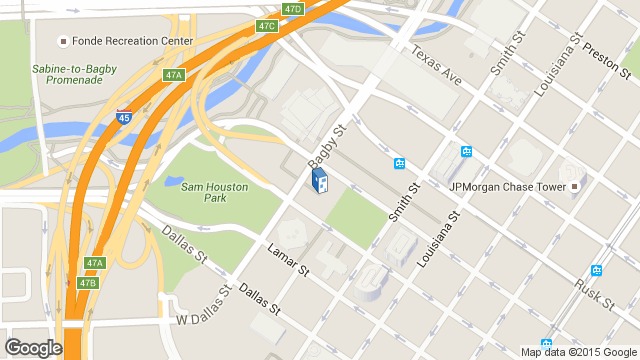